For the last several weeks, I have been conducting experiments with etching on the waterjet — a digital fabrication machine that emits a 55,000 psi stream of water, usually used for precision cutting. The site for this activity is Autodesk Pier 9 Creative Workshops. I continue to have access to their amazing fabrication machines, where I work part-time as one of their Shop Staff.

My recent artwork focuses on writing software code that transforms datasets into sculptures and installations, essentially physical data-visualizations. One of my new projects is called Strewn Fields, which is part of my work as an artist-in-residence with the SETI Institute. I am collaborating with the SETI research scientist, Peter Jenniskens, who is a leading expert on meteor showers and meteorite impacts. My artwork will be a series of data-visualizations of meteorite impacts at four different sites around the globe.

While the waterjet is normally used for cutting stiff materials like thick steel, it can etch using lower water pressure rather than pierce the material. OMAX — the company that makes the waterjet that we use at Pier 9 —  does provide a simple etching software package called Intelli-ETCH. The problem is that it will etch the entire surface of the material. This is appropriate for some artwork, such as my Bad Data series, where I wanted to simulate raster lines. 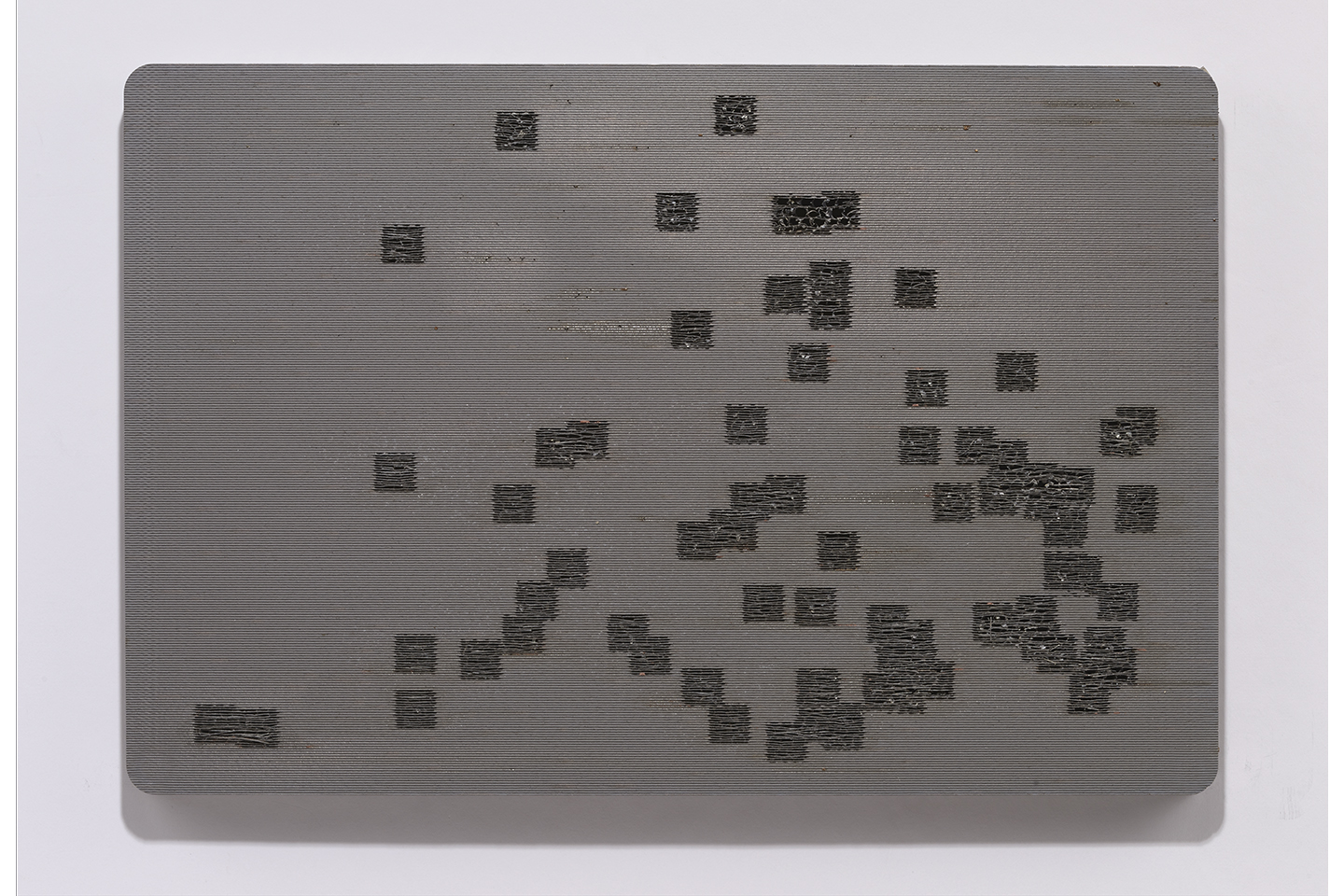 The technique and skills that I apply to my artistic practice is to write custom software that generates specific files for digital fabrication machines: laser-cutters, 3D printers, the waterjet and CNC machines. The look-and-feel is unique, unlike using conventional tools that artists often work with.

For meteorite impacts, I first map data like the pattern below (this is from a 2008 asteroid impact). For these impacts, it doesn’t make sense to etch the entire surface of my material, but rather, just pockets, simulating how a meteorite might hit the earth.

I could go the route of working with a CAM package and generating paths that work with the OMAX Waterjet. Fusion 360 even offers a pathway to this. However, I am dealing with four different datasets, each with 400-600 data points. It just doesn’t make sense to go from a 2D mapping, into a 3D package, generate 3D tool paths and then back to (essentially) a 2D profiling machine.

So, I worked on generating my own tool paths using Open Frameworks, which outputs simple vector shapes based on the size of data. For the tool paths, I settled on using spirals rather than left-to-right traverses, which spends too much time on the outside of the material, and blows it out. The spirals produce very pleasing results.

My first tests were on some stainless steel scrap and you can see the results here, with the jagged areas where the water eats away at the material, which is the desired effect. I also found that you have to start the etching from the outside of the spiral and then wind towards the inside. If you start from the inside and go out, you get a nipple, like on the middle right of this test, where the water-jet has to essentially “warm-up”. I’m still getting the center divots, but am working to solve this problem.

This was a promising test, as the non-pocketed surface doesn’t get etched at all and the etching is relatively quick. 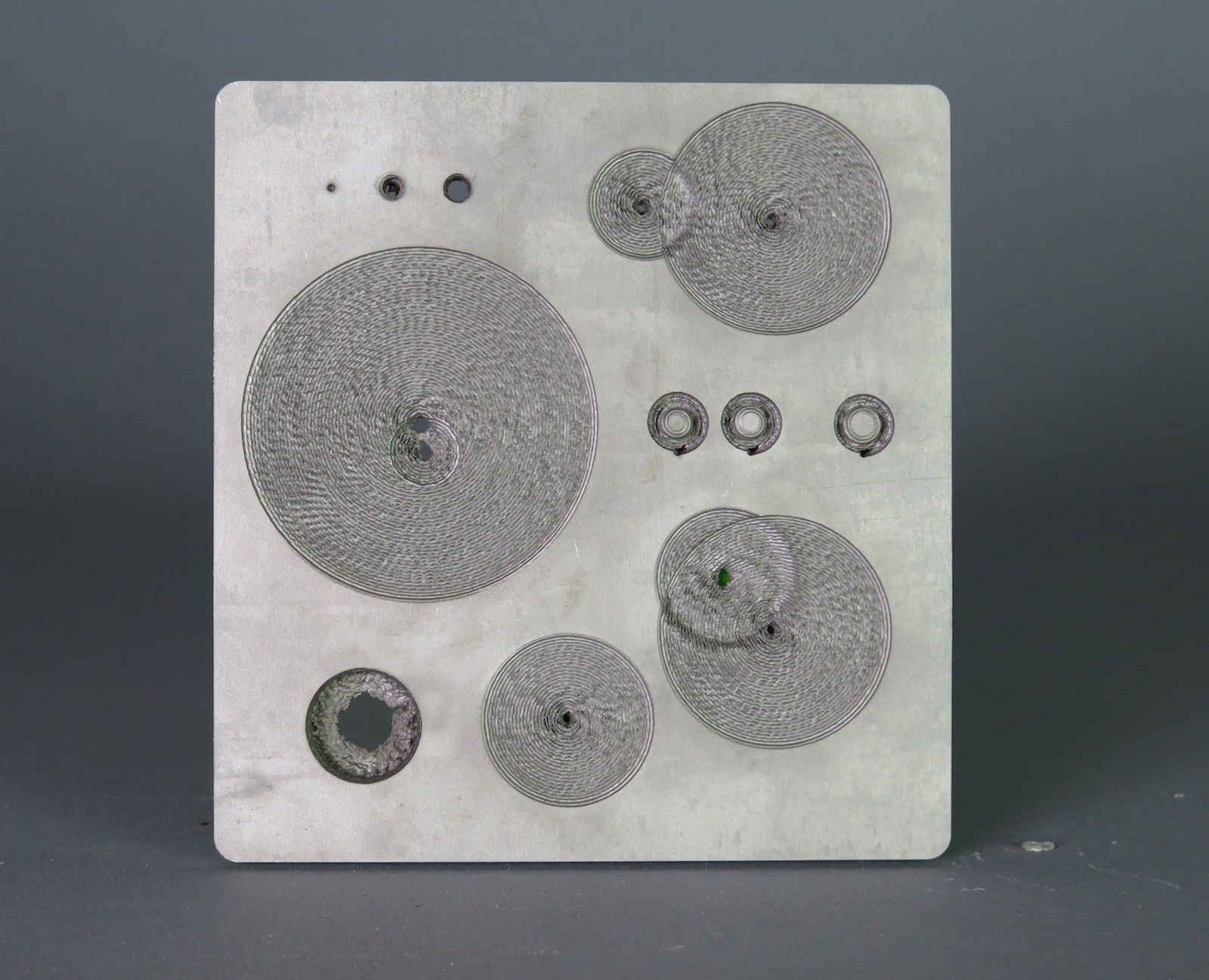 I showed this test to other people and received many raised eyebrows of curiosity. I became more diligent in my test samples and produces this etch sample with 8 spirals, with an interior path ranging from 2mm to 9mm to test on a variety of materials. 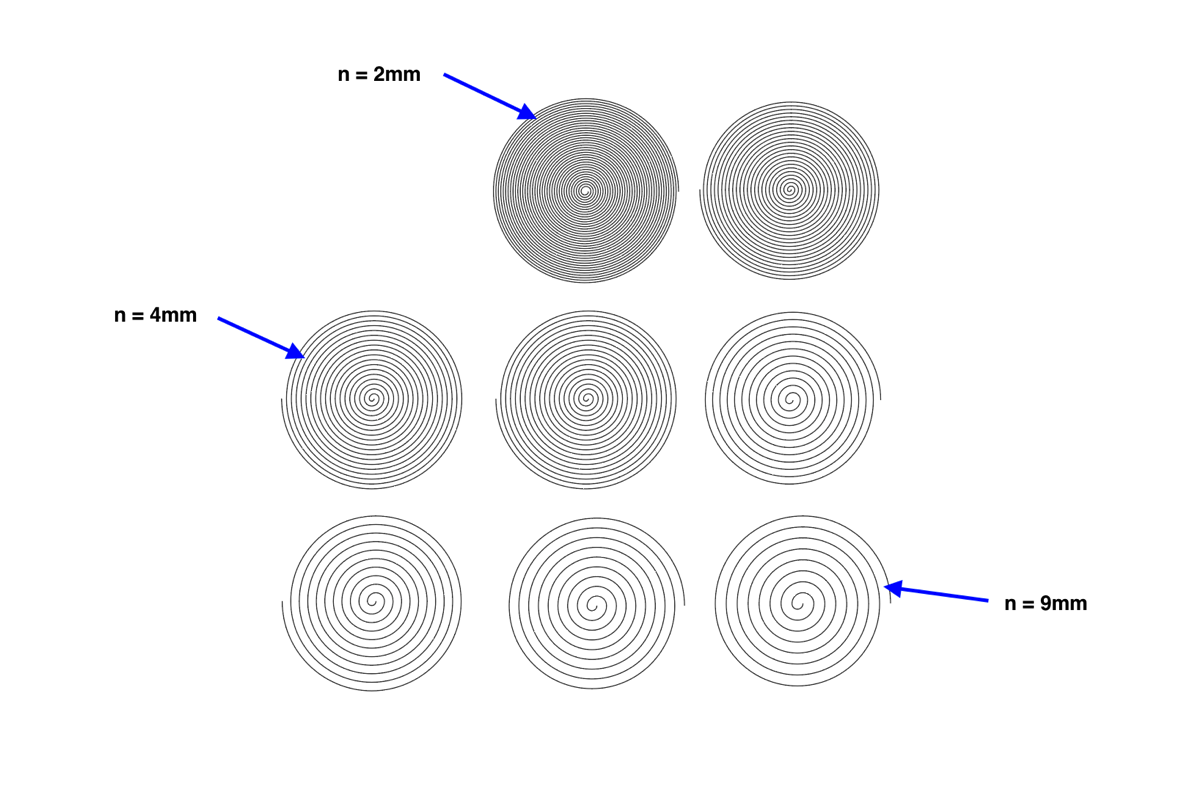 I was excited about this material, an acrylic composite that I had leftover from a landscape project. It is 1/2″ thick with green on one side and a semi-translucent white on the other. However, as you can see, the water-jet is too powerful and ends up shattering the edges, which is less than desirable. 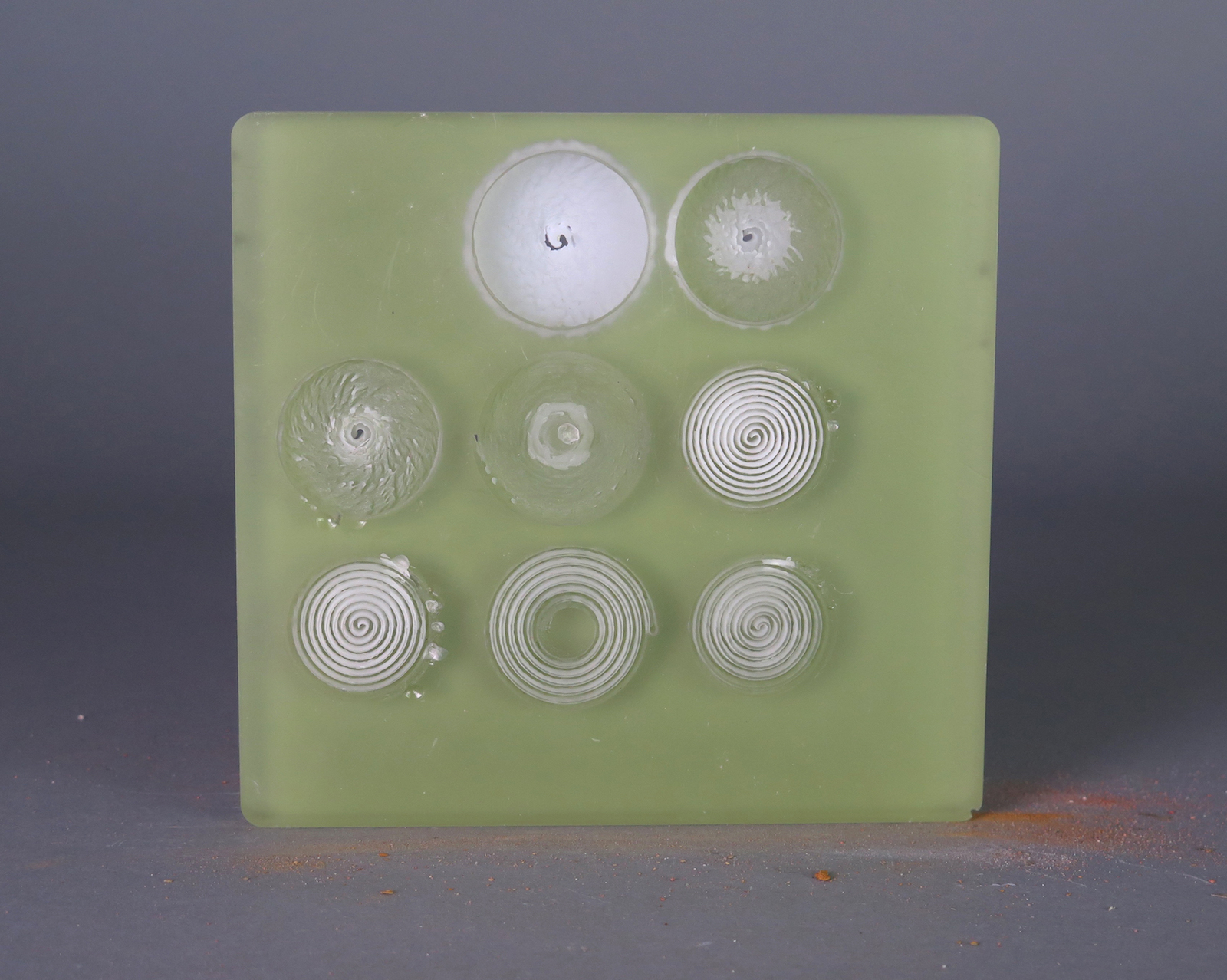 And then I began to survey various stone samples. I began with scavenging some material from Building Resources, which had an assortment of unnamed, cheap tiles and other samples.

Forgive me…I wish I hadn’t sat in the back row of “Rocks for Jocks” in college. Who knew that a couple decades later, I would actually need some knowledge of geology to make artwork?

I began with some harder stone — standard countertop stuff like marble and granite. I liked seeing how the spiral breaks down along the way. But, there is clearly not enough contrast. It just doesn’t look that good. 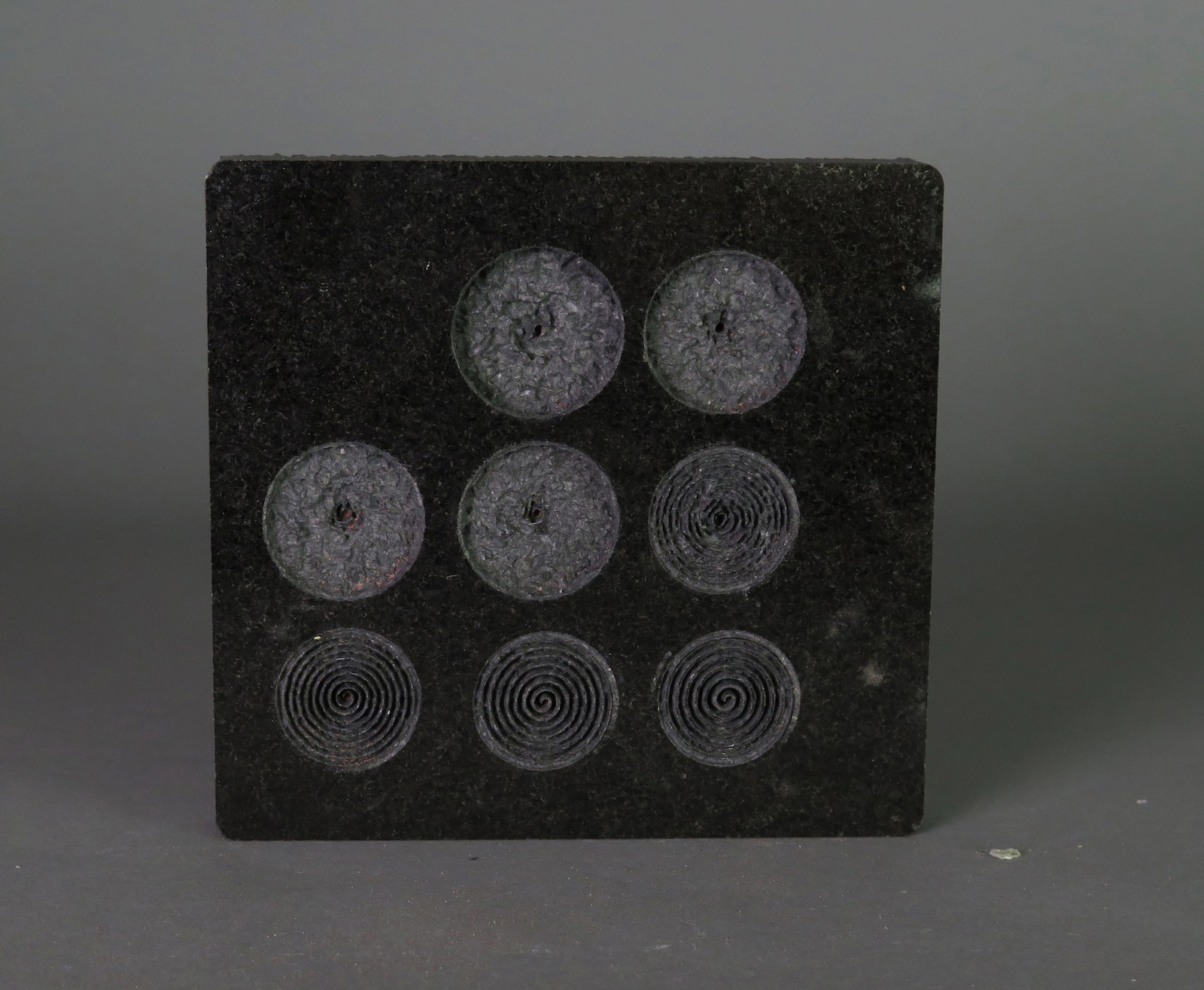 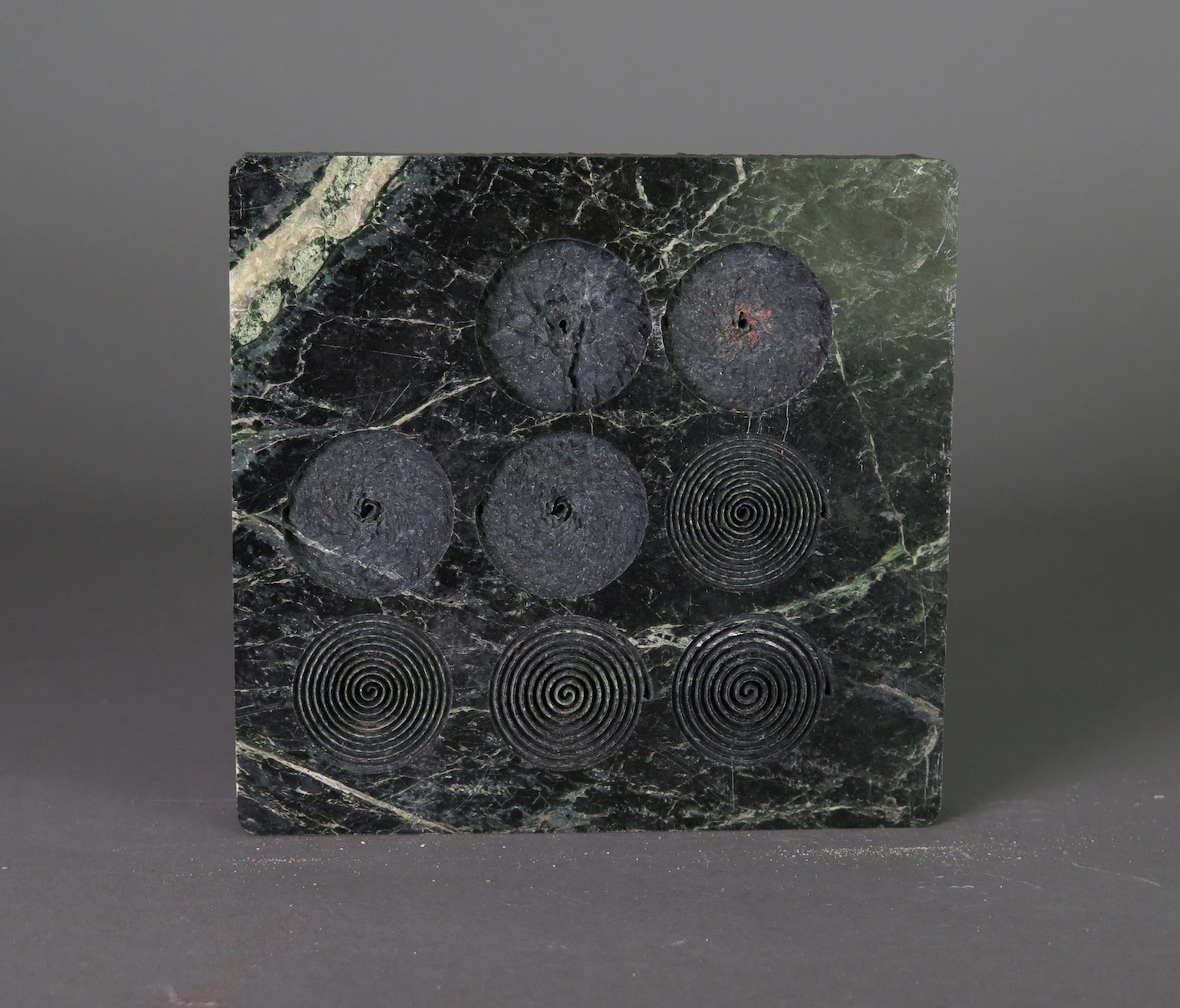 I’m not sure what stone this is, but like the marble, it’s a harder stone and doesn’t have much of an aesthetic appeal. The honed look makes it still feel like a countertop. 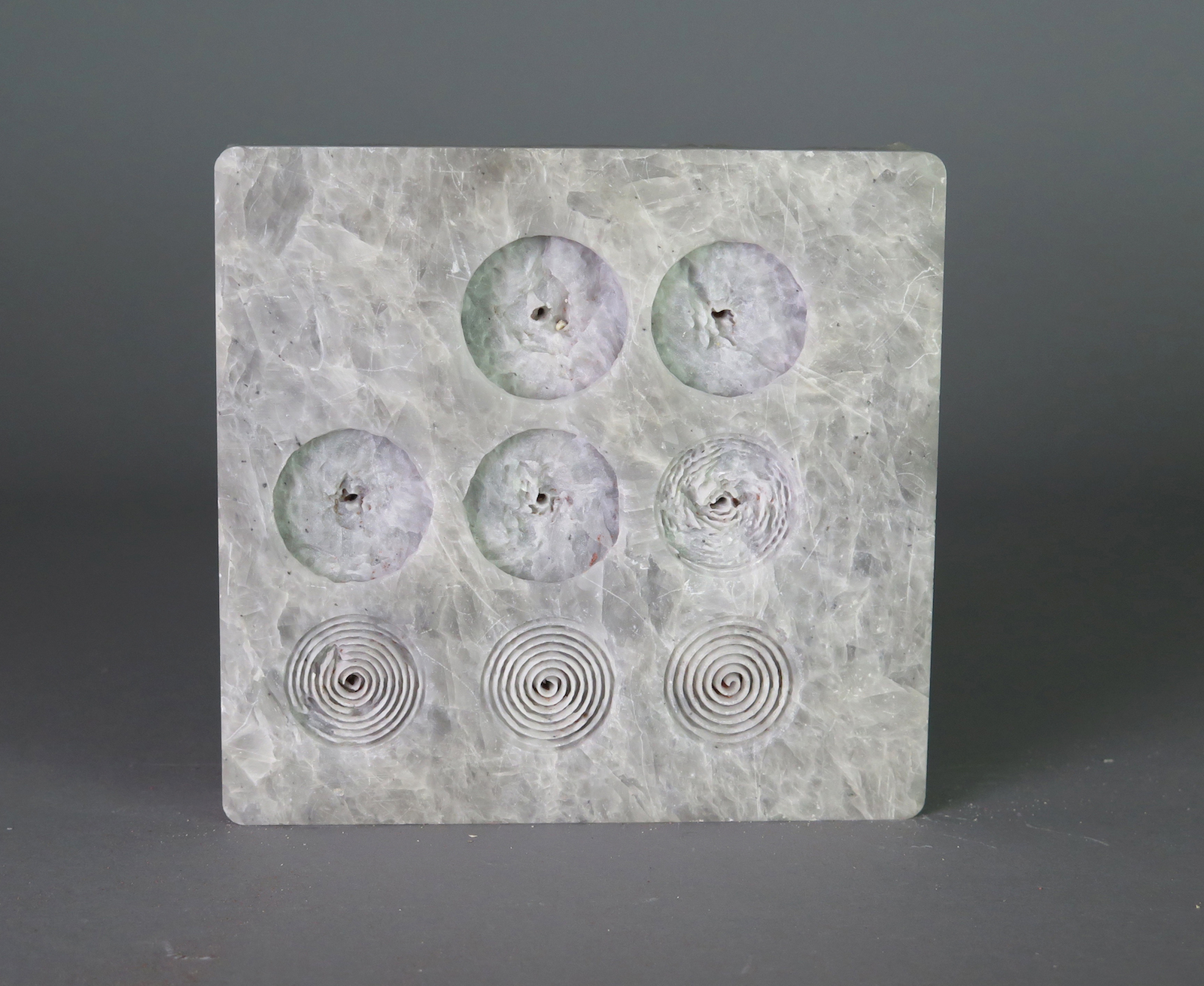 I quickly learned that thinner tile samples would be hard to dial in. Working with 1/4″ material like this, often results in blowing out the center. 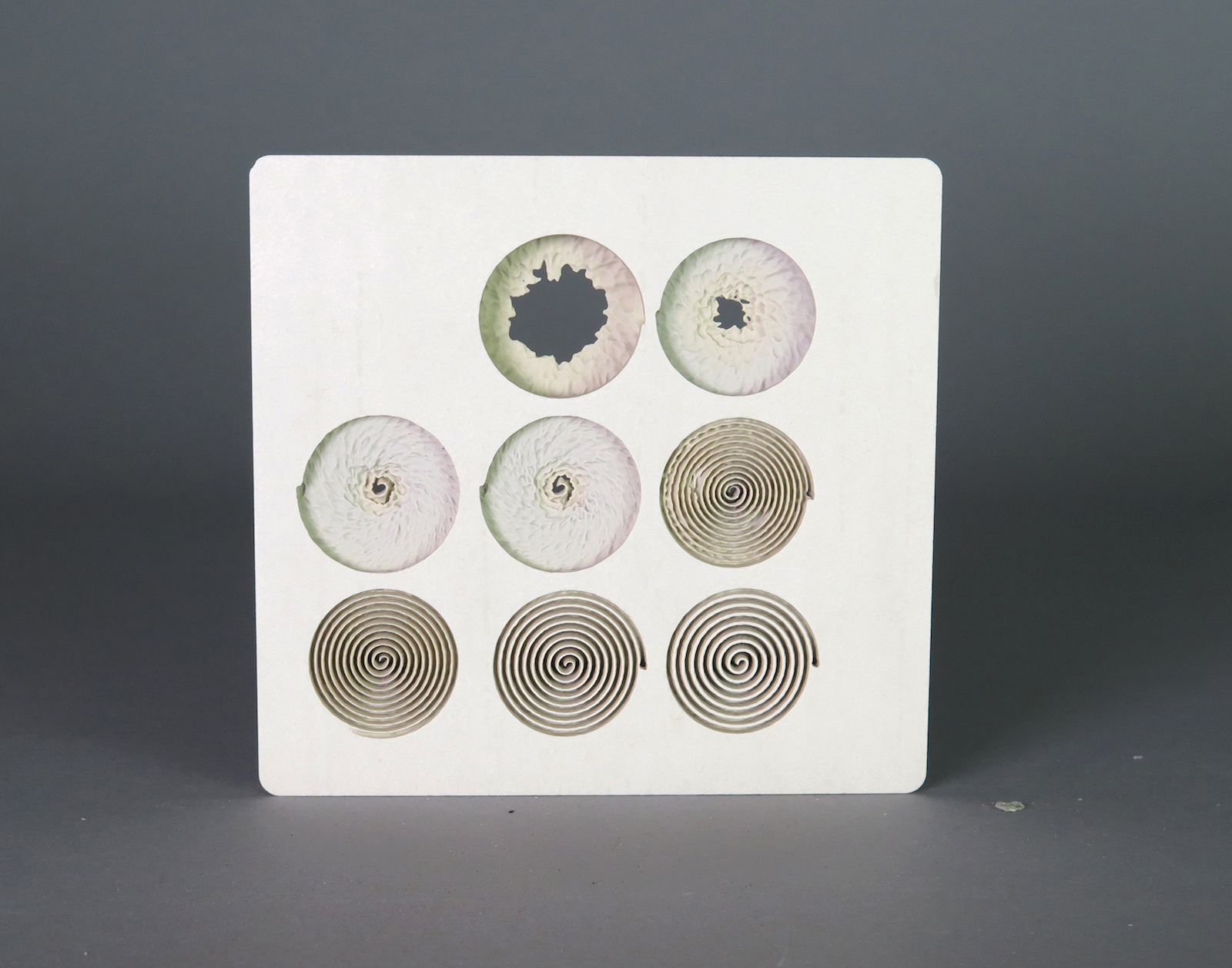 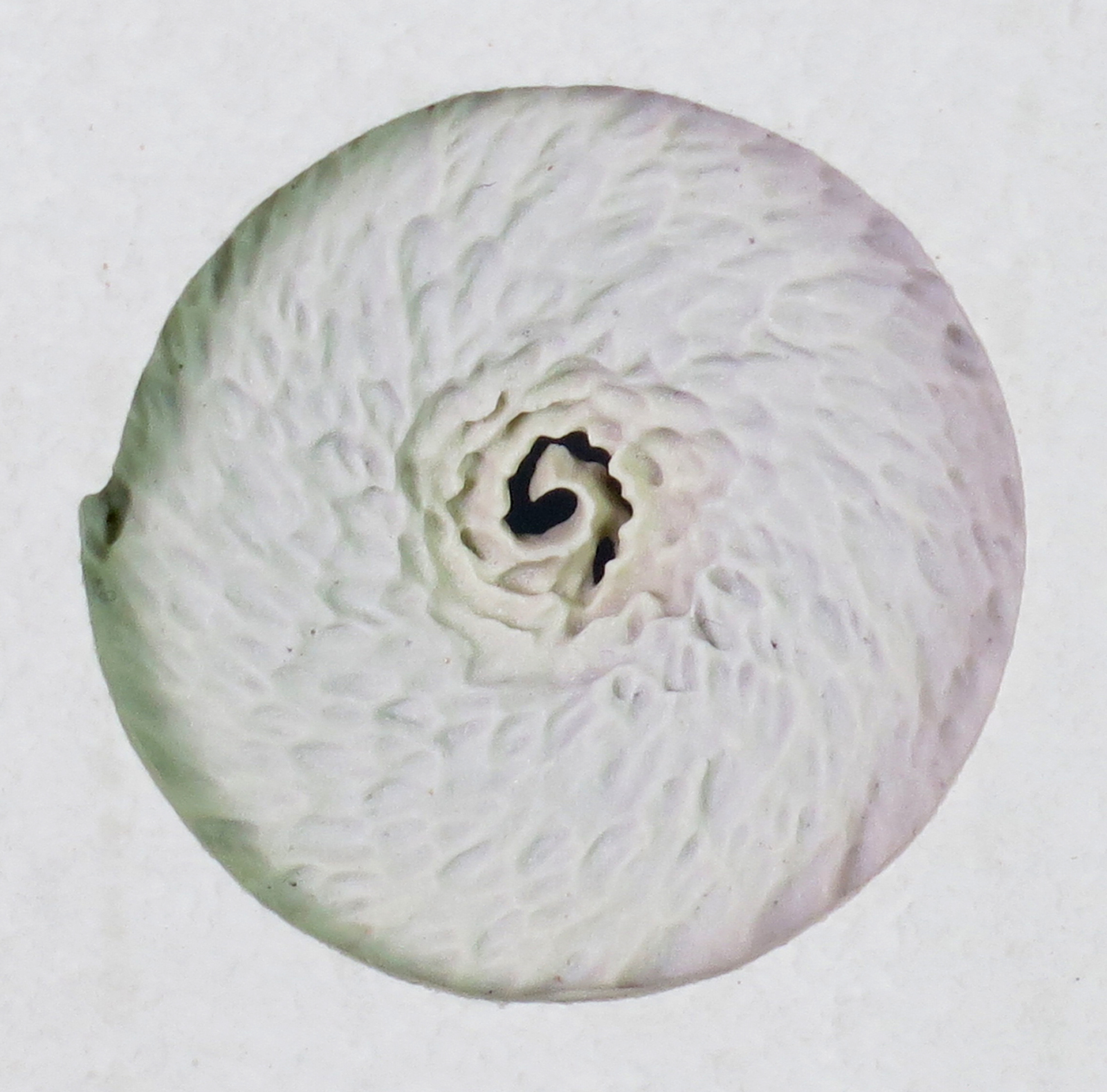 This engineered brick was one of my favorite results from this initial test. You can see the detail on the aggregate inside. 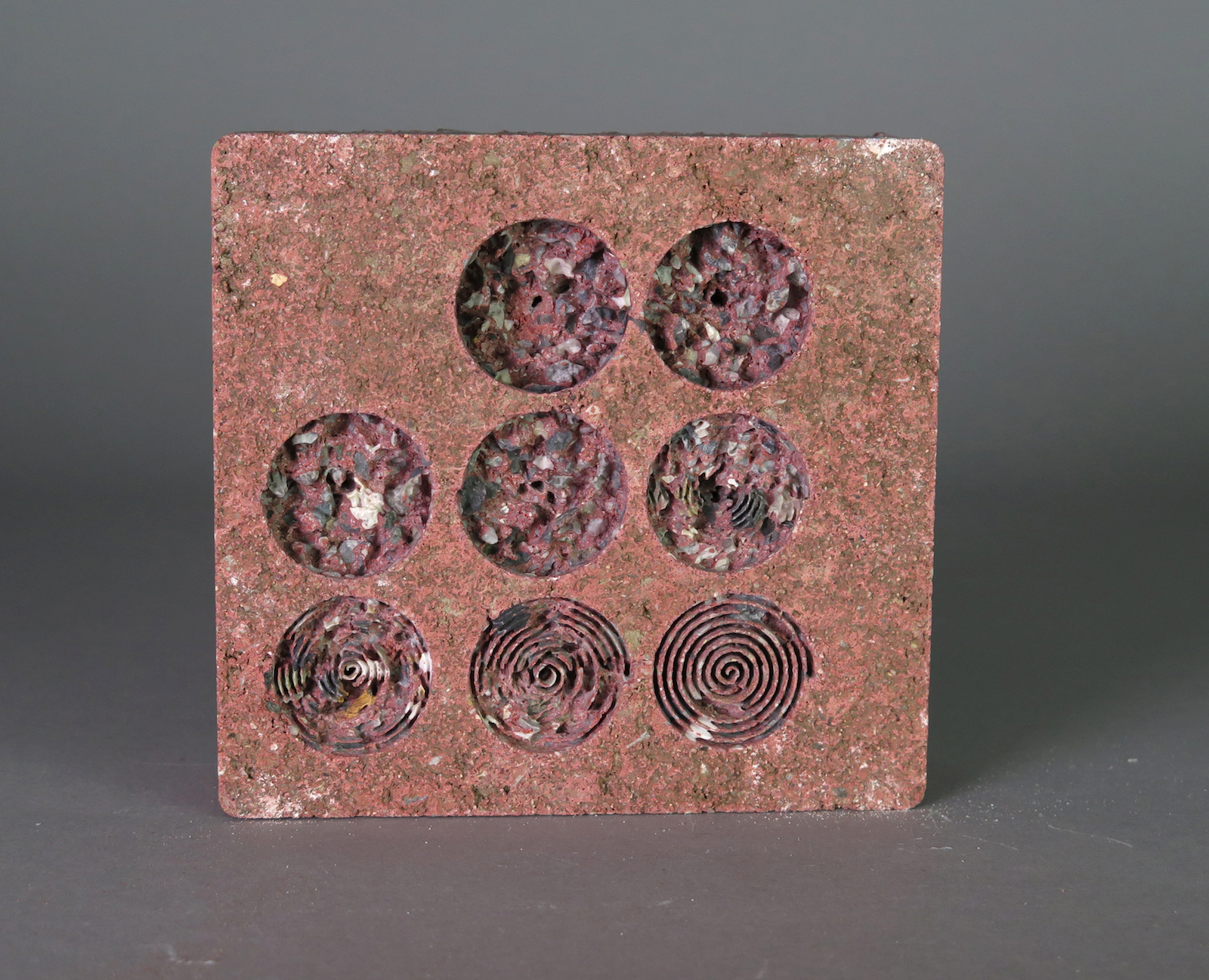 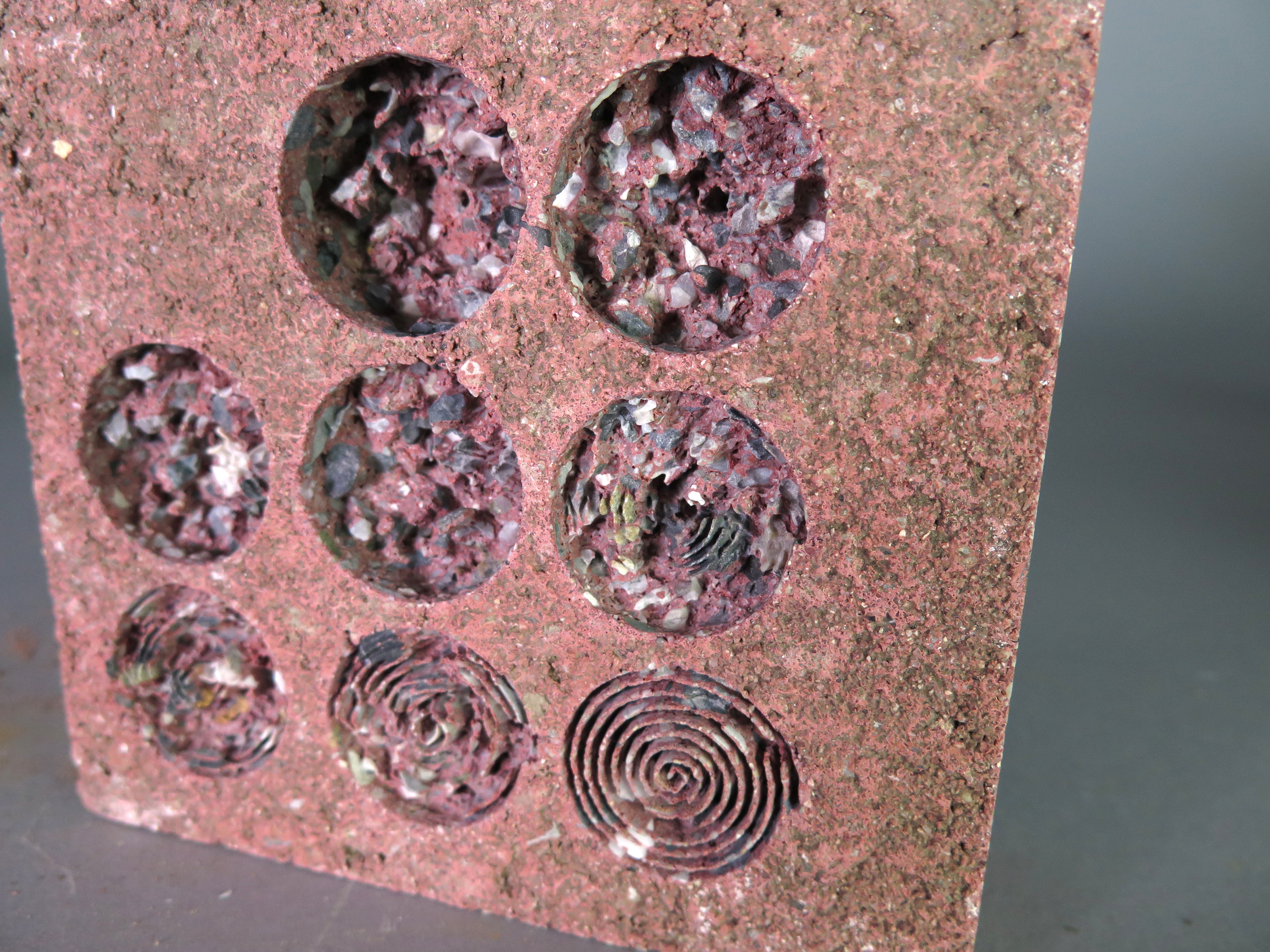 And I got some weird results. This material, whatever it is, is simple too delicate, kind of like a pumice. 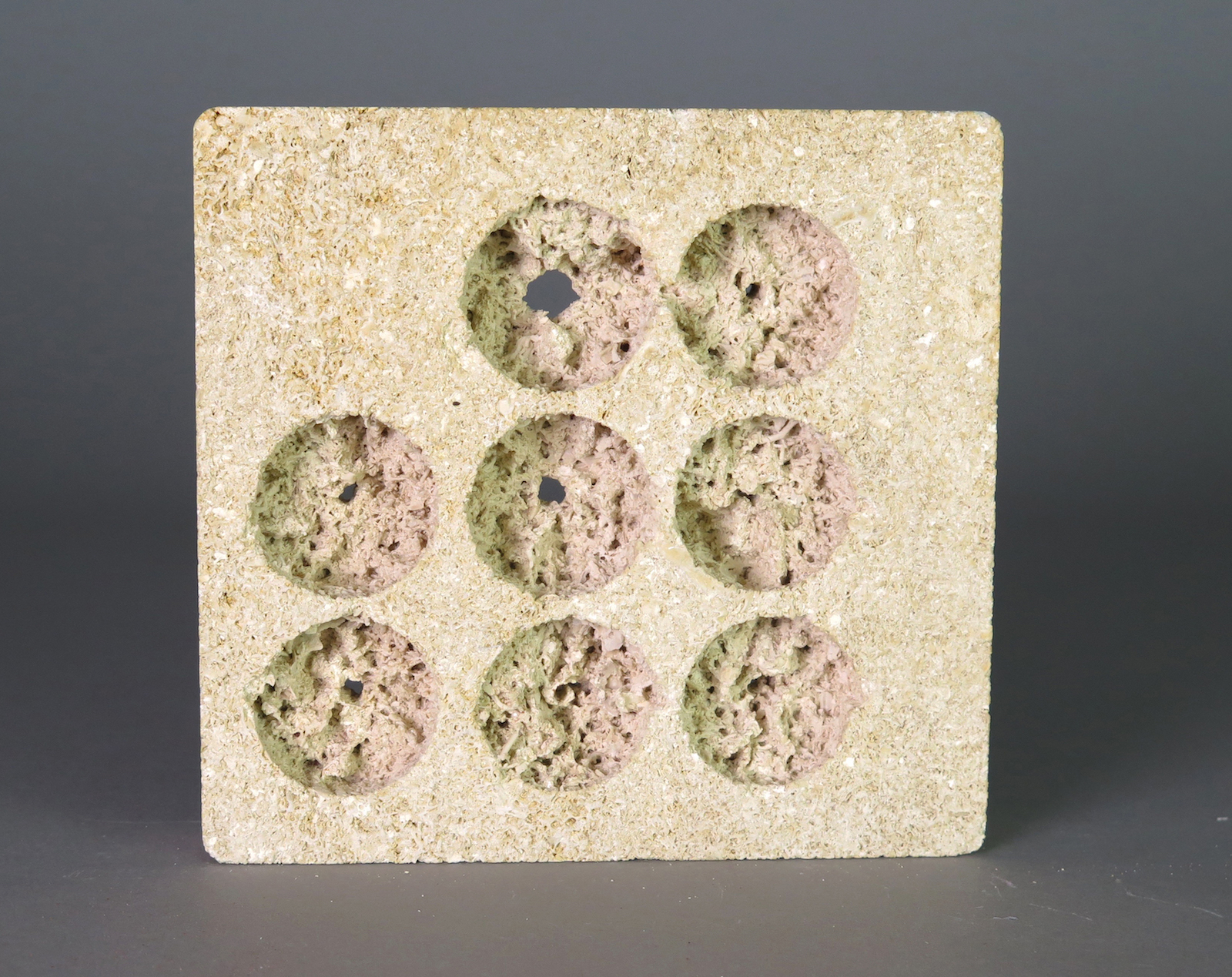 This is a cement compound of some flavor and for a day, I even thought about pouring my own forms, but that’s too much work, even for me. 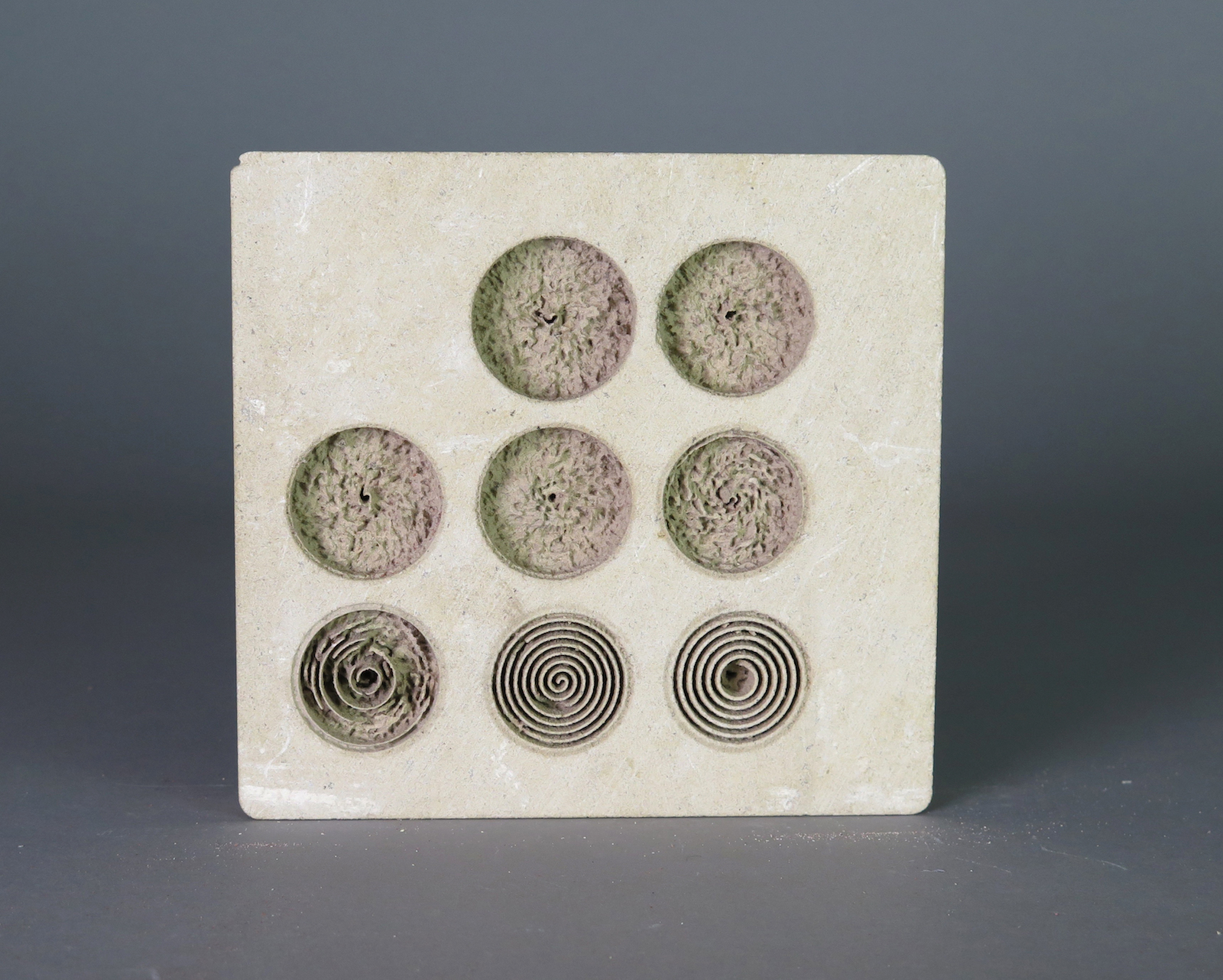 I think these two are travertine tile samples and I wish I had more information on them, but alas, that’s what you get when you are looking through the lot. These are in the not-too-hard and not-too-soft zone, just where I want them to be. 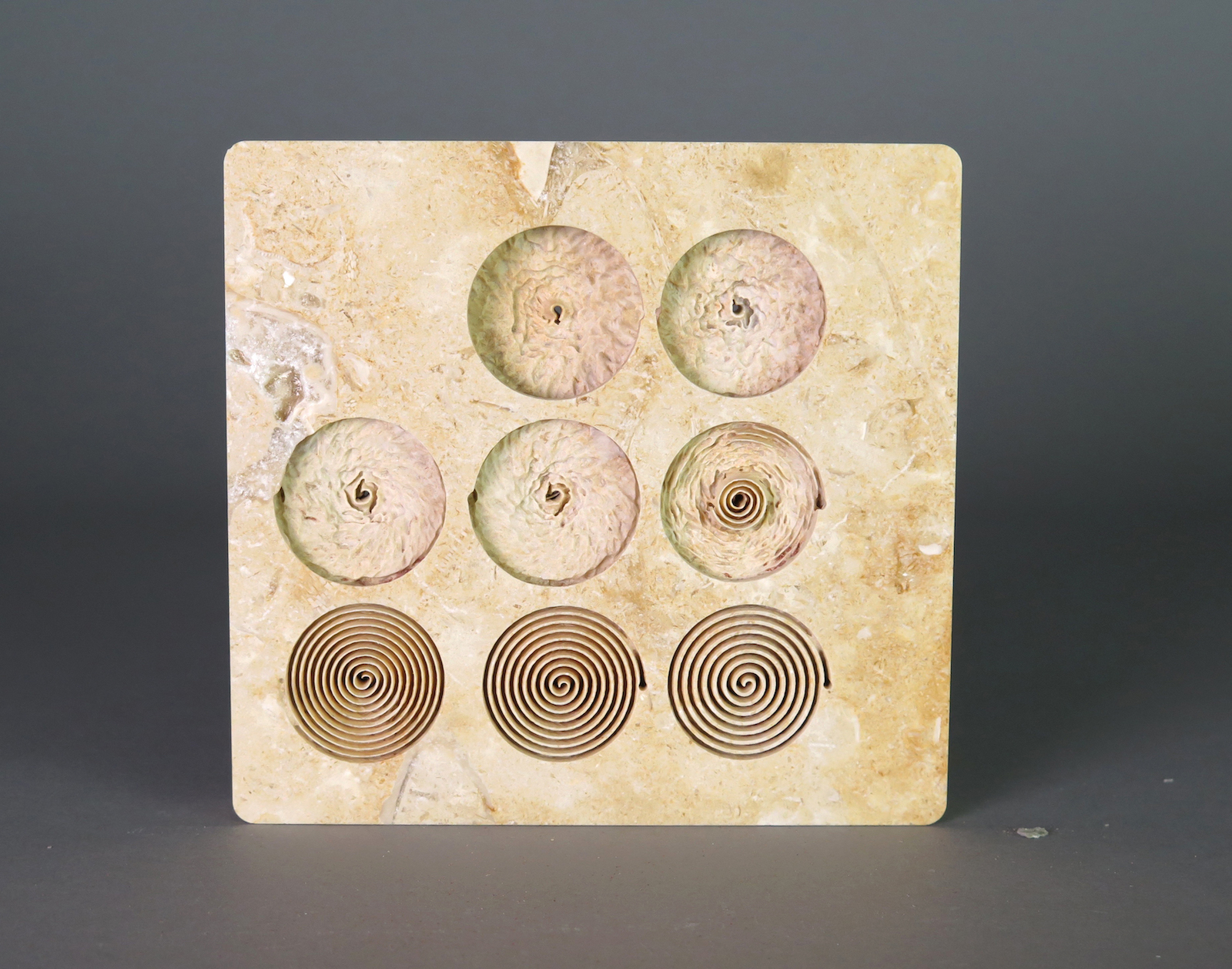 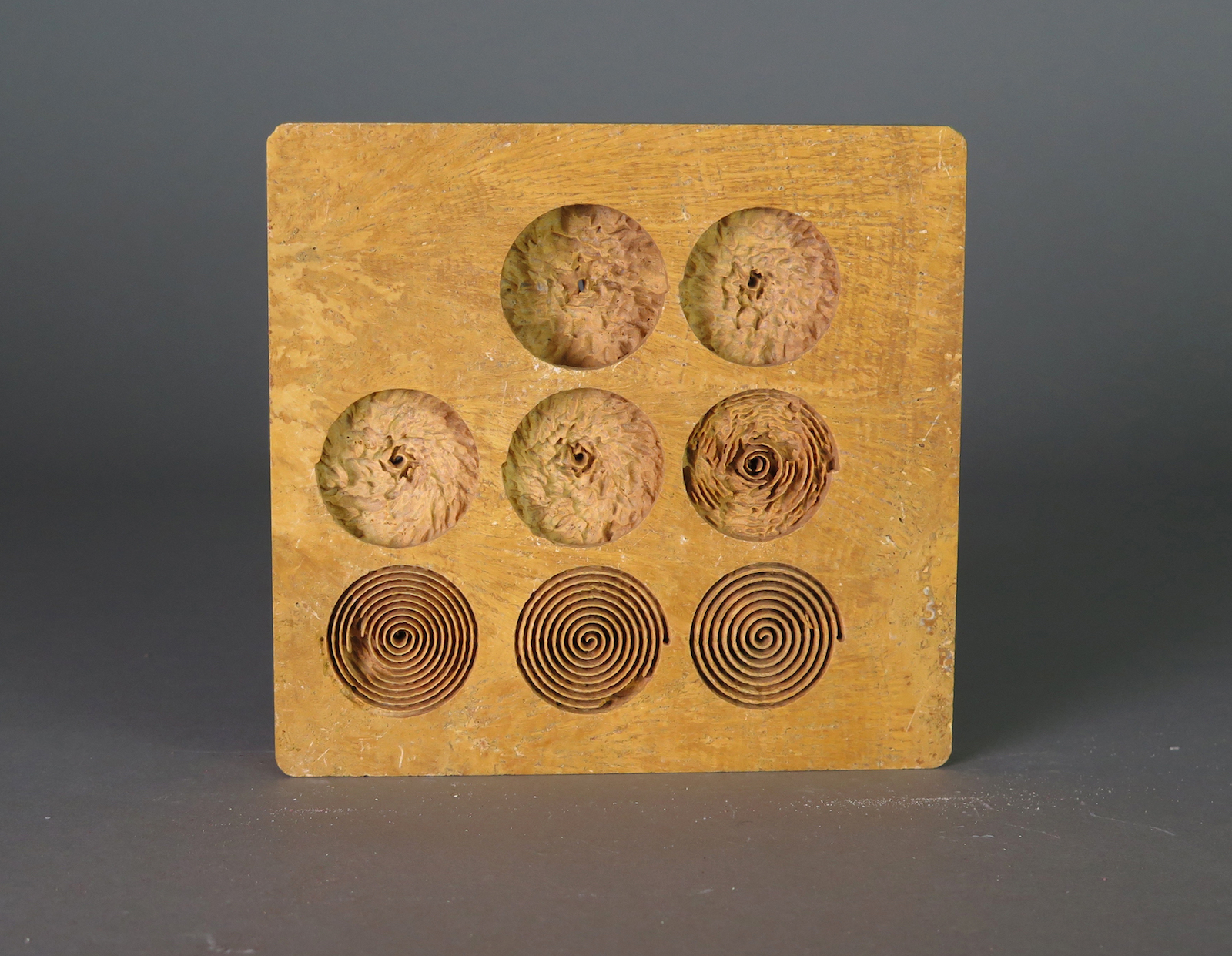 I followed up these tests by hitting up several stoneyards and tiling places along the Peninsula (south of San Francisco). This basalt-like material is one of my favorite results, but is probably too porous for accuracy. Still, the fissures that it opens up in the pockets is amazing. Perhaps if I could tame the waterjet further, this would work. 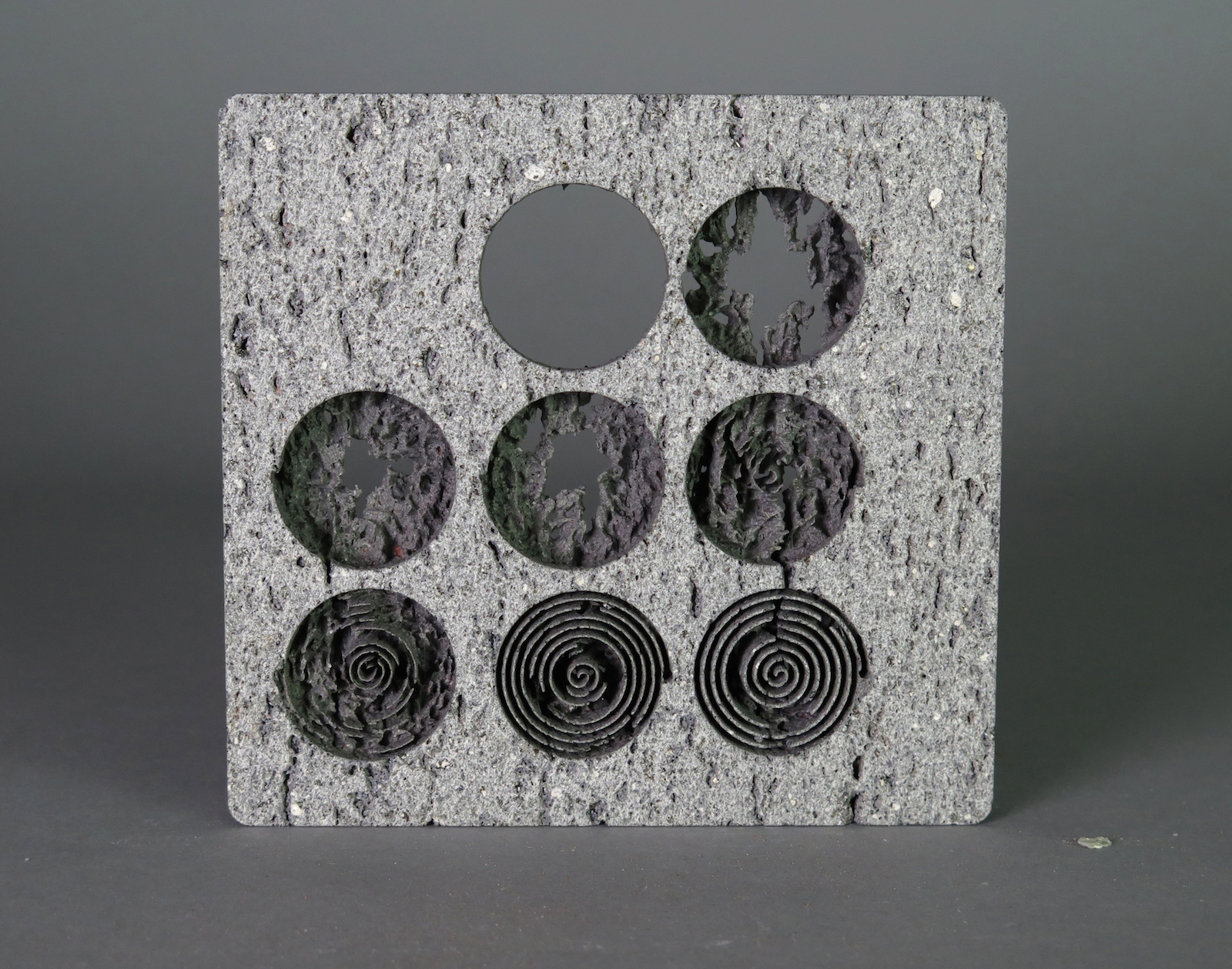 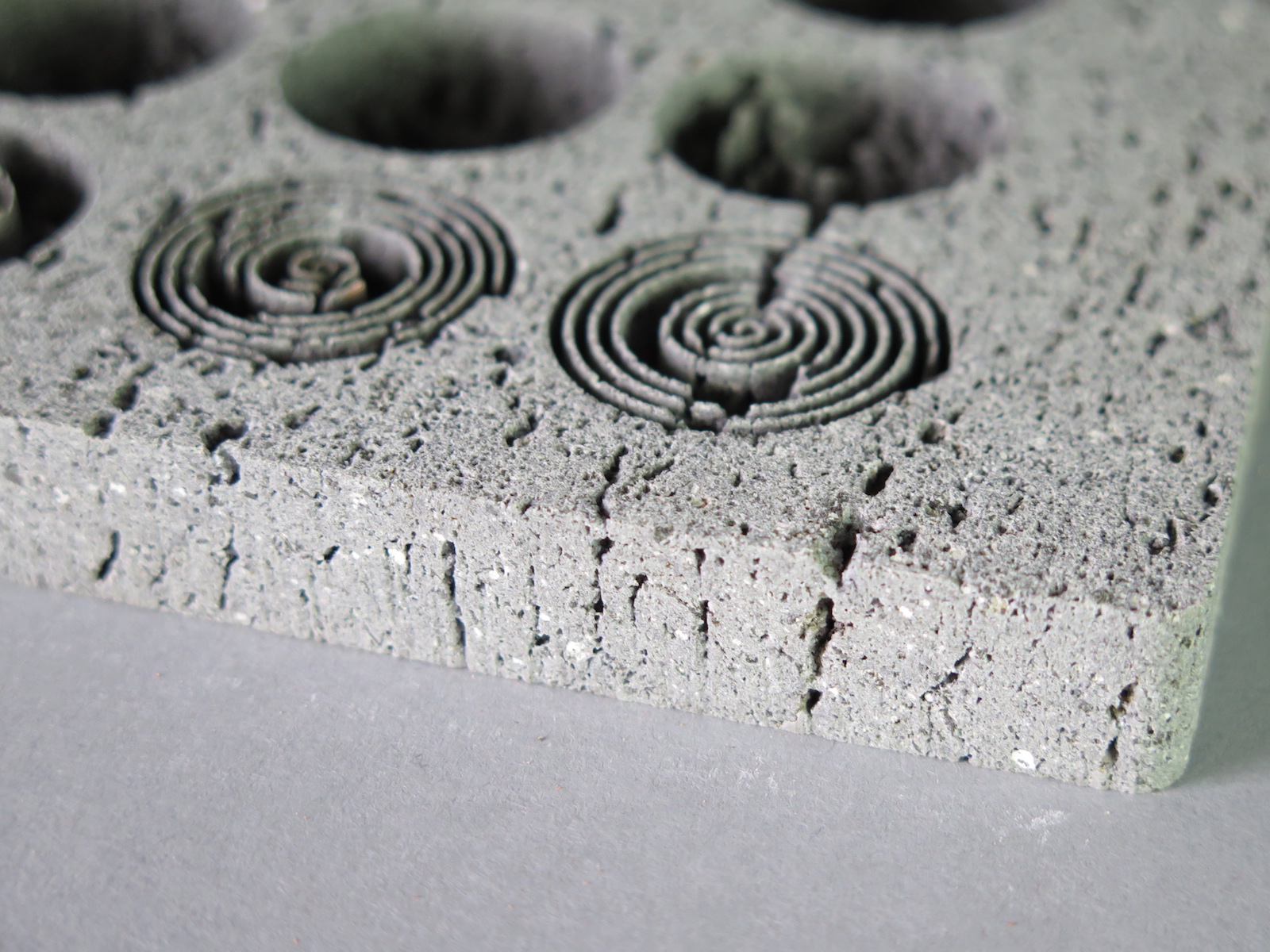 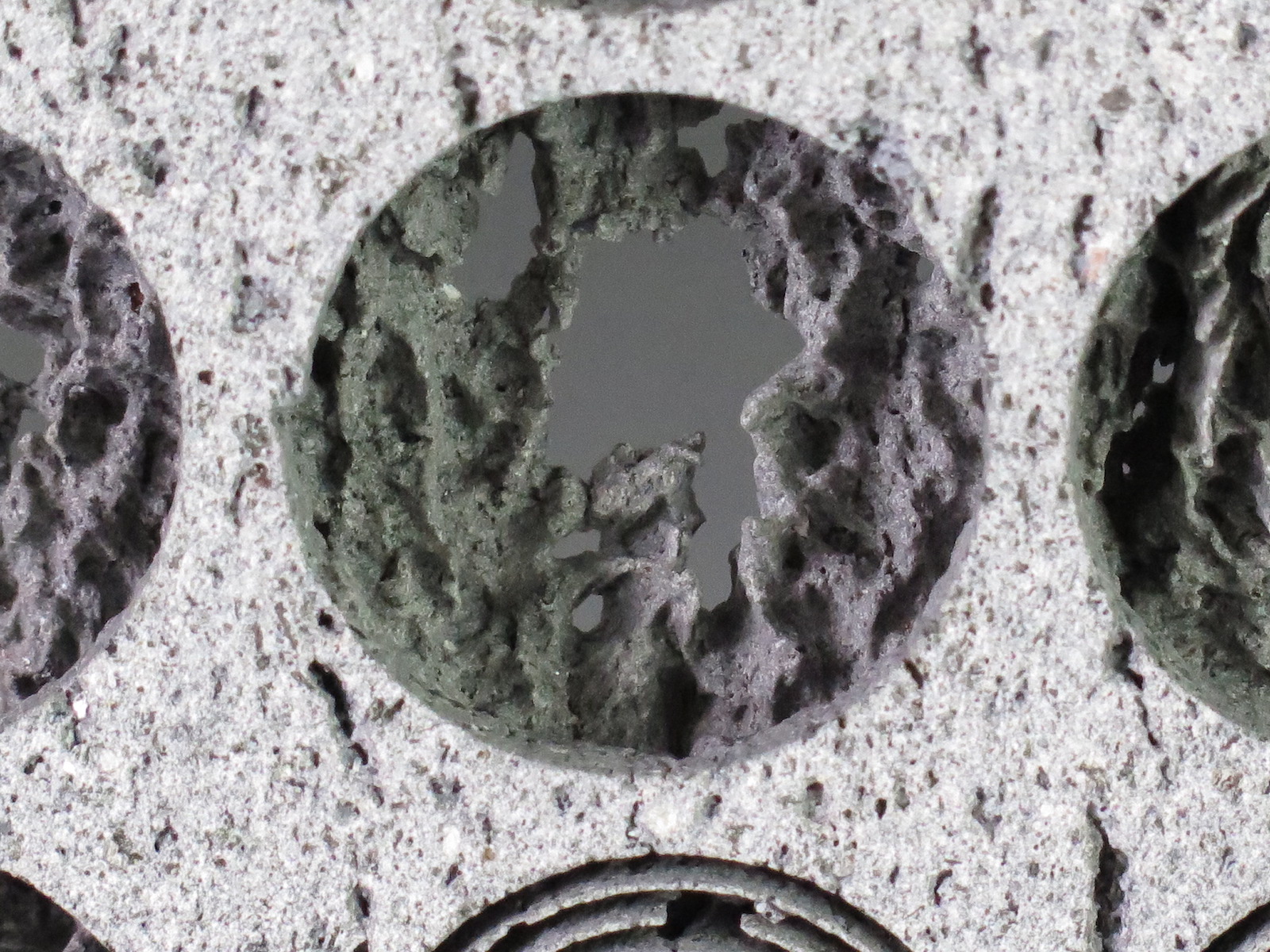 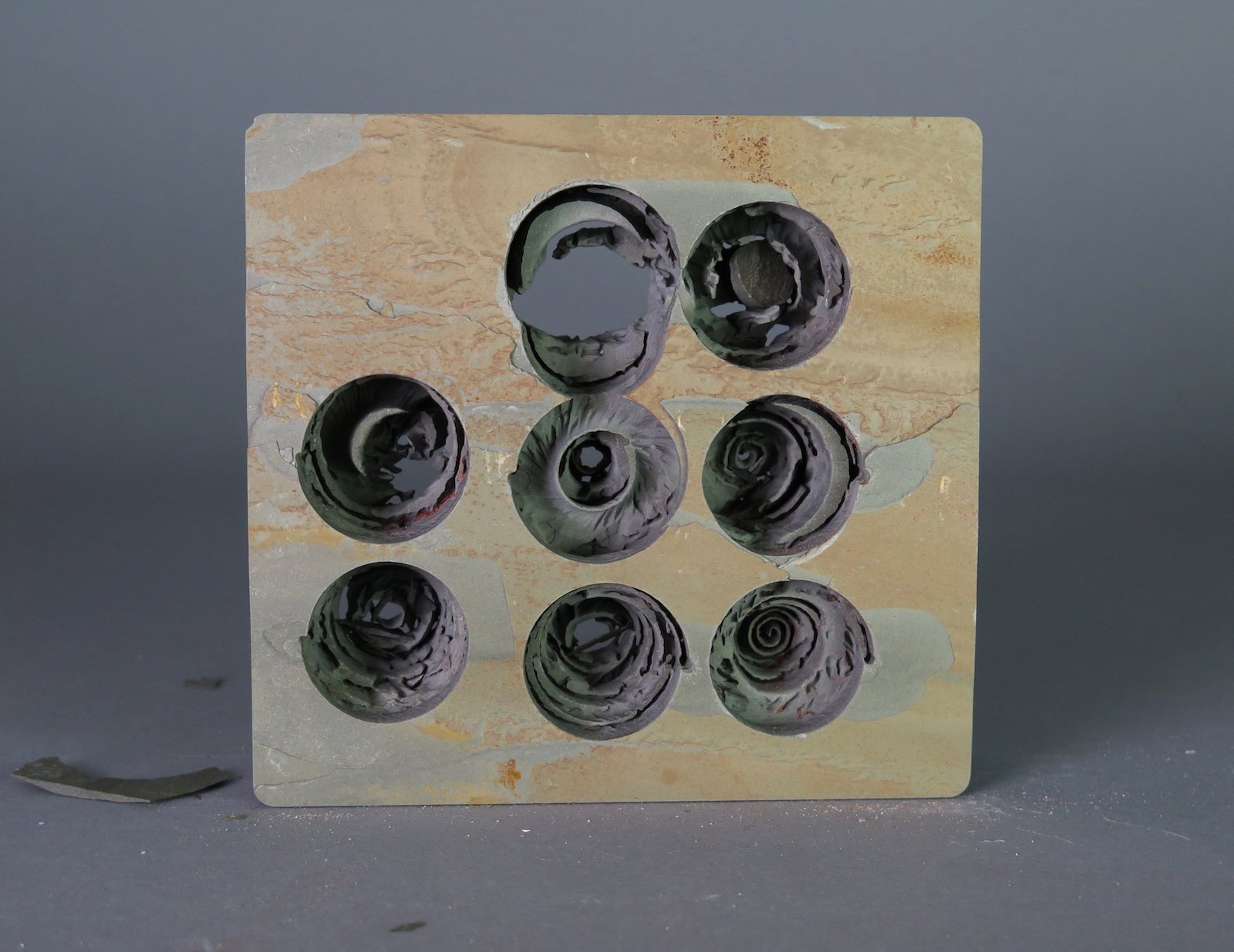 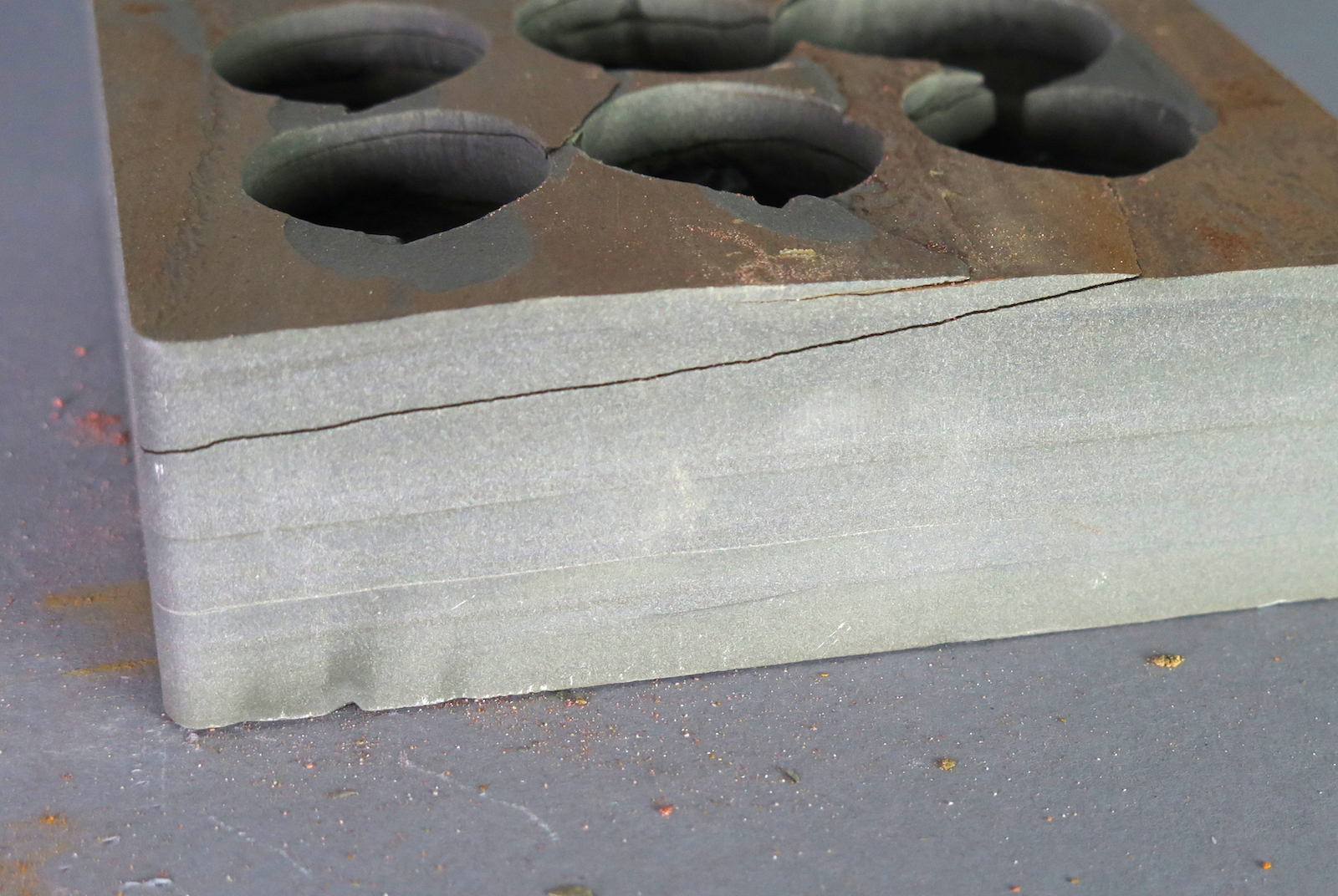 Likewise, this flagstone was a total fail. 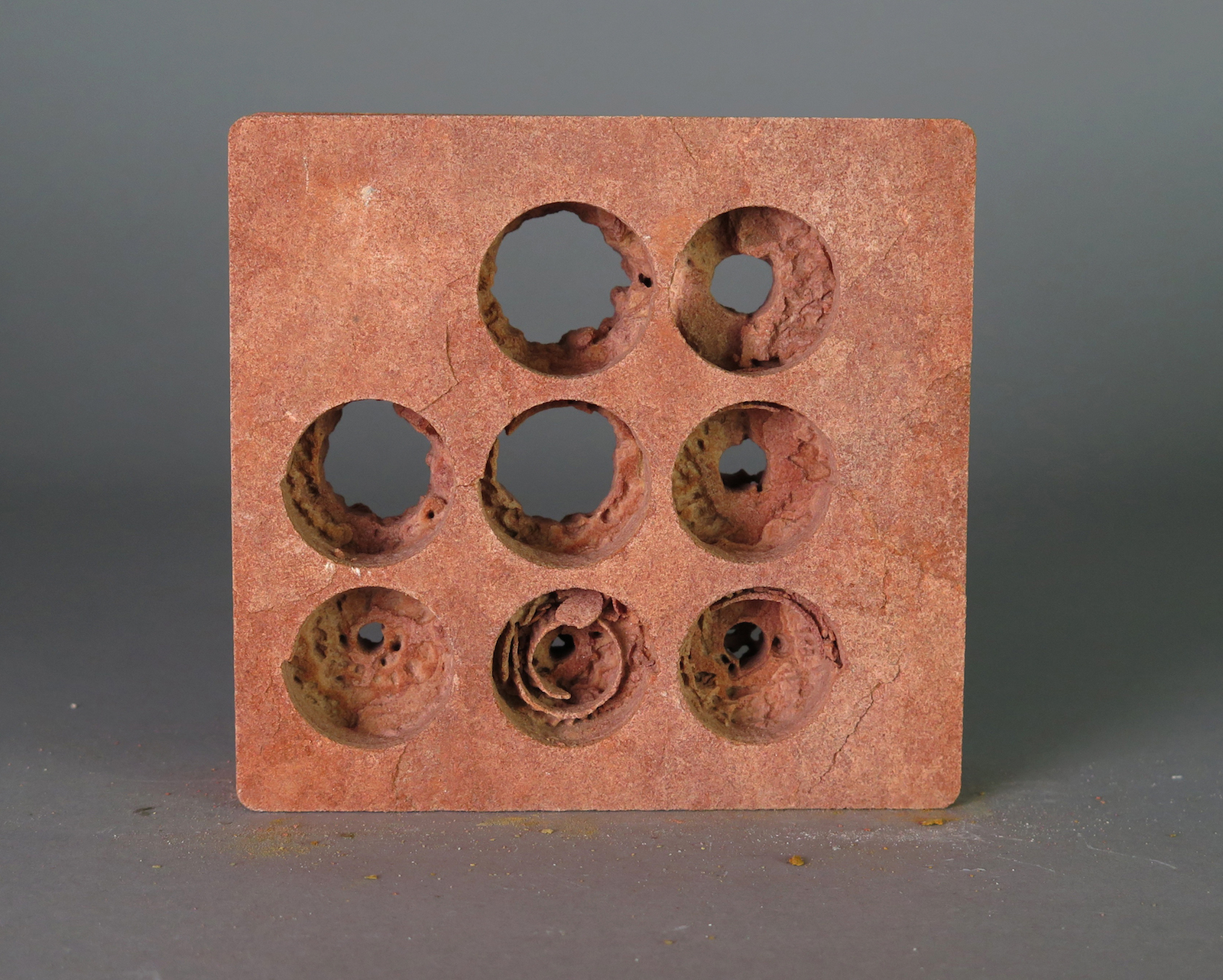 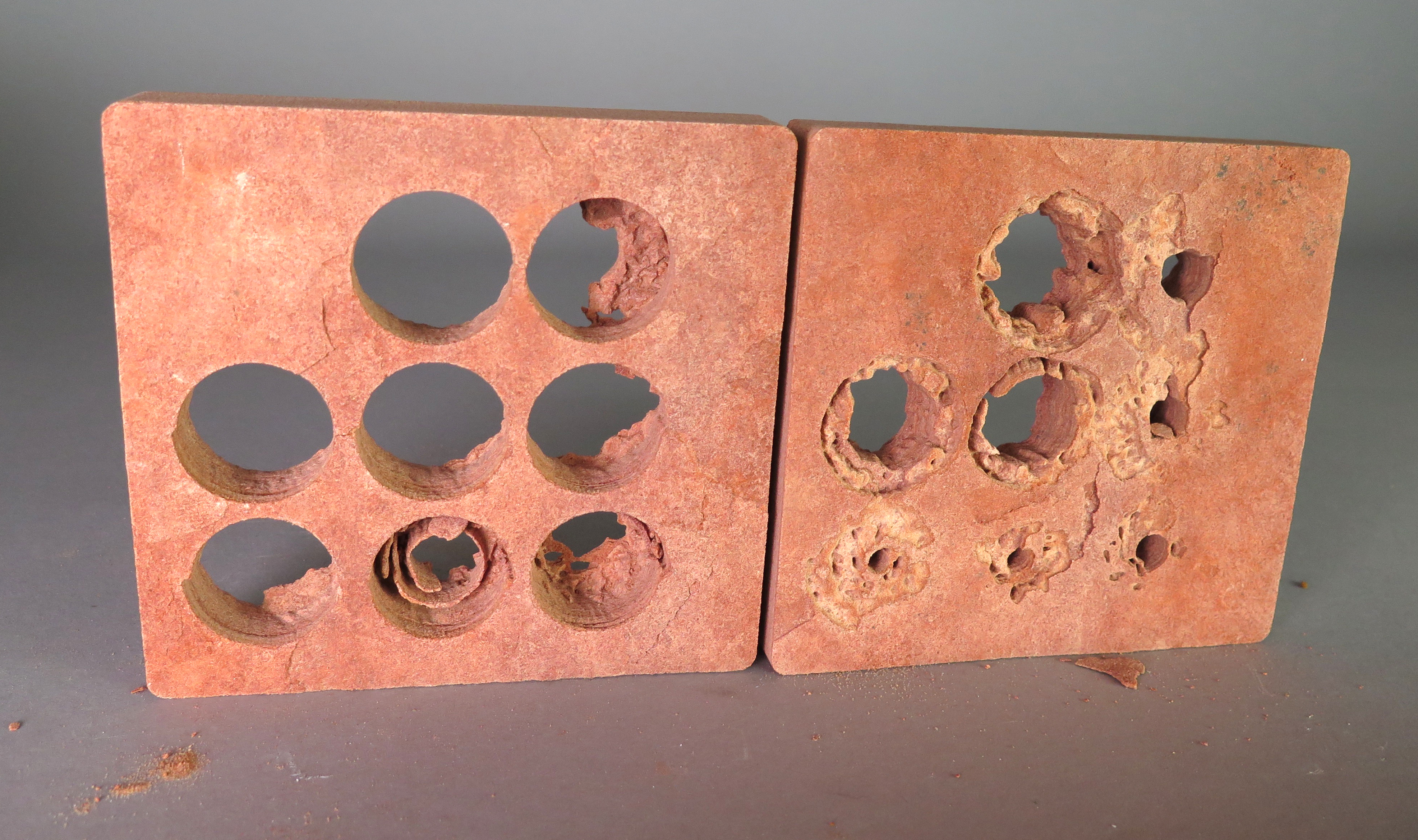 The non-honed quartzite gets very close to what I want, starting to look more like a data-etching. I just need to find one that isn’t so thick. This one will be too heavy to work with. 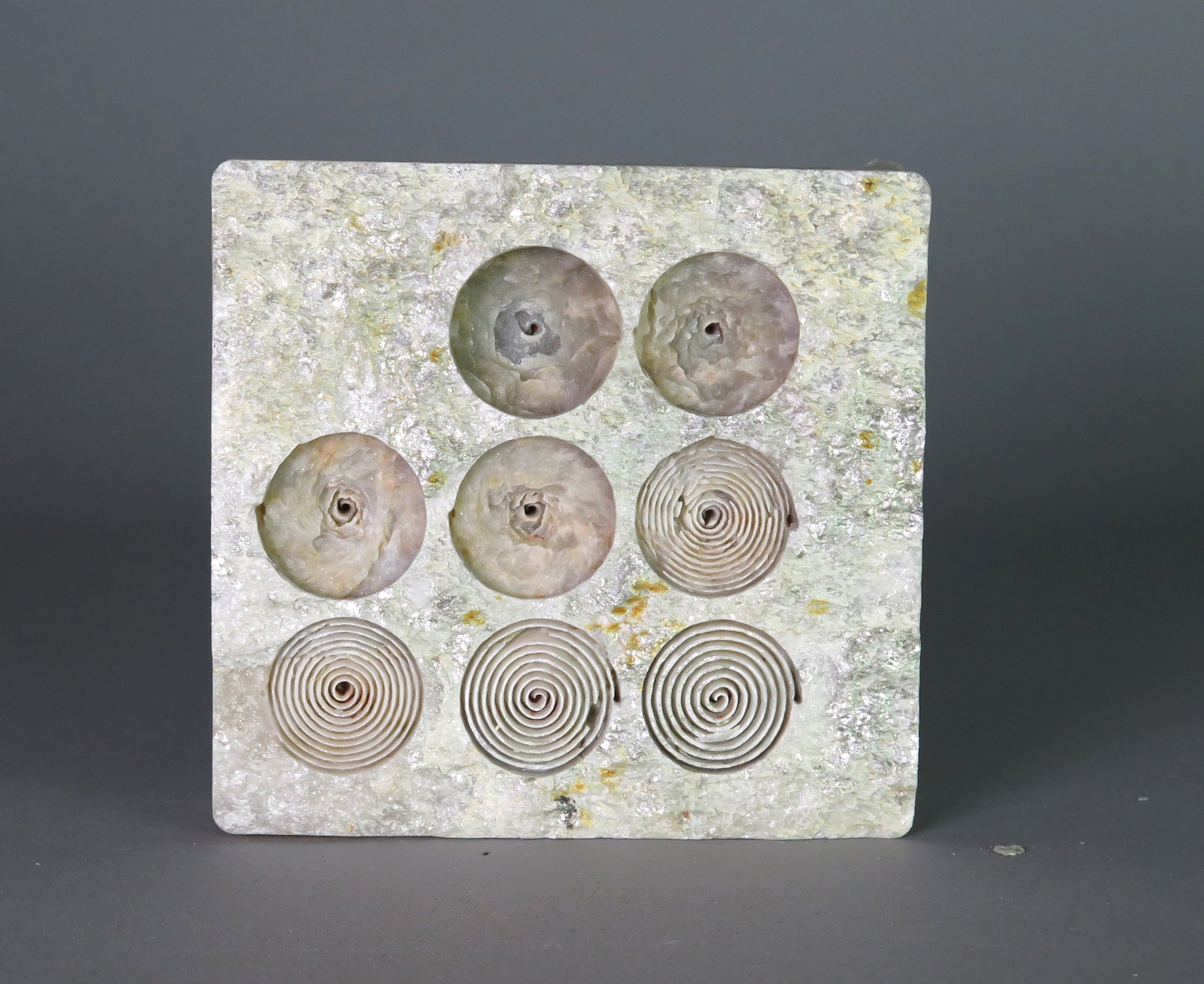 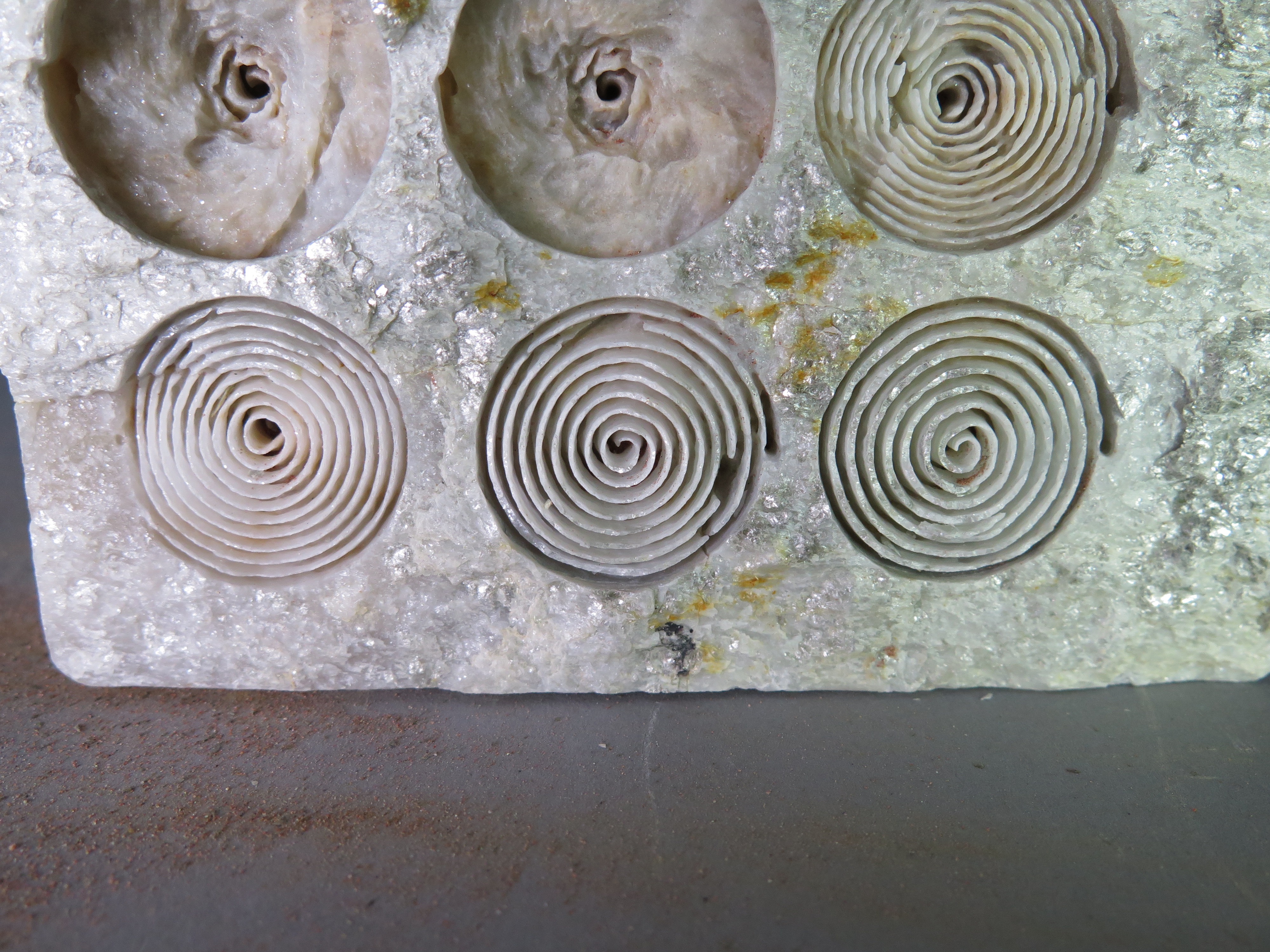 Although this color doesn’t do much for me, I do like the results of this limestone. 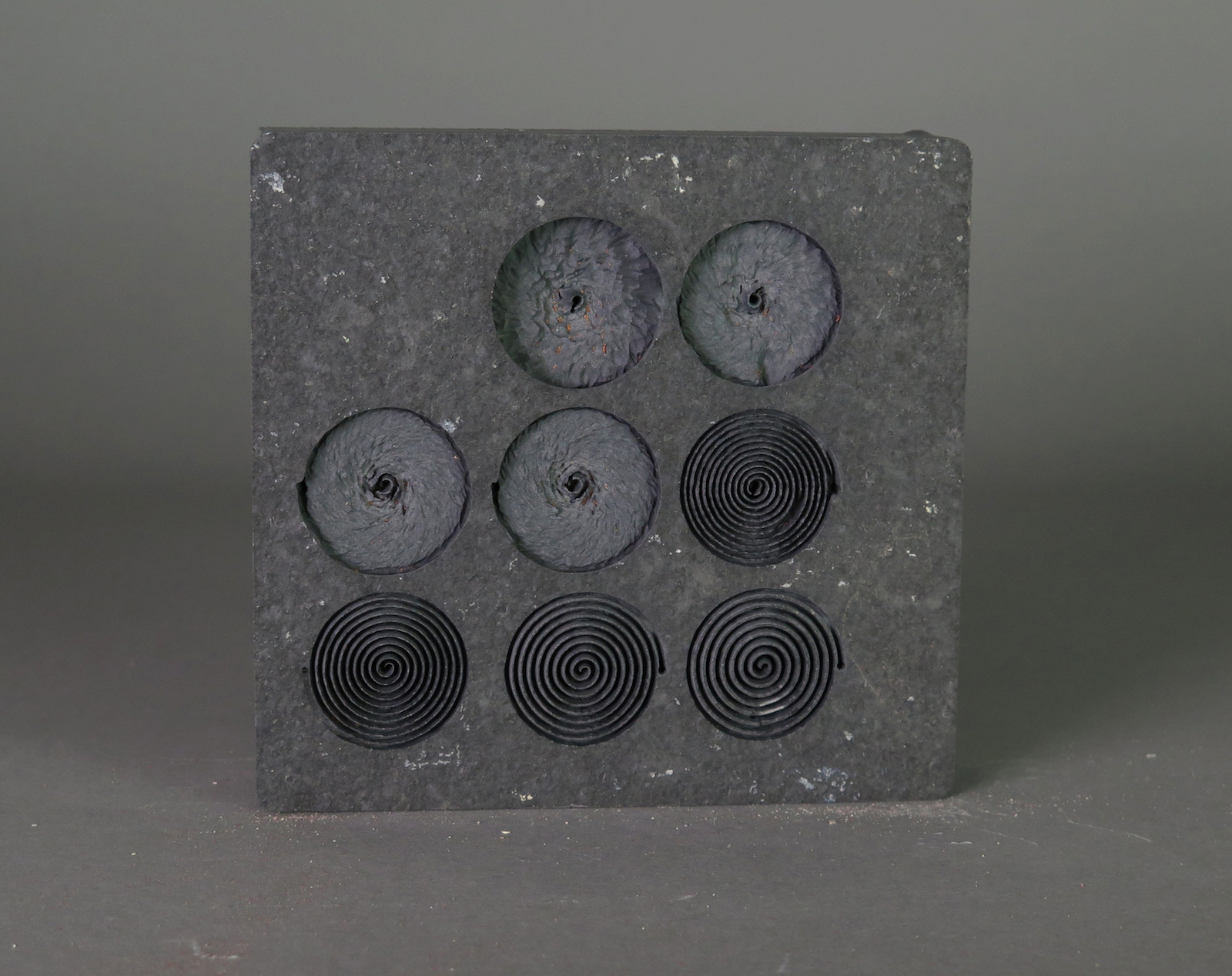 Here is a paver, that I got but can’t remember which kind it is. Better notes next time! Anyhow, it clearly is too weak for the water-jet. 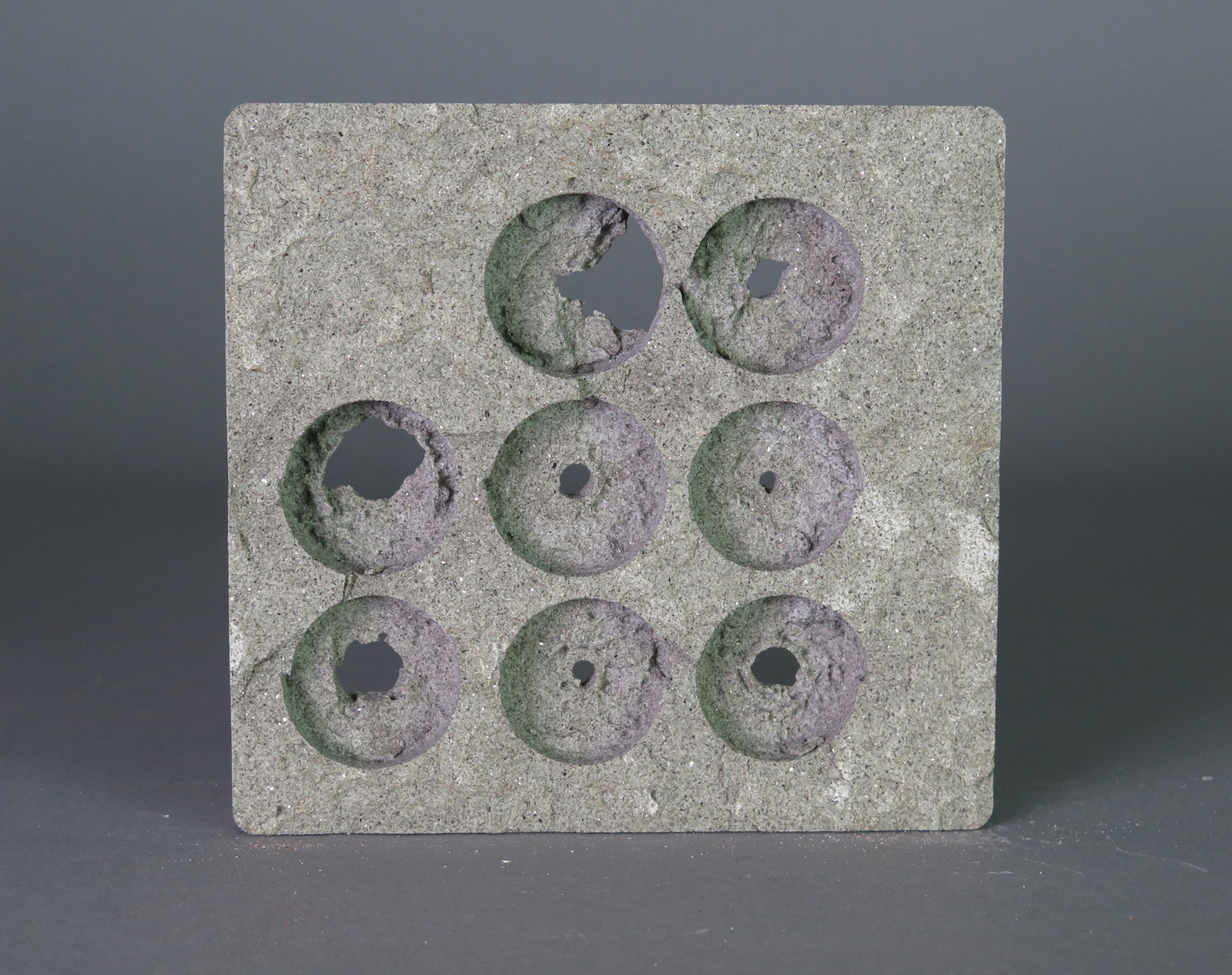 This is a slate. Nice results! 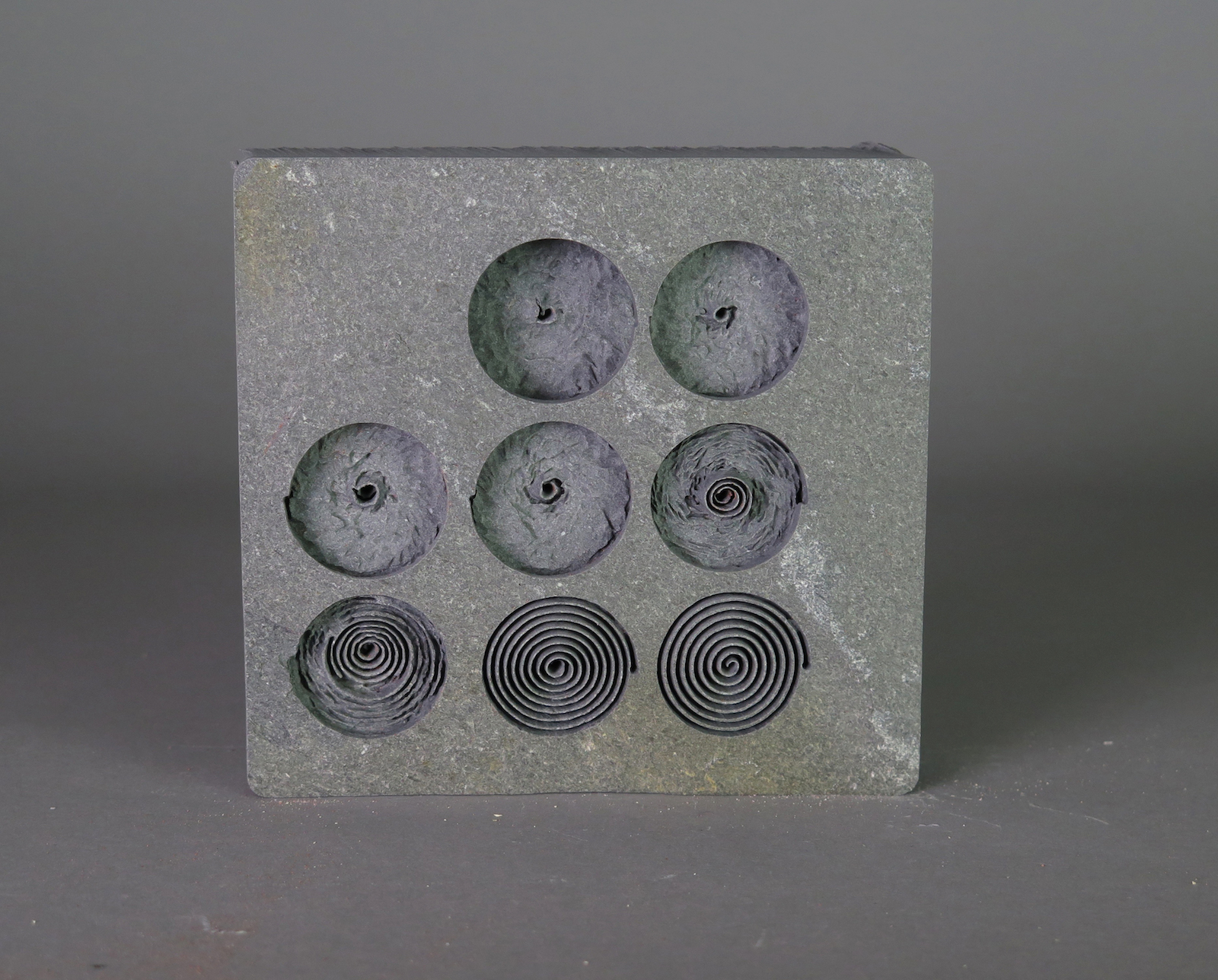 And a few more, with mixed results. 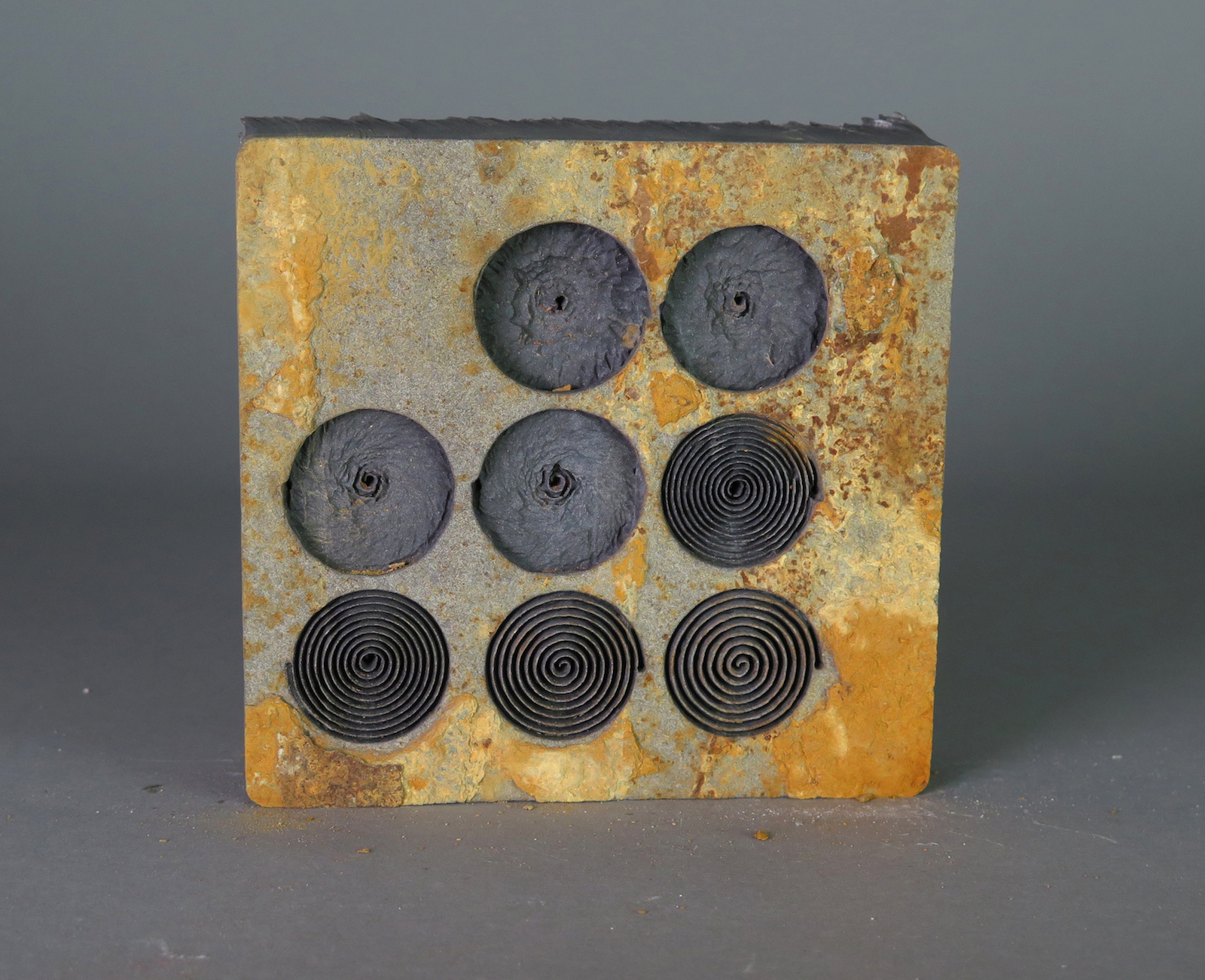 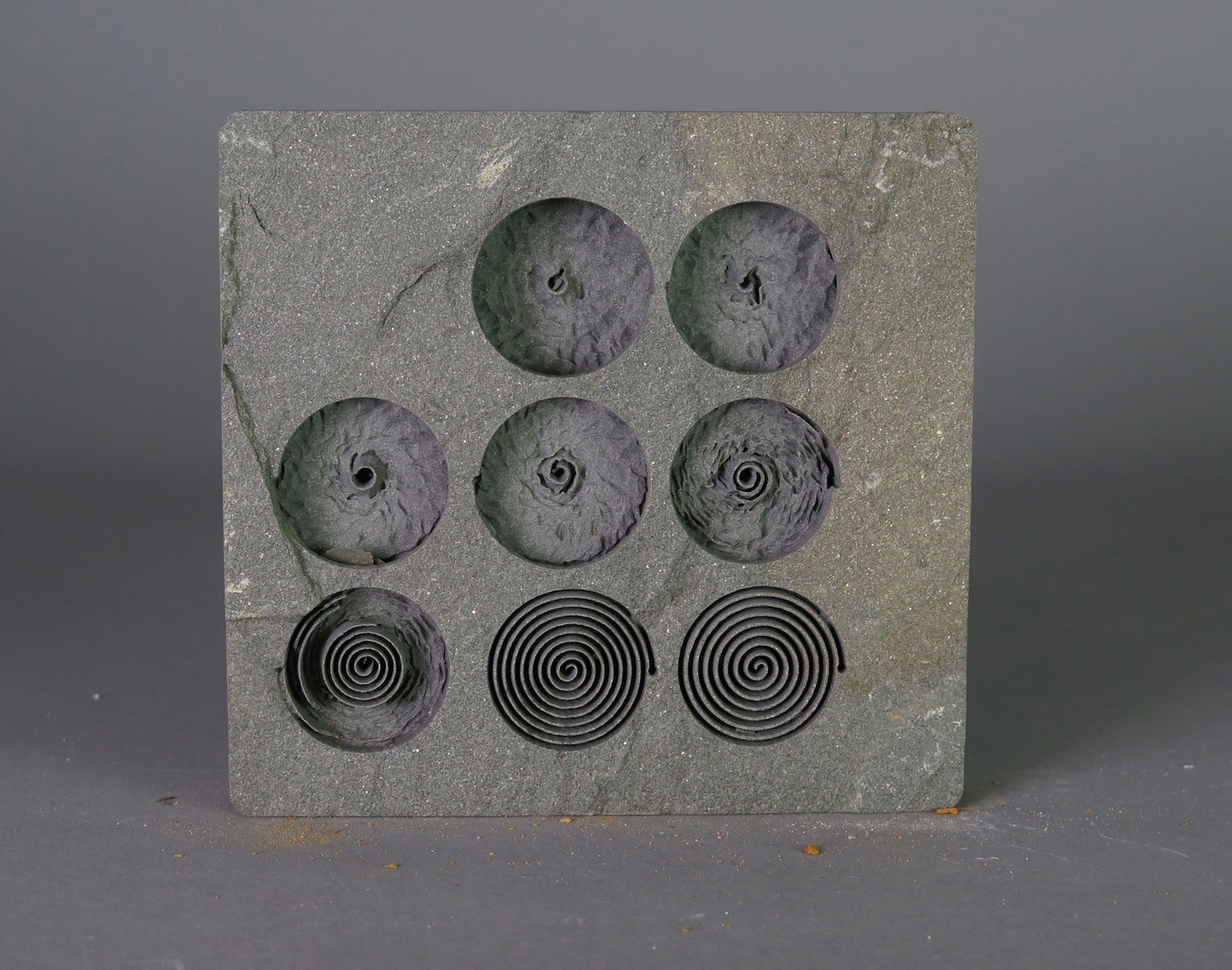 And if you are a geologist and have some corrections or additions, feel free to contact me.