I spent my time at the five-day long Impakt Festival watching screenings, listening to talks, interacting with artworks and making plenty of connections with both new and old friends. I’m still digesting the deluge of aesthetic approaches, subjective responses and formal interpretations of the theme of the festival, “Soft Machines: Where the Optimized Human Meets Artificial Empathy”. 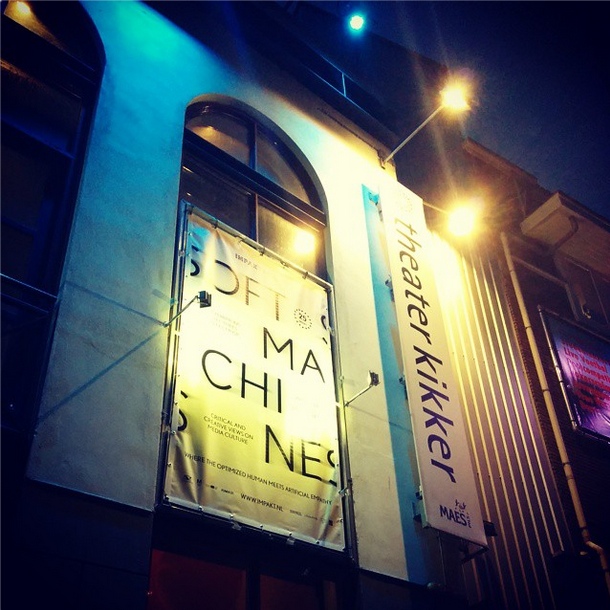 It’s impossible to summarize everything I’ve seen. While there were a few duds, like any festival, the majority of what I experienced was high-caliber work. Topping my “best of list” was the “Algorithmic Theater” talk by Annie Dorsen, the Omer Fast film, “5000 Feet is the Best”, the Hohokum video game by Richard Hogg and a captivating talk on the Human Brain Project. 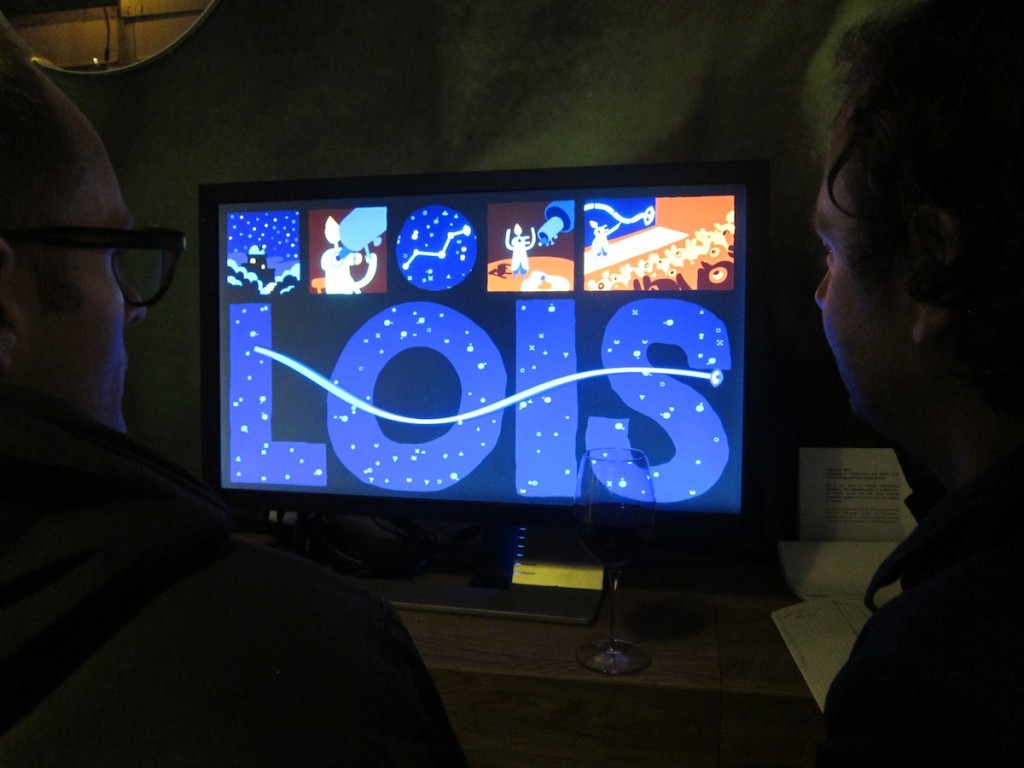 For the sake of brevity, I’m going to cover just the presentation on the Human Brain Project (HBP). Even though this is a science project, what impressed me was similarities in methodology to many art projects. HBP has simple directive: to map the human brain. However the process is highly experimental and the results are uncertain.

HBP is largely EU-funded and was awarded to a consortium of researchers from a competition with 26 different organizations. The total funding over the course of the 10-year project is about 1 billion Euros, which is a hefty price tag for a research project. The eventual goal, likely well-after the 10 year period will be to actualize a simulated human brain on a computer — an impossibly ambitious project given the state of technology in 2014.

I arrived skeptical, well-aware that technology projects often make empty promises when predicting the future. Marc-Oliver Gewaltig, who is one of the scientists on HBP presented the analogy of 15th-century mapmaking. In 1492, Martin Behaim collected as many known maps of the world as he could, then produced the Erdapfel, a map of the known world at the time. He knew that the work was incomplete. There were plenty of known places but also many uncertain geographical areas as well. The Erdapfel didn’t even include any of the Americas since it was created before the return of Columbus from his first voyage. But, the impressive part was that the Erdapfel was a paradigm shift, which synthesized all geographical knowledge into a single system. This map would then be a stepping stone for future maps. 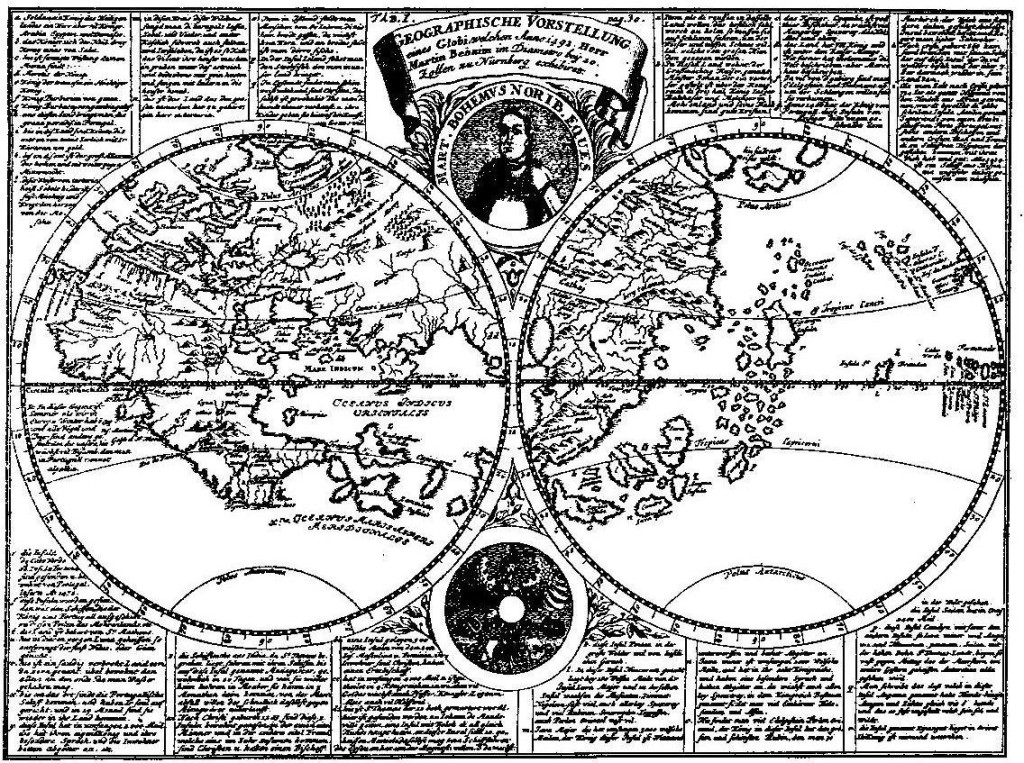 According to Gewaltig, the mission of the HBP will follow a similar trajectory and aggregate known brain research into a unified, but flawed model. He fully recognizes that the directive of the project, a fully working synthetic human brain is impossible at this point. The computing power isn’t available yet, nor will it likely be there in 10 years.

The human brain is filled with neurons and synapses. The interconnections are everywhere with very little empty space in a brain. Because of this complexity, the HBP project is beginning by trying to simulate a mouse brain, which is within technology’s grasp in the next 10 years. 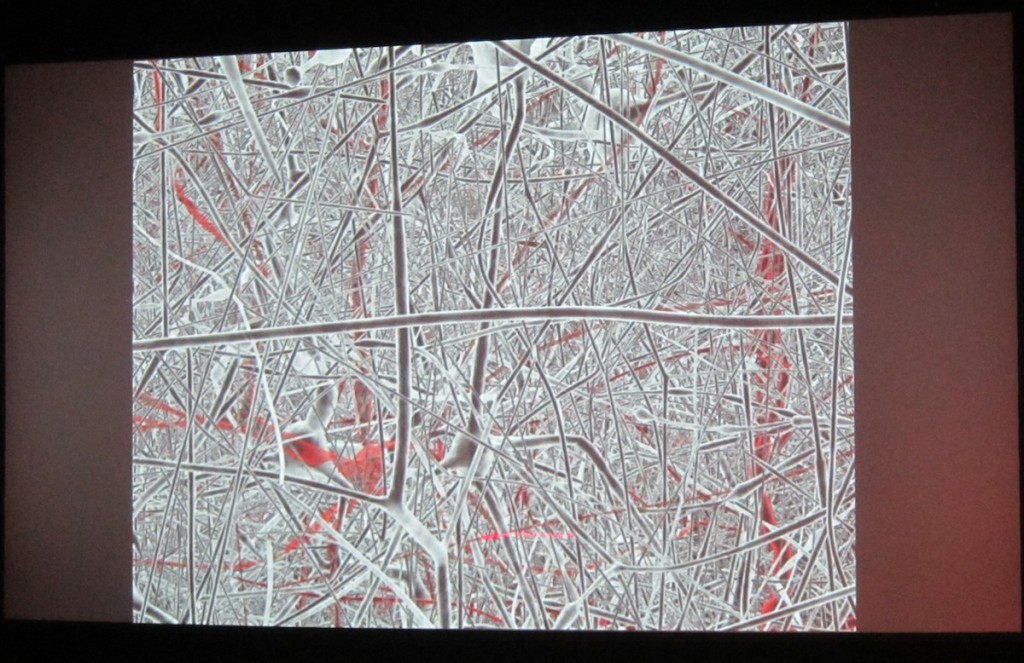 The rough process is to analyze physical slices of a mouse brain rather than chemical and electrical signals. From this information, they can construct a 3D model of a mouse brain itself using advanced software. For those of you who are familiar with 3D modeling, can you imagine the polygon count?

Gewaltig also made a distinction in their approach from science-fiction style speculation. When thinking about artificial intelligence, we often think of high-level cognitive functions: reasoning, memory and emotional intelligence. But, the brain also handles numerous non-cognitive functions: regulating muscles, breathing, hormones, etc. For this reason, HBP is creating a physical model of a mouse, where it will eventually interact with a simulated world. Without a body, you cannot have a simulated brain, despite what many films about AI suggest. 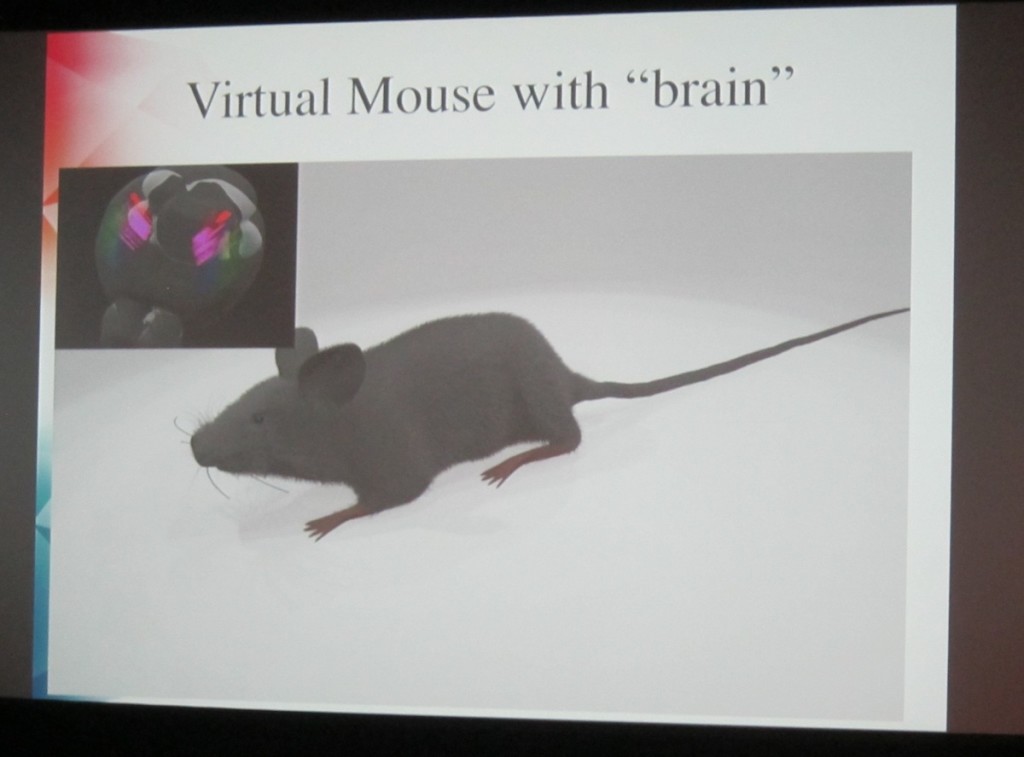 While I still have doubts about the efficacy of the Human Brain Project, I left impressed. The goal is not a successful simulated brain but instead to experiment and push the boundaries of the technology as much as possible. Computing power will catch up some day, and this project will help push future research in the proper direction. The results will be open data available to other scientists. Is that something we can really argue against?

Last Thursday, I exhibited After Thought, a performance-installation that I developed while at Eyebeam Art + Technology Center at Art in Odd Places in New York (check out their AIOP website, there’s some great projects there).

As the name implies, these performances that happen in unusual spots in the city, this one being at the 14th Street Y. 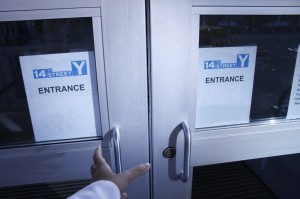 We scheduled this to happen during the CSA pick up where folks were picking up their weekly organic veggies. 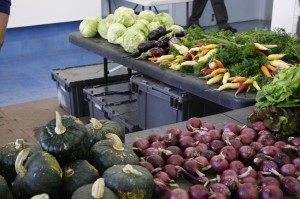 Here I am posing with my two assistants: Minha Lee and Zack Frater. We used the lab coat + eyeglasses props to reel people in. 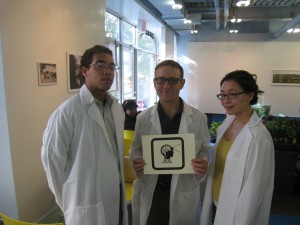 I began with a short intake form with questions such as “What is your greatest physical fear?” I discovered that an inordinate number of people are afraid of snakes. 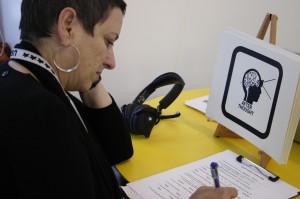 After completing the intake form, people wear a brainwave-reading headset â€” I use the Neurosky Mindset â€” to capture stress and relaxation levels. They turn over flashcards while I monitor their reactions.

I can’t see what they are looking at. If their their stress or relaxation responses spike, I ask them for the card, then note it down on my result form. This person was especially negatively triggered by cockroaches. 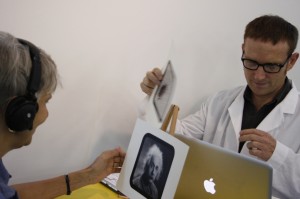 And this gentleman was relaxed by the guys hanging out in the hot tub. Give me that flashcard! 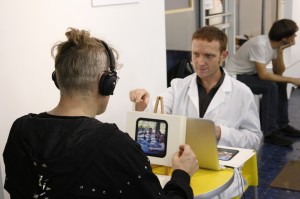 Minha, who interned for me at Eyebeam also administered tests. This subject has no reaction, good or bad to the image of the police car. 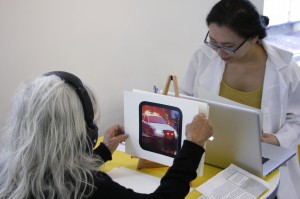 Here you can see how the intervention occurs. People had no idea why we were there. Many were suspicious, thinking that we our Scientology-style relaxation/stress test was trying to sell them something or lure them into a cult. Others were immediately intrigued. Some needed convincing. One respondent offered us a bundle of swiss chard for barter. 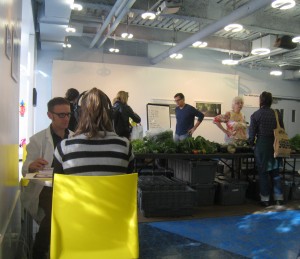 Afterward, I would sit down with each respondent and we would talk about their results. “Why did you get stressed out by the cute puppy?” 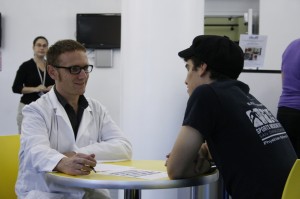 In the background here, you can see one of the two curators, Yaelle Amir, who demonstrates her ambidexterity by texting while typing. 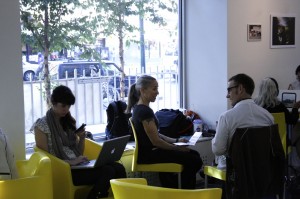 One of my last tests of the day was with Stephanie Rothenberg, a good friend of mine. I knew her too well to provide unbiased analysis. The image of the crying baby was one of her stress indicators. Hmmm. 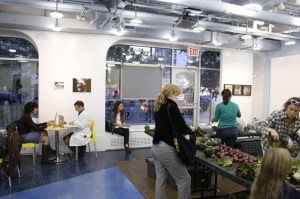 I just finished writing the software which tracks your emotions using brainwave analysis. From a flashcard-style test, it creates a custom video for each participant from a melange of silent clips such as balloons floating in the sky, a tapping foot and an angry dog. This weekend Flux Factory along with The Metric System will be presenting The Science Fair, (New York), where I will showing After Thought, whichÂ I developed as aÂ resident artist at Eyebeam Art + Technology Center. 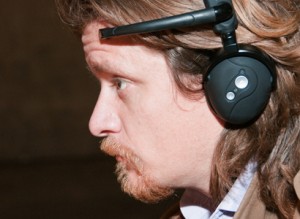 This project expands my deep interest in personal emotional spaces created by video. My first exploration was with Future Memories in 2006, which sources the “in-between” shots from Hollywood cinema to create a series of black-and-white videos which evoke feelings of displaced familiarity. 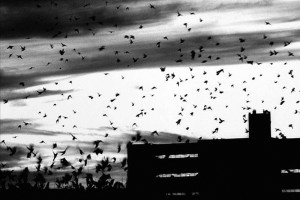 With my Home Stories (2008) project, which I call an “experimental narrative,” I use a silent, looped 5 minute edit from assorted 8mm home movies (including my own parents, now deceased) and invite 5 different storytellers to come up with narratives for the video. 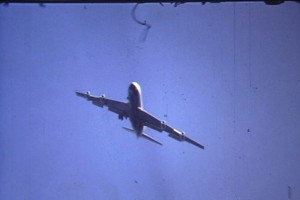 I’m excited to see the possibilities. If you are in New York this weekend (June 5-6), you will be guaranteed a memorable experience by coming to The Science Fair.