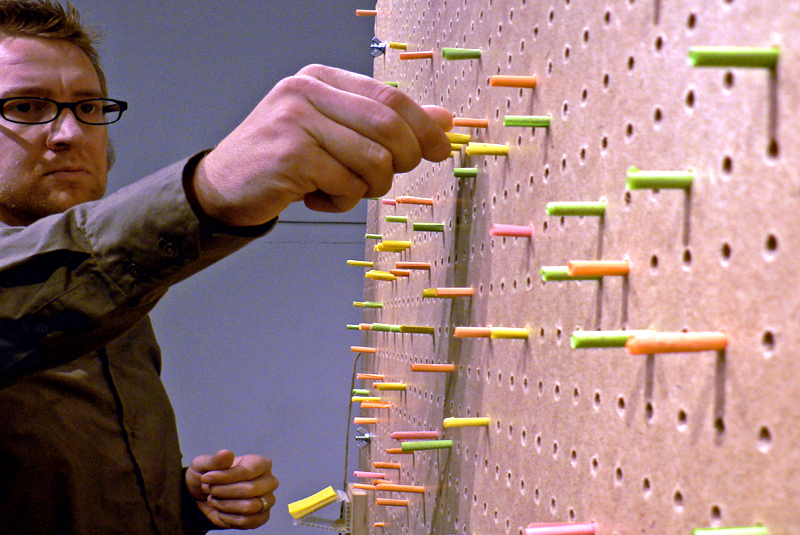 2 x 2 portrays the psychology of online social networks such as MySpace, Friendster and Second Life. Viewers write on Post-its, which they then roll up and insert into the message board. They may also read what others have written acting as ‘lurkers’ like many in these environments.

2 x 2 investigates the shift towards large-scale social communities on the web such as MySpace, Friendster and Second Life. The artwork consists of two components: a messaging board placed in a public space and a series of large-scale photographic compositions of the resulting messages.

The message system is a vertical grid, which operates simultaneously as an anonymous and public information system. Viewers write notes on 2″ square Post-it notes, which they then roll up and insert into a hole. We imagine that this represents not just metaphor but the actual psychology of information space. A temporary community builds around the artwork. We hope to scrutinize vectors of progress and social communities through the lens of contemporary art theories of relational aesthetics.

We collected the detritus of Post-its and treated them as souvenirs of interior dialogues, passing conversations and interpersonal experiences. We placed every note into thematic categories such as “Sincere Sentiment”. “Existential Crisis” and “Missing.” We then photographed each set against black, situating the messages in a dimensionless space while still retaining their tactile residues of folds, creases and tears.

Watching like a “lurker” in web space, we also hope to portray the other side of online social communities: where one can view without registering a presence. By simultaneously positioning the artwork itself both as social experience and as a traditional aesthetic object, 2 x 2 captures this dual nature of intensified activity and utter anonymity found in these social spaces.