Yesterday, Victoria Scott, my collaborator on the Gift Horse — a 13-foot high sculpture of the Trojan Horse — managed the installation of the giant sculpture for ArtMRKT San Francisco, from May 19th-May 22nd. Who wasn’t there? That’s right, me â€” I was busy installing my “2049” exhibition at The Dump â€” and am so thankful that Victoria was able to run this one out.

Here’s the morning load-up from Yosemite Studios. Tamara Albaitis and Noah Lang (special project manager at our gallery: Electric Works) and Victoria push the chest through the studio and into the freight elevator. 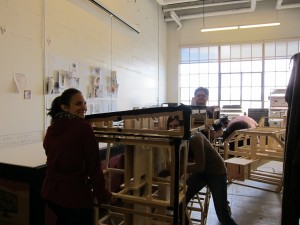 Here, Noah Lang is assembling panels while listening to a reading ofÂ Homer’s Odyssey for inspiration. 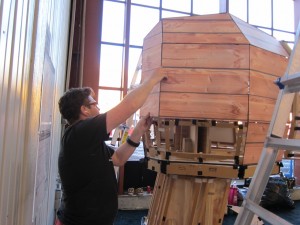 Jessica (the fourth member of the crew) assembles panels on the hexagonal wheels. 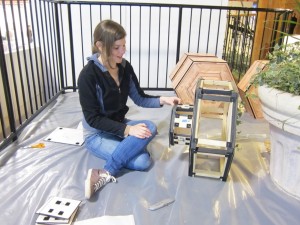 Here the horse stands naked before being panelled. 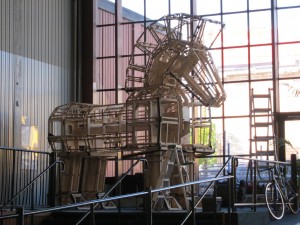 And in its final form, the horse, peers through the entrance to ArtMRKT — come and see it, along with all the other great art at this new San Francisco art fair! 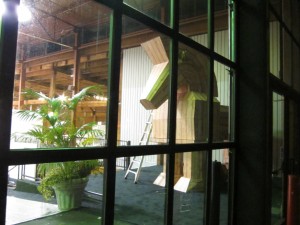 Today we shifted to the virus-making portion of Gift Horse, where anyone can assemble a virus sculpture to be placed inside the belly of the Trojan Horse. The gesture is to gather people in real space, give them a way to hand-construct their “artwork” and to hide hundeds of the mini-sculptures inside the horse.

The first virus to go inside, the Rat of the Chinese zodiac, was The Andromeda Strain, an imaginary virus from the film. This father-daughter team cut, folded and glued the paper sculpture together and she did the honors of secreting it inside the armature. 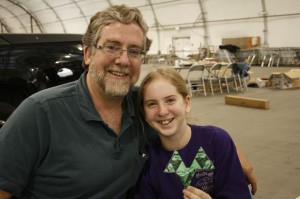 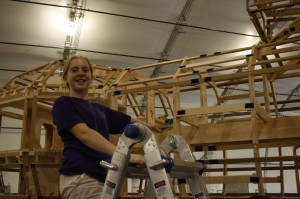 It takes a long time to cut each virus from the printed sheet. This is where the lasercutter from the Tech Shop came in handy. In the afternoon, we traced the outlines of the Snow Crash virus and tried cutting it out. After about an hour of fiddling around with settings and alignment, I was able to get a batch done. 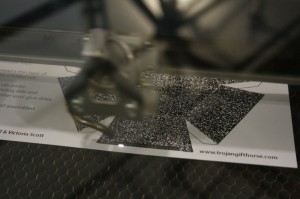 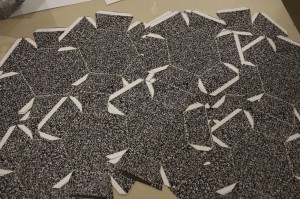 This halved the assembly time from 30 minutes to 15 minutes, bypassing the tedious cutting step. Perhaps this is a compromise in the process of hand-construction techniques, but I’ll gladly make the trade-off for practicality.

The next person to sit with us was Jeff who worked on one of the freshly-cut Snow Crash viruses. 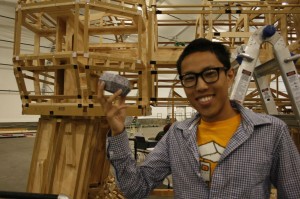 Once finished, it joined The Andromeda Strain. Come on down to South Hall (435, S. Market, San Jose) and check us out â€” we will be holding workshops on building viruses all weekend. 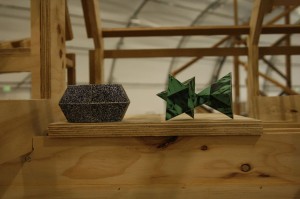 After the first month, we are 31% funded on the 13-foot-high Gift Horse for the 01SJ Biennial. A good initial run, but its starting to feel a little tight, so please consider a Kickstarter donation to the Gift Horse project. 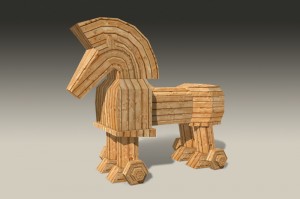 We have been busy working on the internal structure and final models in Sketchup. The skeleton proved to be an advanced wood project since the exterior printed digital panels (see model above) will be exactly fitted to make it look like giant-sized 3D model of a horse.

Working with our friend, Rob Bell, we have come up with this preliminary Sketchup design, which will be computer-cut with his ShopBot. This awesome piece of machinery, along with his expert skills, takes the 3D files and makes exactly the shape we need from a sheets of 4×8 wood. 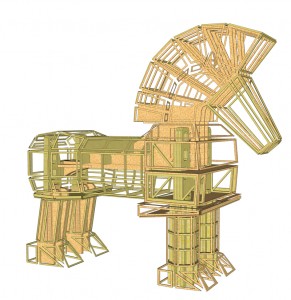 We’re trying to build this as sustainably as possible with recycled wood and a bioboard cladding. This makes it more expensive, so again, please consider a donation to help us complete this project.

Finally, it will be stuffed full of viruses. Paper viruses, that is. 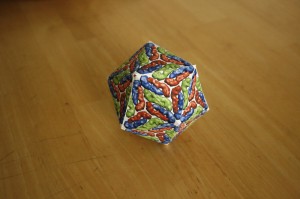 Last night I saw Life 2.0, a new film by a friend of mine,Â Jason Spingarn-Koff,Â which follows three storylines of people heavily involved in Second Life, an environment that I use in many artworks. As a veteran SL user and ex-documentary producer, I was deeply impressed. 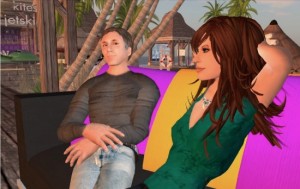 Spingarn-Koff expertly mixes live footage with that from Second Life (SL) and delves into the desires, motivations and homes of four subjects, covering three facets of the bizarre “in-world” culture of SL: romantic relationships, running a fashion apparel business and a journey into self-discovery.

What we watch unfold is tension between traditional notions of family and vast amounts of time the interviewees spend in Second Life. The film portrays people who live on the extreme end of SL culture, spending upwards of 14 hours a day in the virtual environment. One woman lives in the basement of her parents house in Detroit and is often shown smoking cigarettes and operating her business while wearing a shabby pair of pajamas. Another person, a 30-something man isolates himself from his fiancÃ©e while operating his avatar â€” a pre-teen (non-sexualized girl. The third storyline is a romance between two people who met in SL while in unhappy marriages and are now sorting out their SL romance while they break up their families..

As I watched the beautiful machinima, I kept thinking “this is not the Second Life that I know” as my own viewing experiences are ripe chunky graphics and awkward render legs. Its one I like about the environment: the lo-fi nature of it, but that likely wouldn’t translate well to the movie screen. The production values in Life 2.0 are excellent.

Spingarn-Koff deploys the classicÂ tactic of “tell me a story” and connects us to the intimate world of several strangers, who live the lives that we simply do not want. And he does it with compassion to the subjects, displaying his sincere intentions. The stories are touching and the tone is subtle. The subjects are not misanthropic as many would think. Mostly serious, the film is punctuated with striking humor such as when a lawyer files a lawsuit against other avatars for copyright infringement then reads the avatar names of the plaintifs such as “Stroker Serpentine” and “Munchflower Zeus”.

My main criticism is that he portrays only the addictive side of Second Life with people who overuse the environment and become mired in it. Life 2.0 is one of the few mainstream windows into this unique culture, and the film reinforces the media perception that this space is ripe with addicts. My personal experience is that this p.o.v is overstated as most people in SL are moderate users of the environment.

Don’t miss this one! Its on the festival circuit right now. Also, the interviews with Philip Rosedale, CEO of Linden Lab,Â are fantastic. He looks like an avatar!

The next screening is in New York onÂ May 11 at IFC Center.

If you are in New York this weekend, come on out to P.S. 1 this Saturday for the Performa 07 book launch. We’ll be there in spirit or maybe even in Second Life. 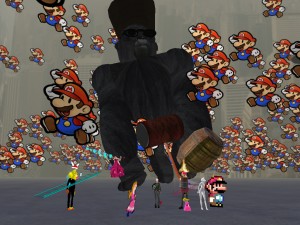 For Performa07, Second Front performed Wrath of Kong, which mixed the Kong Kong legend with the pop-culture iconography of Donkey Kong.

Featured in the catalogue essay on virtual worlds is an analysis of the early performance art works in Second Life, including work by the Mattes, my own Paradise Ahead series, Patrick Lichty, Gazira Babeli and of course Second Front.

Live from New York this Saturday: The Great Avatar Challenge. This mixed-realities performance is a collaboration with Stephanie Rothenberg forÂ Eyebeam’s Mixer: Olympiad in New York. Get your tickets now, as it will be certain to sell out. 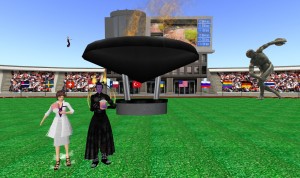 Our performance is one of many spectacular events going on in this two-night series. We will be conducting races where real-life contestants will compete against my Second Life avatar, Great Escape. The course winds through Eyebeam’s main space and is a hurdle-sprint, in a gesture of pure physicality against a simulated one. 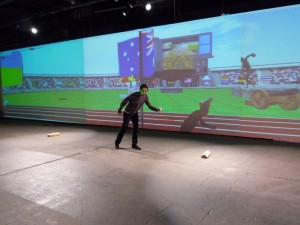 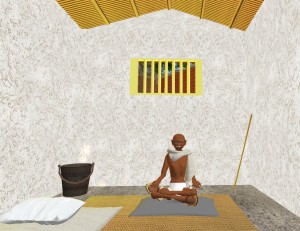 Gandhi has been imprisoned for a year, mirroring his historical imprisonment. 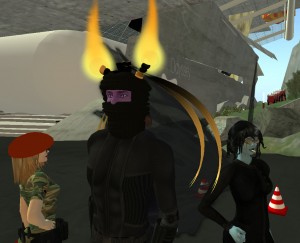 Several of us congregated at the gates to the prison, from left to right is Bibbe Oh (aka Bibbe Hansen), Great Escape (aka Scott Kildall) and Liz Solo. The full Second Front ensemble was there including Tran Spire (aka Doug Jarvis), Gazira Babeli, Fau Ferdinand (aka Yael Gilks) and Man Michinaga (aka Patrick Lichty). 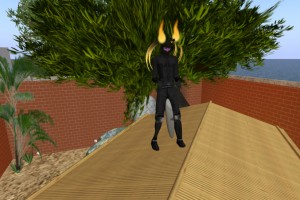 We began the break-out with jackhammers and drills, but the jail ceilings were constructed out of a digital composite that resisted our tools. Ever resourceful, we upgraded to bulldozers and then to dynamite. 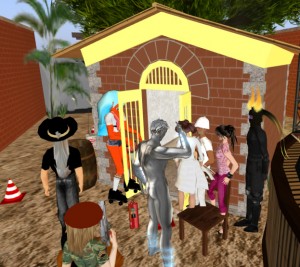 KA-BOOM! The door popped open and out came Gandhi. Free at last, free at last! 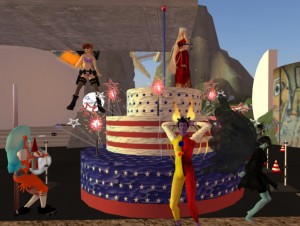 Our special surprise, for Gandhi was Cicciolina (played by Patrick Lichty) popping out of cake. Happy Release, Gandhi! 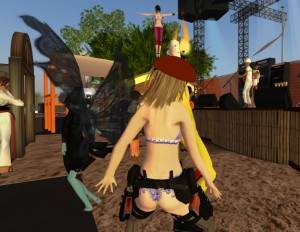 After a year being cooped up in prison, I’m sure that Gandhi appreciated the lap dances from Second Front (Bibbe’s thong pictured here)

As part of the Postgravity Art: Synaptiens event which invites hour-long interventions into a 50-hour performance cycle, I will be enacting a two-person performance: Space Age Love. 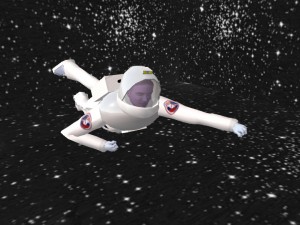 Here, Victoria Scott and myself will be floating in space — in Second Life space — and communicating via chat, while our cameras point at one another and our astronaut avatars perform acrobatics. The two viewpoints will be projected onto the Synaptiens structures at Eyebeam. This is happening today (Nov 12 2009) along with performances at 2:30 by Jamie O’Shea and 4:30 by Rashaad Newsome.

I call this an auto-biographical performance as the two of us are floating between San Francisco and New York, working out opportunities, desires and finances to find a home. The chat will be entirely improvised, discussing these issues in live space at Eyebeam.

Come to the Changing Labor Value panel at the New School today, TuesdayÂ  at 5:30pm. Victoria Scott and I will be showing a portion of the No Matter â€” a fly-through video in the reception beforehand. I’ll be there in person! 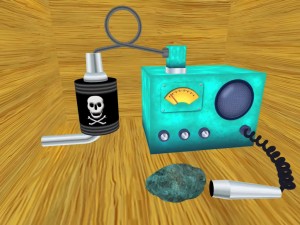 This event is a prelude to Internet as Playground and Factory that will be taking place from November 12-14 where we’ll be presenting the No Matter project in context of the labor that we contracted in Second Life to materialize 40 imaginary objects.

Brooklyn is Watching (BiW) hosts a sim in Second Life which is a wonderful curatorial project that invites SL artists to create artwork on their space. The resulting creations range in quality and are subject to commentary by a weekly podcast by several commentators. I’ve been a guest podcaster a few times, participating in a production of the absurd: a radio podcast commentary of an entirely visual environment that most people don’t understand. 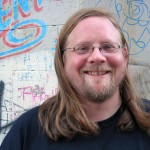 On Friday I went to the BiW presentation of The Final Five at Jack the Pelican Presents (JTTP) Gallery in Williamsburg. These were the five selected artworks which were presented on montiors with headphones and a voting sheet. My major critique is that the BiW project seems to presents Second Life art from the vantage point of an insider’s perspective rather than a contemporary art point-of-view.

This doesn’t have to be the case. There are a number of works which bridge the virtual and the real including RMB City (Cao Fei), Invisible Threads (Stephanie Rothenberg and Jeff Crouse), The Salt Satyagraha (Joe Delappe), in all fairness to the dialogue, my collaboration with Victoria Scott, No Matter and not to overlook the recent Summer of Love 2.0 (Patrick Lichty)

The presentation of the BiW works at the gallery reinforced this â€” a level of confusion for the viewers who often had more general questions of what is Second Life and so often didn’t even understand what they were judging. Coupled with the fact that you had to put headphones on to listen to one our rambling podcasts, I wondered how successful this physical exhibition was.

The strength of Brooklyn is Watching is in the community it creates â€” and I would like to see them explore this side of things: discussing Second Life works but in a way that creates a tangible bridge to the real. This is why the podcasts have been sucessful because it makes the broadcasters and the audience strain to understand what is not in front of them: an imaginary realm that reflects the nature of Second Life itself.

I had a little fun of my own and during the show itself, I sneaked onto the computer and transferred $50L to my own avatar, Great Escape from the BiW avatar. Hey, performance art costs money!