Just after the Dow Jones dropped 1000 points on Aug 24th (yesterday), I checked out how EquityBot was doing. Annual rate of return of > -50% 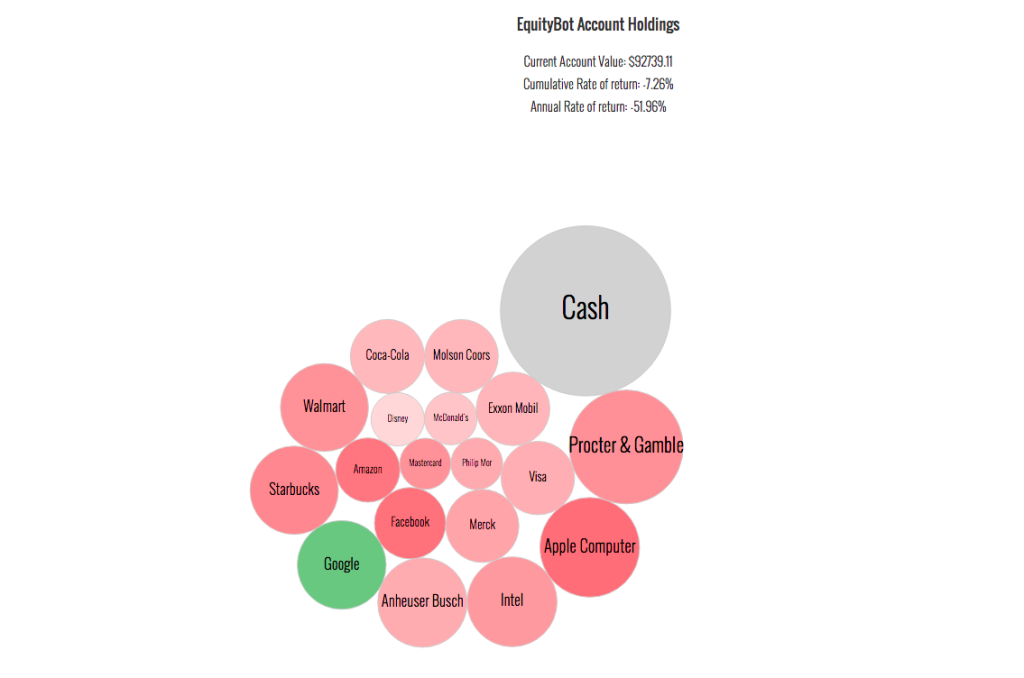 Crazy! Of course, this is like taking the tangent of any curve and making a projection. A day later, EquityBot is at -32%. 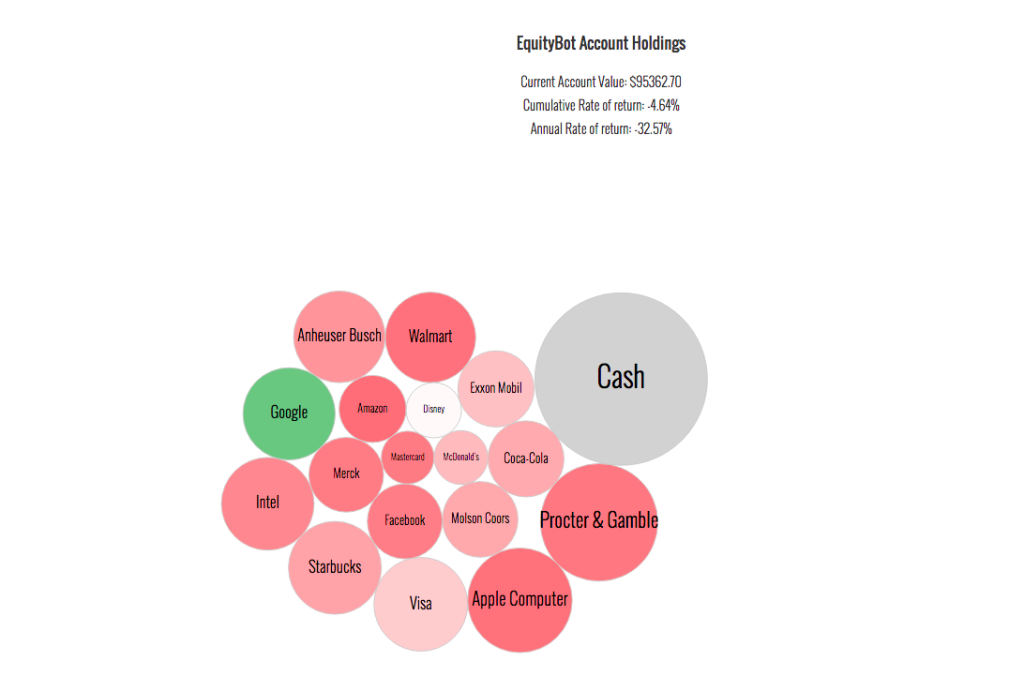 Still not good, but if if you were to invest yesterday, you could be much richer today.

I’m not that much of a gambler, so I’m glad that EquityBot is just a simulated (for now) bank account.

EquityBot will be presented at this year’s International Symposium on Electronic Art at Vancouver. The theme is Disruption. You can always follow EquityBot here: @equitybot.

EquityBot is an automated stock-trading algorithm that uses emotions on Twitter as the basis for investments in a simulated bank account.

This art project poses the question: can an artist create a stock-trading algorithm that will outperform professional managed accounts?

The original EquityBot, what I will call version 1, launched on October 28th via the Impakt organization, which was supported the project last fall during at artist residency.

I intended for it to run for 6 months and then to assess its performance results. I ended up letting it run a little bit longer (more on this later).

Since then, I’ve revamped EquityBot about 1 month ago. The new version is doing *great* with an annual rate of return of 10.86%. Most of this is due to some early investments in Google, whose stock prices have been doing fantastic. 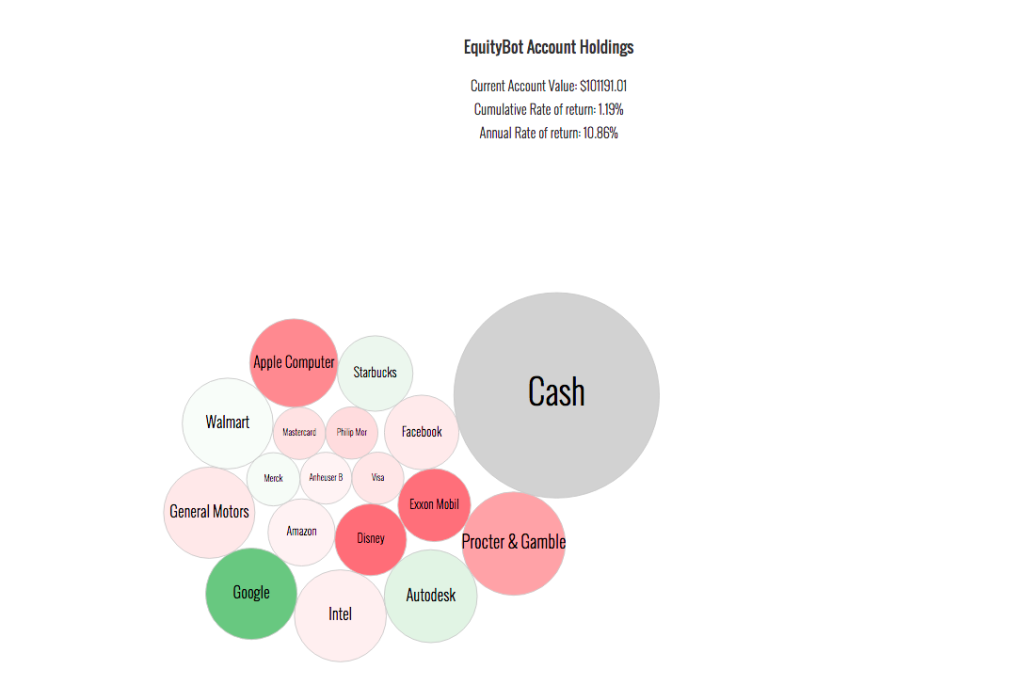 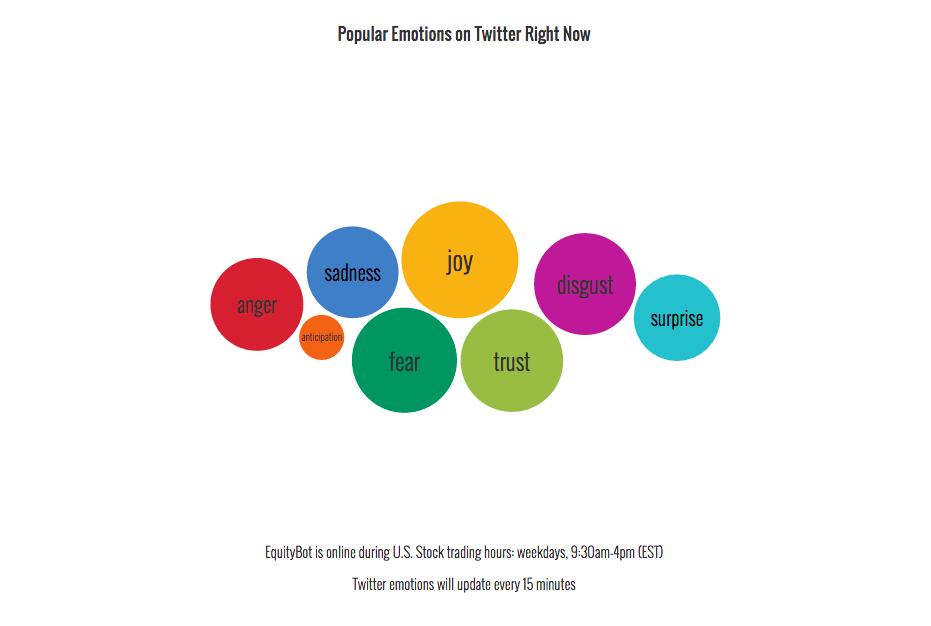 The software code captures fluctuations in the number of tweets containing these emotions. It then correlates them to changes in stock prices.  When an emotion is trending upwards EquityBot will select a stock that follows a similar trajectory. It deems this to be a “correlated investment” and will buy this stock. 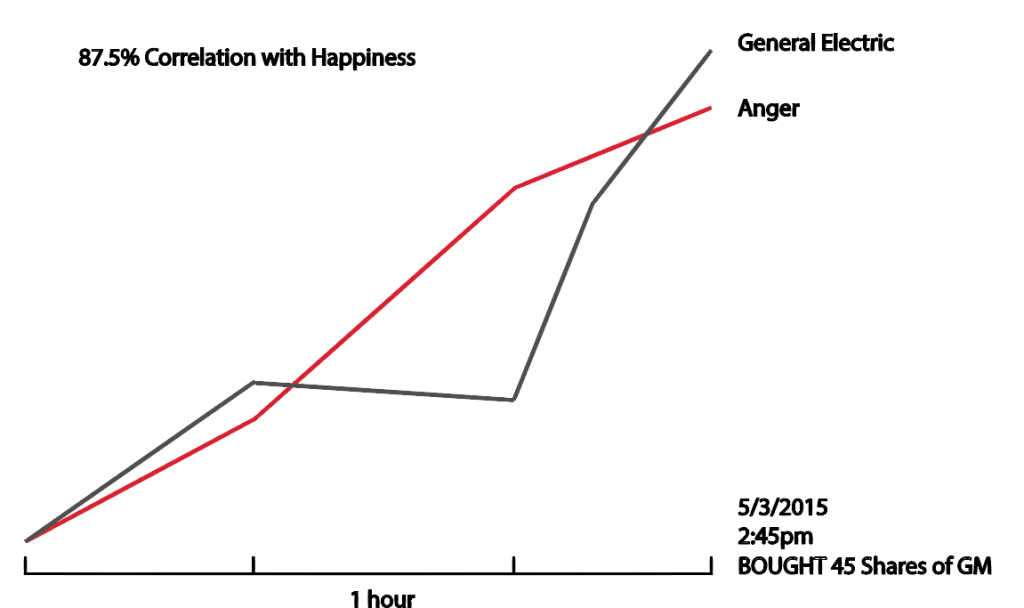 The ISEA version of EquityBot will run for another 6 months or so. The major change from version 1 was that with this version, I tracked 24 different emotions, all based on the Plutchik wheel. 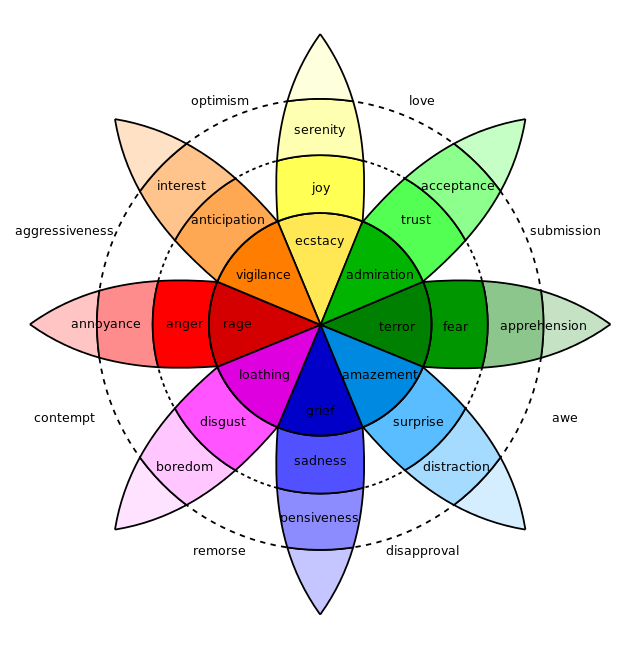 The problem that I found was this was too many emotions to track, both in terms. Statistically-speaking, there were too few tweets for many of the emotions for the correlation code to properly function.

The only change with the ISEA version (what I will call v1.1) is that it now tracks eight emotions instead of 24. 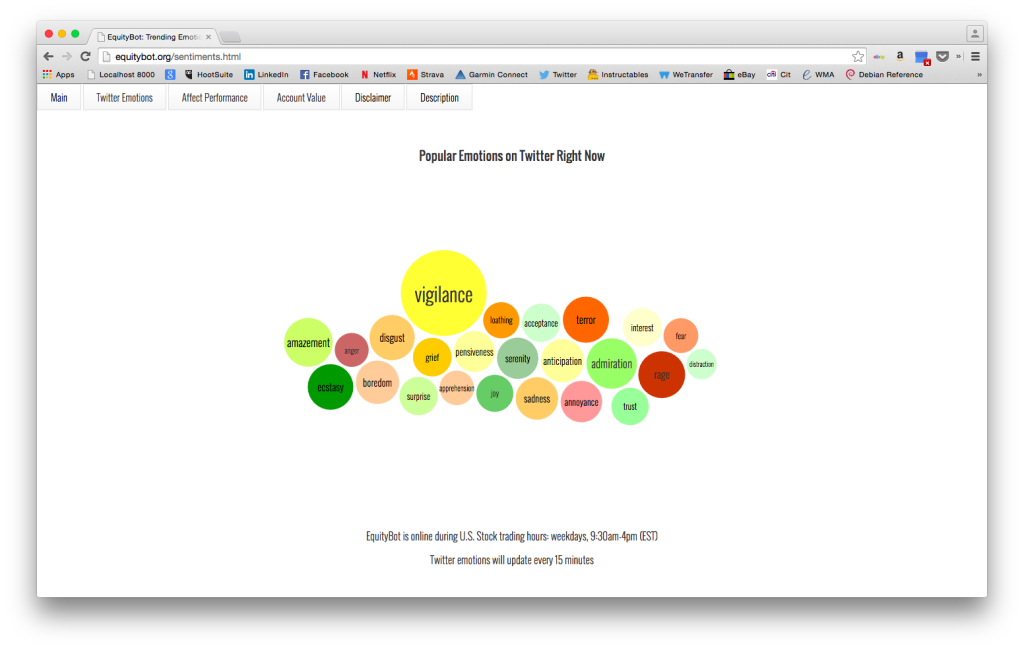 How did v1 of EquityBot perform? It came out of the gates super-strong, hitting a high point of 20.21%. Wowza. These are also some earlier data-visualizations, which have since improved, slightly so. 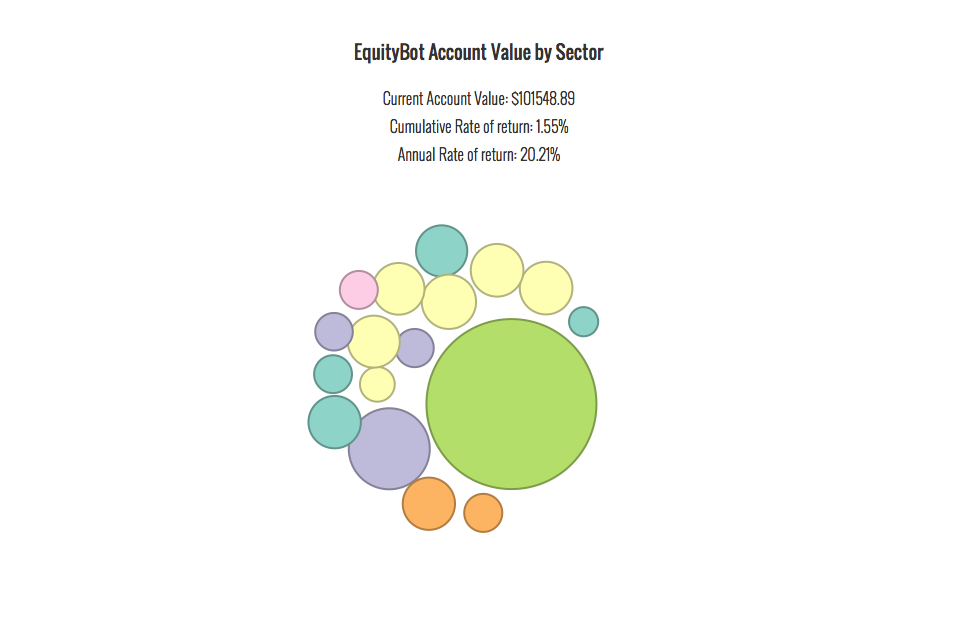 But 1 month later, by December 15th, EquityBot dipped down to -4.58% percent. Yikes. These are the vicissitudes of the market and a short time-span 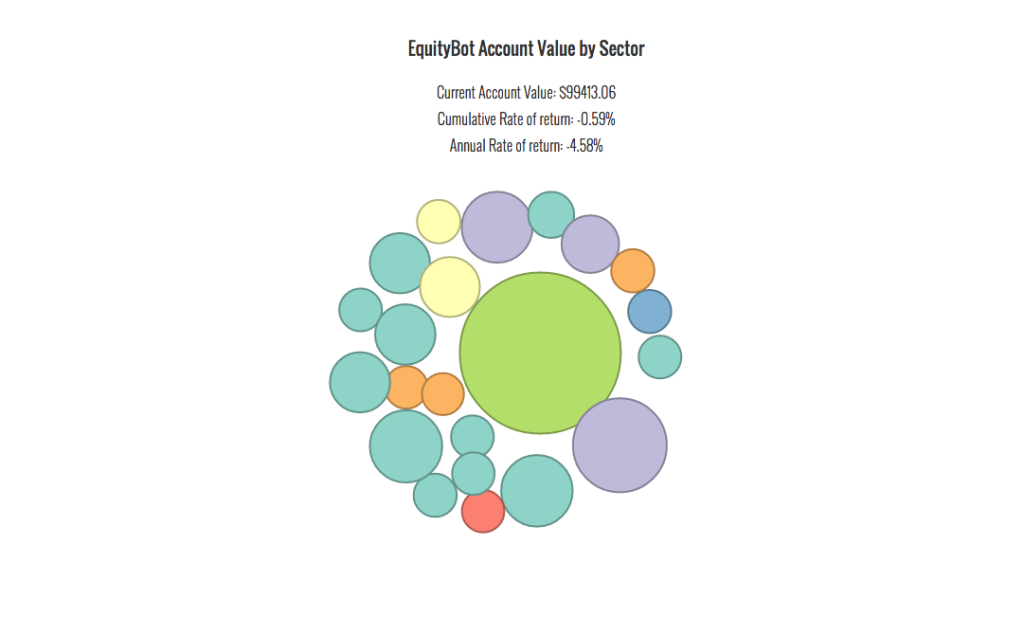 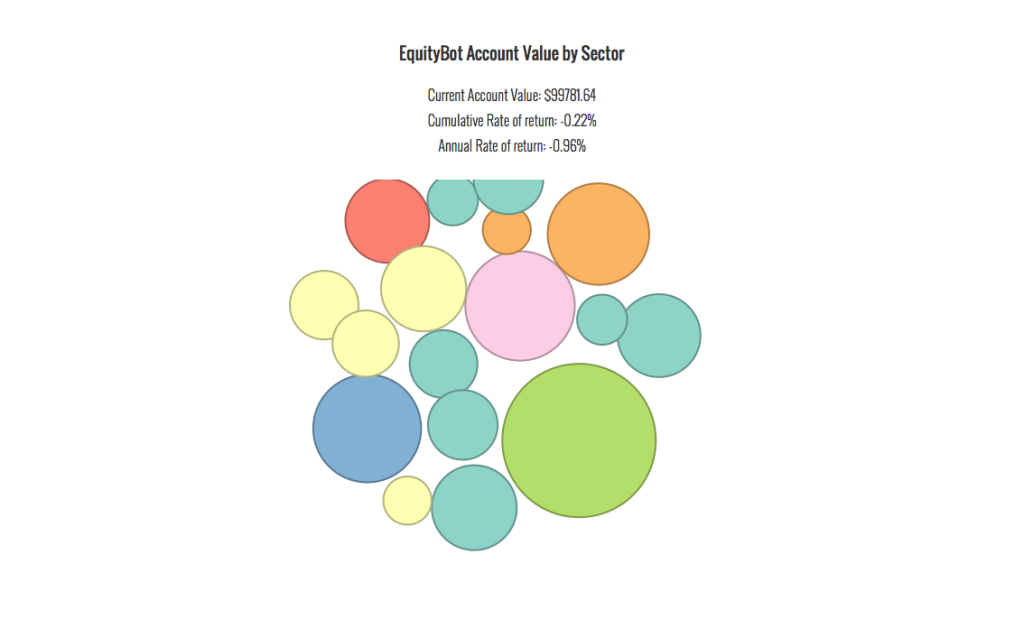 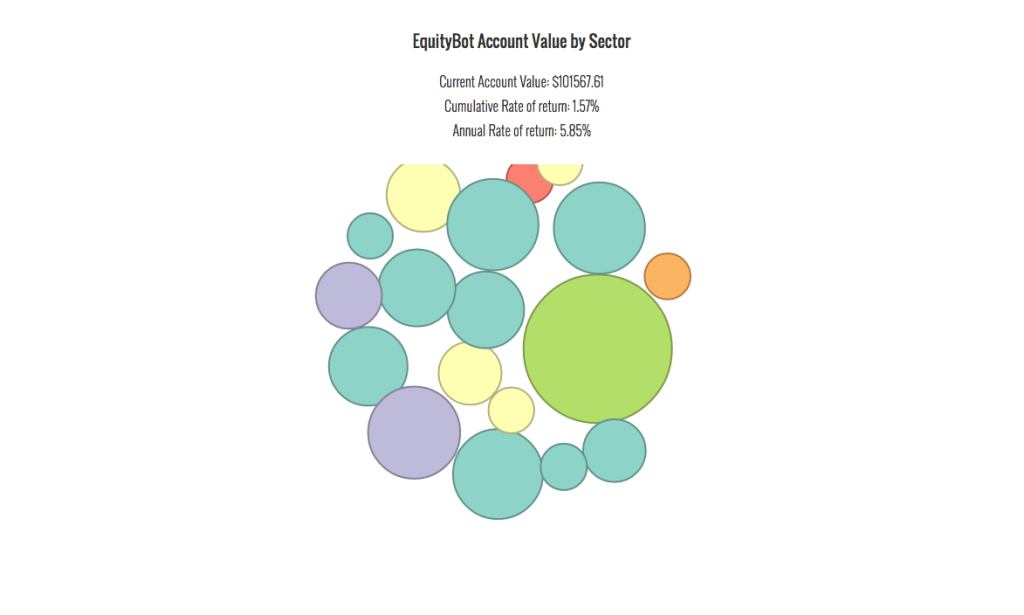 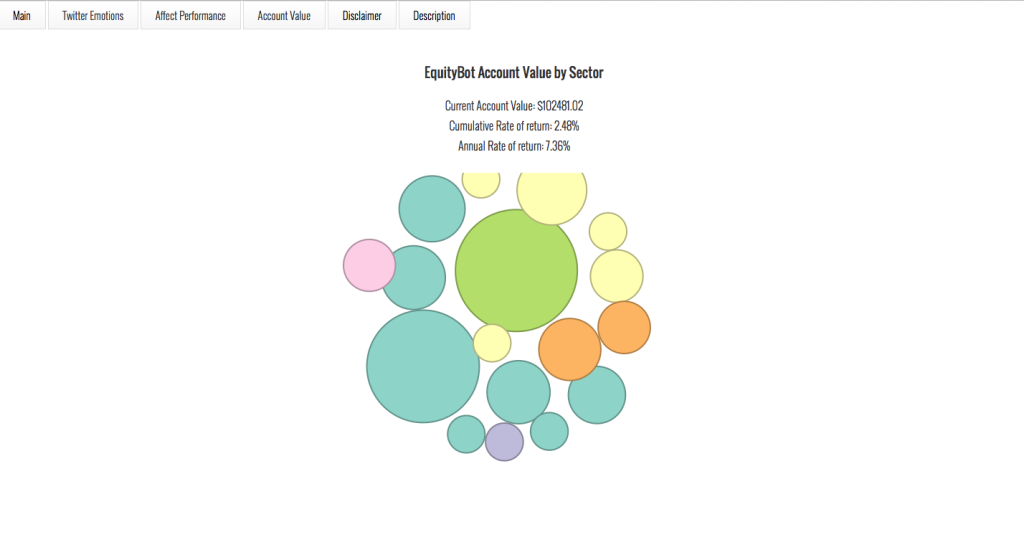 I let the experiment run until June 11th. The date was arbitrary, but -9.15% was the end result. This was pretty terrible. 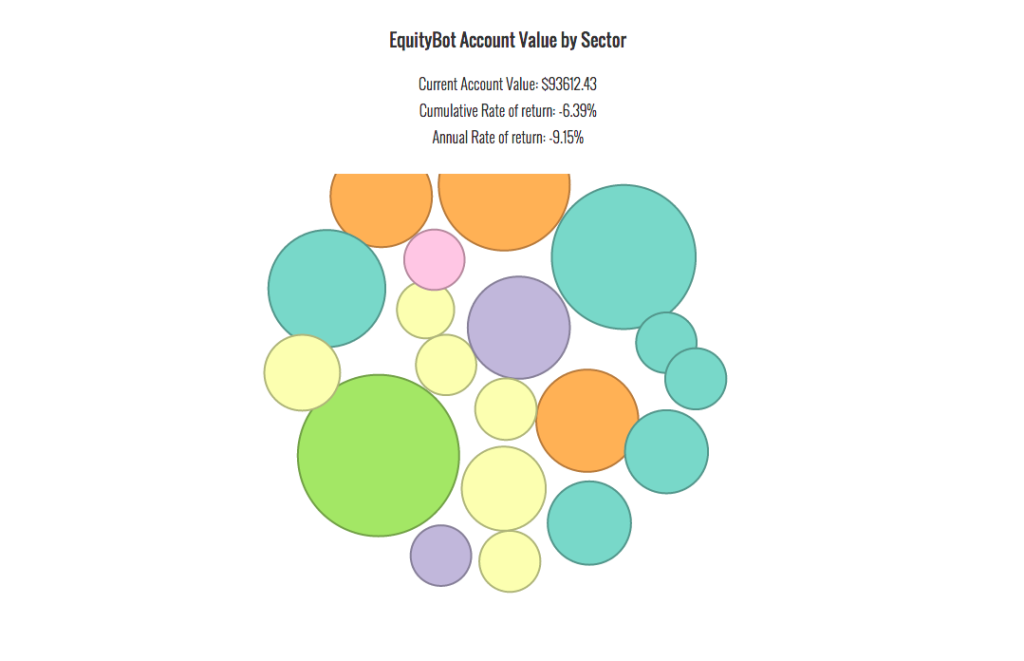 And which emotions performed the “best” — the labels aren’t on this graph, but the ones that were doing well were Trust and Terror. And the worst…was Rage (extreme Anger). 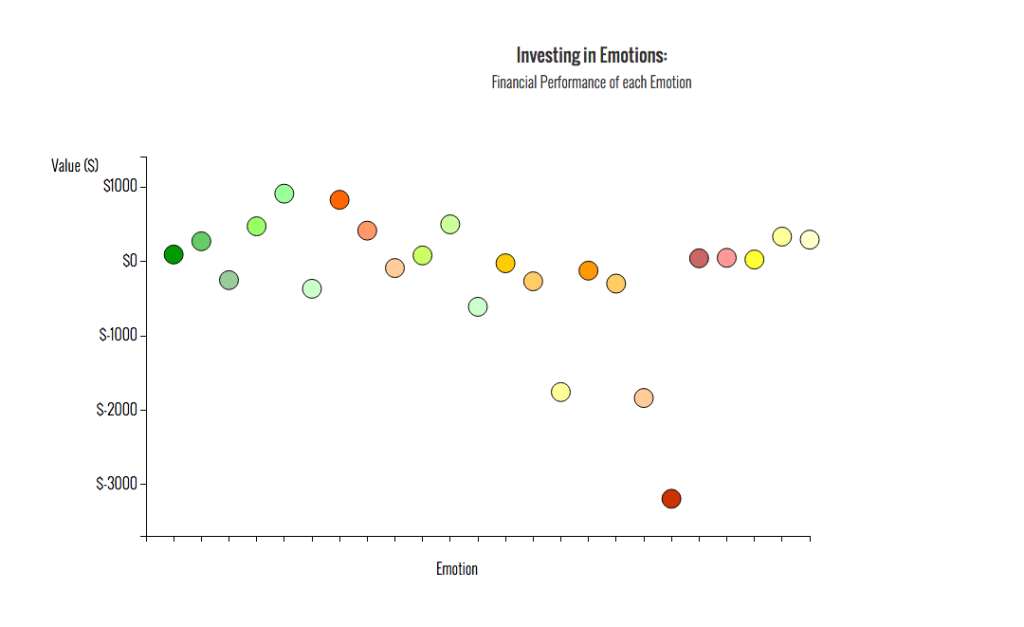 How do other managed accounts perform? According to the various websites, these are the numbers I’ve found.

This would put EquityBot v1.0 as dead last. Good thing this was a simulated bank account.

I’m hoping that v1.1 will do better. Eight emotions. Let’s see how it goes. 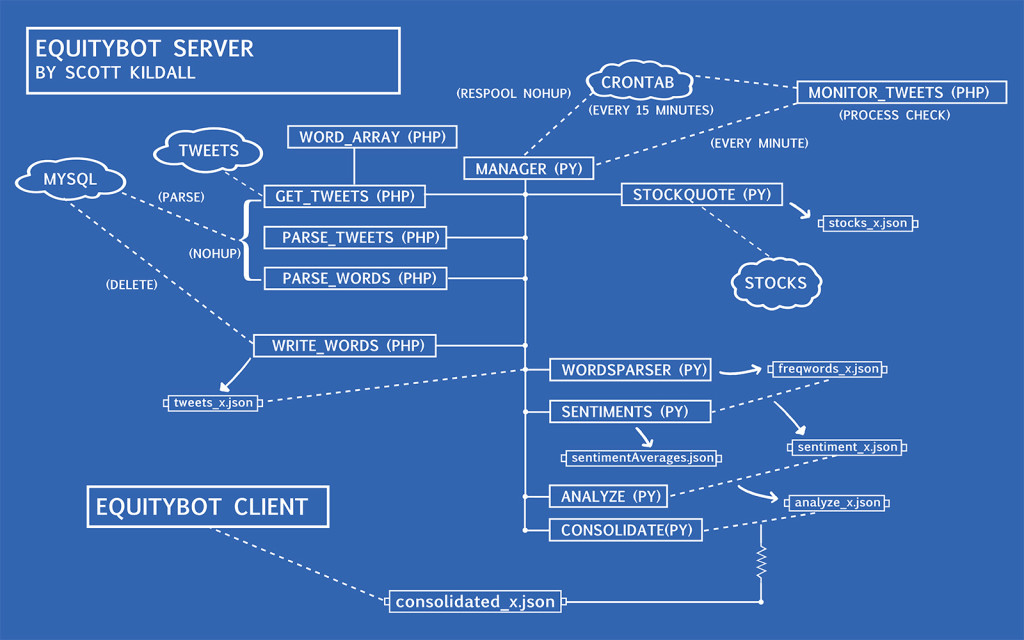 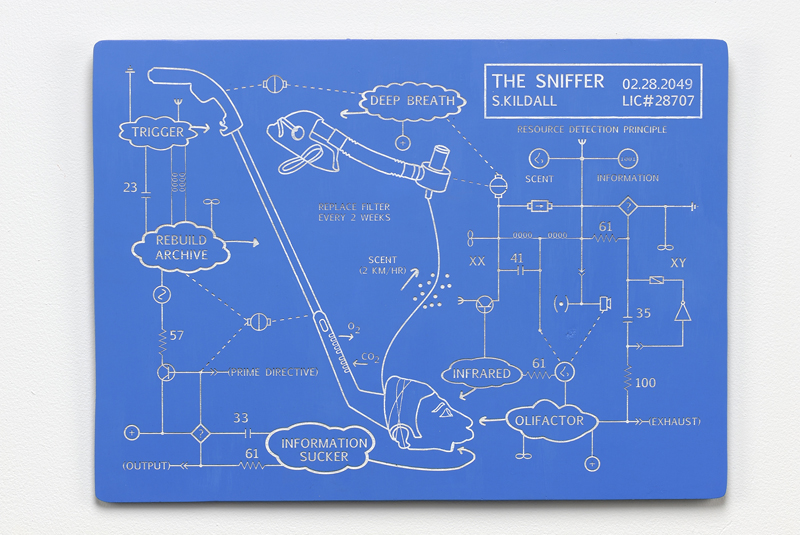 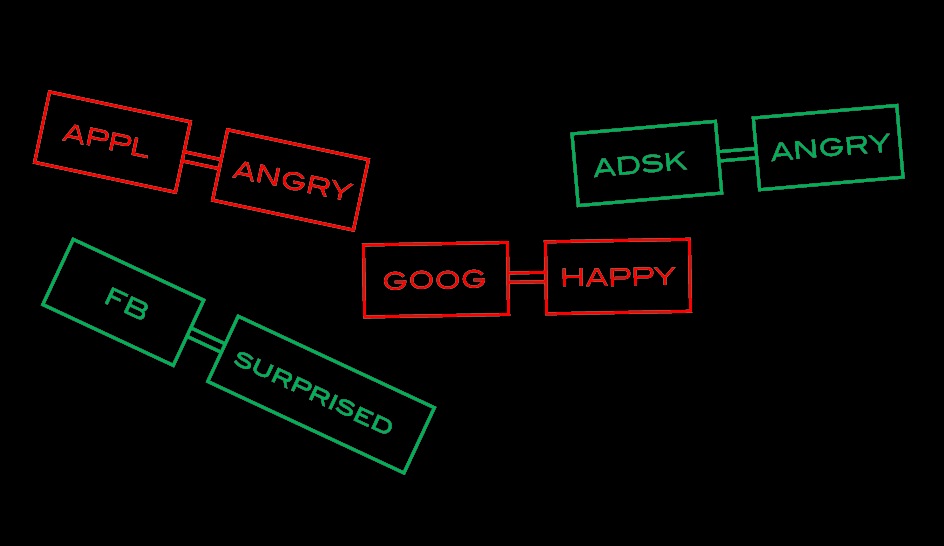 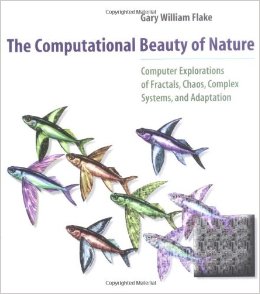 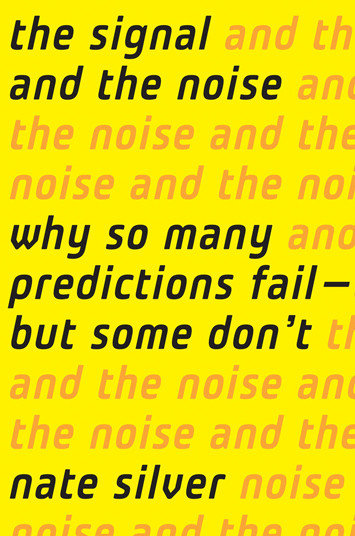