My good friend and colleague, Wafaa Bilal, will be speaking this Wednesday at the San Francisco Art Institute. I’d highly recommend the talk. 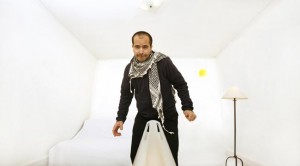 You might remember him from the “Shoot an Iraqi” project where he lived in a gallery for a month and had a paint ball gun setup to point at him. You could shoot him with the gun for $1 (I couldn’t resist spending a couple bucks).

He also created “Virtual Jihadi” were he re-engineered a US training video game so that you could be a suicide bomber instead (the piece got shut down by Rensselaer). Its unbelievable that a shut-down like this could happen well-after the censorship debates of the 60s and 70s.

He has an amazing history as a refugee from Desert Storm and US transplant. His brother and father (both civilians) were both killed in Iraq by American drone attacks in 2004.