My writing (below) was originally printed as part of the Disobedient Electronics project by Garnet Hertz. It is a limited edition publishing project that highlights confrontational work from industrial designers, electronic artists, hackers and makers that disobey conventions. 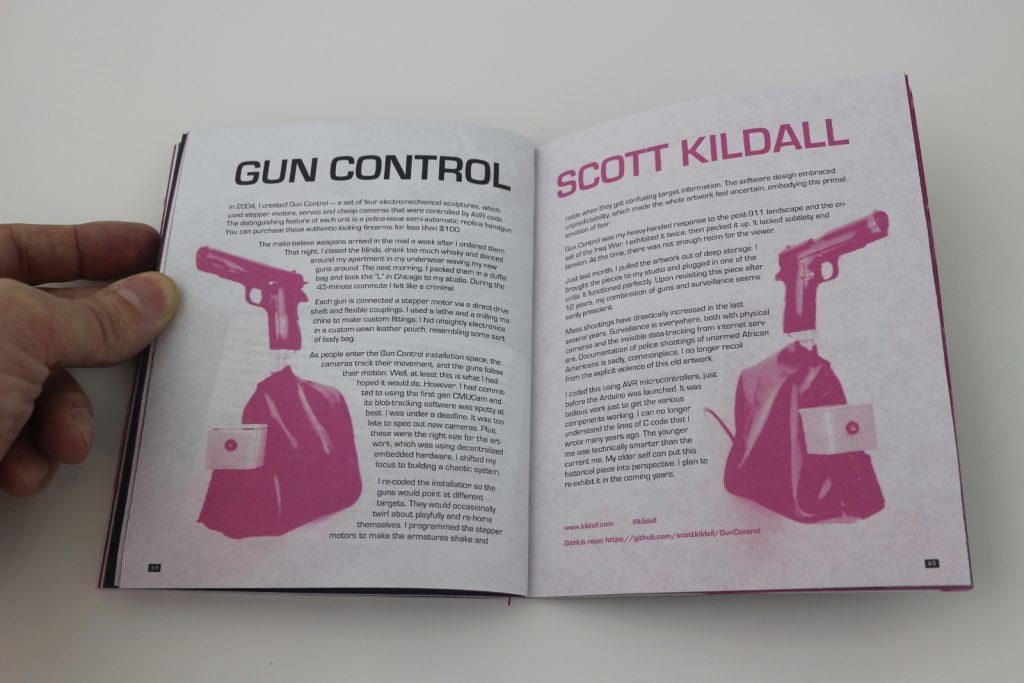 In 2004, I created Gun Control — a set of four electromechanical sculptures, which used stepper motors, servos and cheap cameras that were controlled by AVR code. The distinguishing feature of each unit is a police-issue semi-automatic replica handgun. You can purchase these authentic-looking firearms for less than $100.

The make-believe weapons arrived in the mail a week after I ordered them. That night, I closed the blinds, drank too much whisky and danced around my apartment in my underwear waving my new guns around. The next morning, I packed them in a duffel bag and took the “L” in Chicago to my studio. During the 45-minute commute I felt like a criminal.

Each gun is connected a stepper motor via a direct-drive shaft and flexible couplings. I used a lathe and a milling machine to make custom fittings. I hid unsightly electronics in a custom-sewn leather pouch, resembling some sort of body bag. 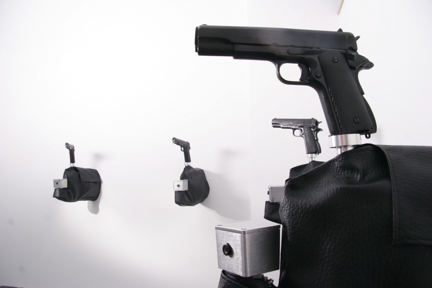 As people enter the Gun Control installation space, the cameras track their movement, and the guns follow their motion. Well, at least this is what I had hoped it would do. However, I had committed to using the first gen CMUCam and its blob-tracking software was spotty at best. I was under a deadline. It was too late to spec out new cameras. Plus, these were the right size for the artwork, which was using decentralized embedded hardware. I shifted my focus to building a chaotic system.

I re-coded the installation so the guns would point at different targets. They would  occasionally twirl about playfully and re-home themselves. I programmed the stepper motors to make the armatures shake and rattle when they got confusing target information. The software design embraced unpredictability, which made the whole artwork feel uncertain, embodying the primal emotion of fear.

Gun Control was my heavy-handed response to the post-911 landscape and the onset of the Iraq War. I exhibited it twice, then packed it up. It lacked subtlety and tension. At the time, there was not enough room for the viewer. 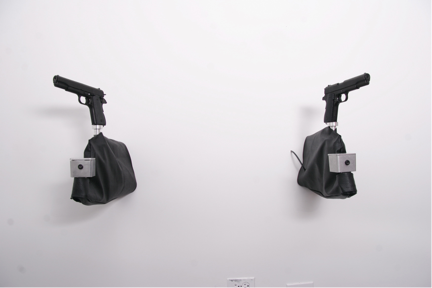 Just last month, I pulled the artwork out of deep storage. I brought the pieces to my studio and plugged in one of the units. It functioned perfectly. Upon revisiting this piece after 12 years, my combination of guns and surveillance seems eerily prescient.

Mass shootings have drastically increased in the last several years. Surveillance is everywhere, both with physical cameras and the invisible data-tracking from internet servers. Documentation of police shootings of unarmed African Americans is sadly, commonplace. I no longer recoil from the explicit violence of this old artwork.

I coded this using AVR microcontrollers, just before the Arduino was launched. It was tedious work just to get the various components working. I can no longer understand the lines of C code that I wrote many years ago. The younger me was technically smarter than the current me. My older self can put this historical piece into perspective. I plan to re-exhibit it in the coming years.