I just returned from Bangalore, India as part of the WikiWars Conference (see previous post). Organized by Nishant Shah and Geert Lovnik as part 1 of CPOV: Critical Point of View (as opposed to Wikipedia’s NPOV), the conference featured speakers from 27 different countries. 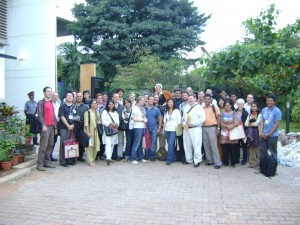 Nathaniel Stern and I presented Wikipedia Art: Citation as Performative Act in the final session of the 2-day conference, where we performed the presentation, based on the impetus behind the Wikipedia Art project, performative citations and used examples from The Miracle on 34th Street and The Digital Dark Age.

Part 2 will be in Amsterdam in March and the result will be a free book featuring a compendium of writings from the two events, which will be distributed to universities and libraries worldwide â€” a unification of academia and open culture philosophy.

This was one of the best conferences I’ve been to: well-organized with thoughtful presentations, plenty of time for in-depth discussions and a warm group of people, which resulted in some new friendships.

I was particularly impressed with Stuart Gieger’s discussion of bots in Wikipedia culture as well as Mark Graham’s analysis of uneven geographies in Wikipedia.

Stay tuned for the Amsterdam session and you can follow the CPOV blog here.

I have many more photos from the India trip on my Facebook page.