Tonight opens the full compilation of my Video Portraits artwork in the video room at Micaela Gallery (San Francisco) as part of the Winter Salon 2009 series. 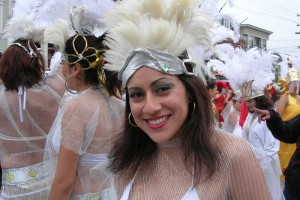 The opening reception is (Nov 5th 2009) and the show runs through January. Video Portraits (2006-2008) has been shown internationally including venues in Spain and China as well as more locally in Vancouver, Portland, Chicago and other cities, attracting a global audience and has been featured in one of KQED’s SPARK television segments. I am pleased that Micaela Van Zwoll has chosen to feature this work as one of the video pieces she will be representing.

To make this video, I ask strangers at different events or from specific demographics ranging from Chinese New Year’s Parade to surfers on a beach to taxi drivers in India for a photograph. Without telling them, I switch my digital camera to video mode, capturing them posing for the camera with fixed smiles and uncertain looks. There are 17 “episodes” each lasting for 2-3 minutes.

After the session, I let them in on the trick and to date, everyone has laughed at themselves as they strike a pose that reveals their truer selves. Advancing the notion of portraiture into video form, I draw links in this work to a cultural shift to a documentation-based global world.

Here is one such segment from San Francisco Wondercon convention.