I’m experimenting with a new model for sustainable art practice: leveraging the intellectual property from my technology-infused artworks into lucrative contracts. And why not? Artists are creative engines and deserve to be compensated.

Teaching is how many of my ilk get their income and every professor I’ve talked to about the university-academia track constantly moans about the silo-like environment, the petty politics, the drudgery of the adjunct lifestyle and the low pay. They are overworked and burdened by administration. No thanks.

The other option is full-time work. Recently (2012-13), I was on full-time staff at the Exploratorium as a New Media Exhibit Developer. I love the people, the DIY shop environment and the mission of the organization. It was here that I fully re-engaged with my software coding practice and learned some of the basics about data-visualization. But, ultimately a full-time job meant that I wasn’t making my own artwork. My creative spirit was dying. I couldn’t let this happen, so when my fixed-term job came up, I decided not to try to pursue full-time employment. I now work with the Explo on selected part-time projects.

This year, I started an LLC and in January, I had landed my first contract job, which was to do the software coding, technical design and visitor interaction for a project called “EEG Dinner Party”, which was part of a larger installation for General Electric, which they called the “GE BBQ Research Center” to be presented at SXSW in Austin. 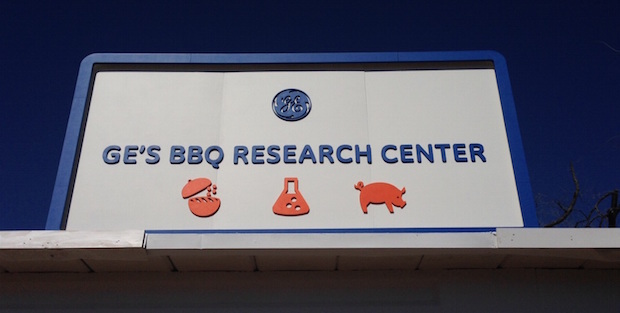 The folks I directly worked with were Sheet Metal Alchemist (Lara and Sean who run the company, below) — they are fantastic company who build custom-fabrication solutions. They helped General Electric produce this interactive experience for SXSW, which featured a giant BBQ smoker with sensors and the EEG Dinner Party, which was the portion I was working on. 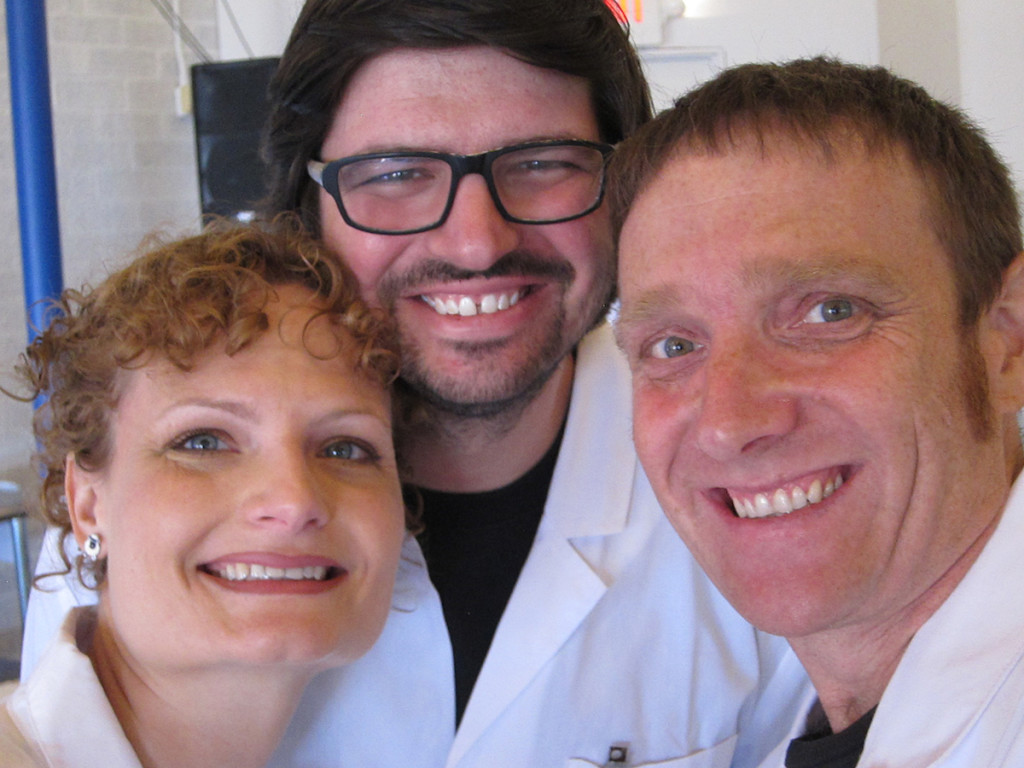 My “intellectual property” was my artwork, After Thought (2009), which I made while an artist-in-residence at Eyebeam Art + Technology Center in New York. This is a portable personality testing kit using EEG brainwaves and flashcards, where I generate a personal video that expresses your “true” personality. I dressed in a lab coat and directed viewers in a short, 5-10 minute experiment with technology and EEG testing. 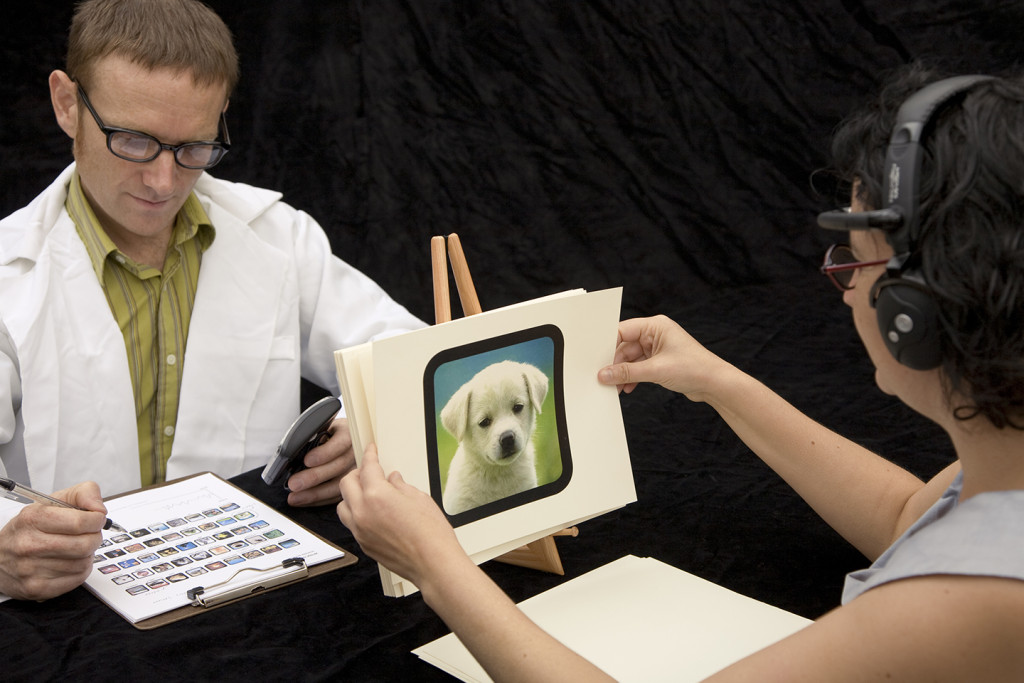 When the folks at Sheet Metal Alchemist (SMA) contacted me about doing the EEG work, I was confident that I could transform the ideas behind this project — an interactive experience into one that would work for SXSW and General Electric.

From the get-go, I knew this wasn’t my art project and I didn’t have my usual the creative control. For one, General Electric that had a very specific message: “Your Brain on BBQ” and the entire SXSW site was designed as a research lab, of sorts. It was a promotional and branding engine for GE, who provided free meat and beer for the event.

The work that SMA did was just a portion, albeit the attractor (the smoker) and the high-tech demo (EEG) of what was going on, but GE also had videos, displays in vitrines, speakers, DJs and a mix-your-own-BBQ sauce stations. New Creatures were the ones that put the entire event together (check out the video at the end of this post).

The irony: I don’t even eat meat. 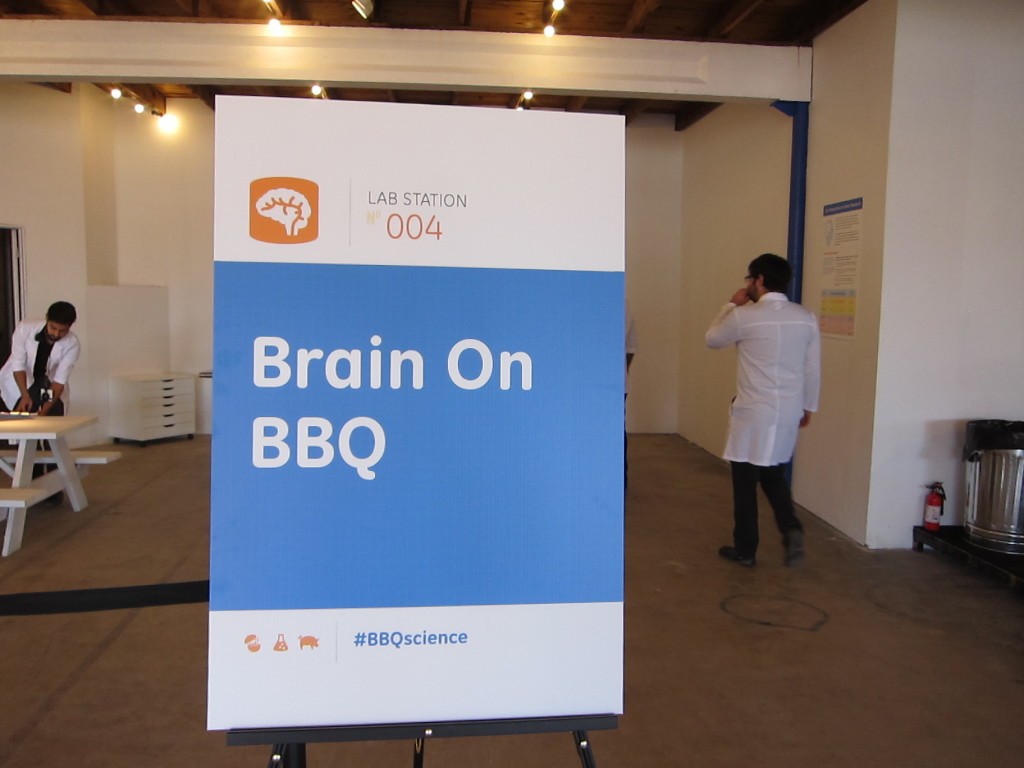 I treaded the delicate balance doing of doing client work combined with my own artistic/tech designs. While I don’t work for GE, nor is their message mine, we’re all in it for a temporary goal: to produce a successful event. The end-result was an odd compromise of social-messaging, technology and visitor experience, which ended up being a very successful installation at the event.

The concept was the we conduct a series of “dinner parties” (it was actually during the day) where two tables of four people each would sit down and eat a 5-minute “meal”. We would track their brainwaves in real-time and generate a graph showing a composite index of what they were experiencing.

All of the event staff costumed ourselves in lab coats. Here I am with the two monitor display, wearing the EEG headset, which we chose: the Muse Headset, which after doing a lot of research, beat the pants off the competitors, Neurosky and Emotiv for its comfort and developer’s API. 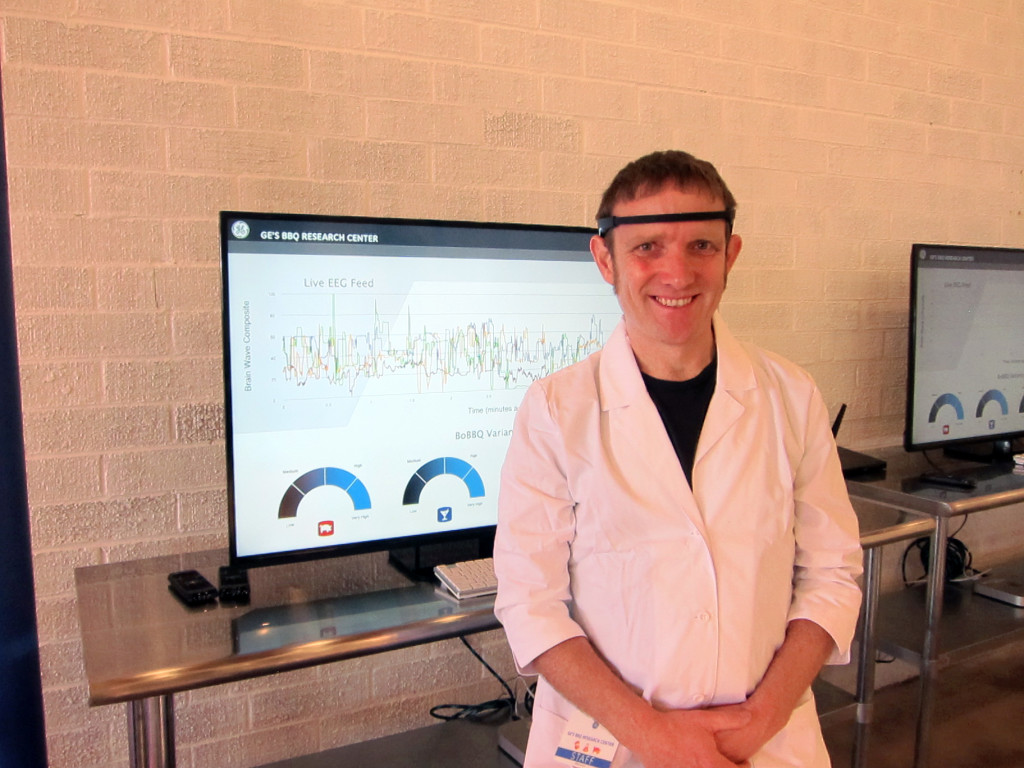 The technical setup took awhile to figure out, but I finally settled upon this system, which was very stable. Each of the eight headsets was paired to a cheap Android tablet. The tablet then streamed the EEG data to two separate Processing applications, one for each table via Open Sound Control (OSC). 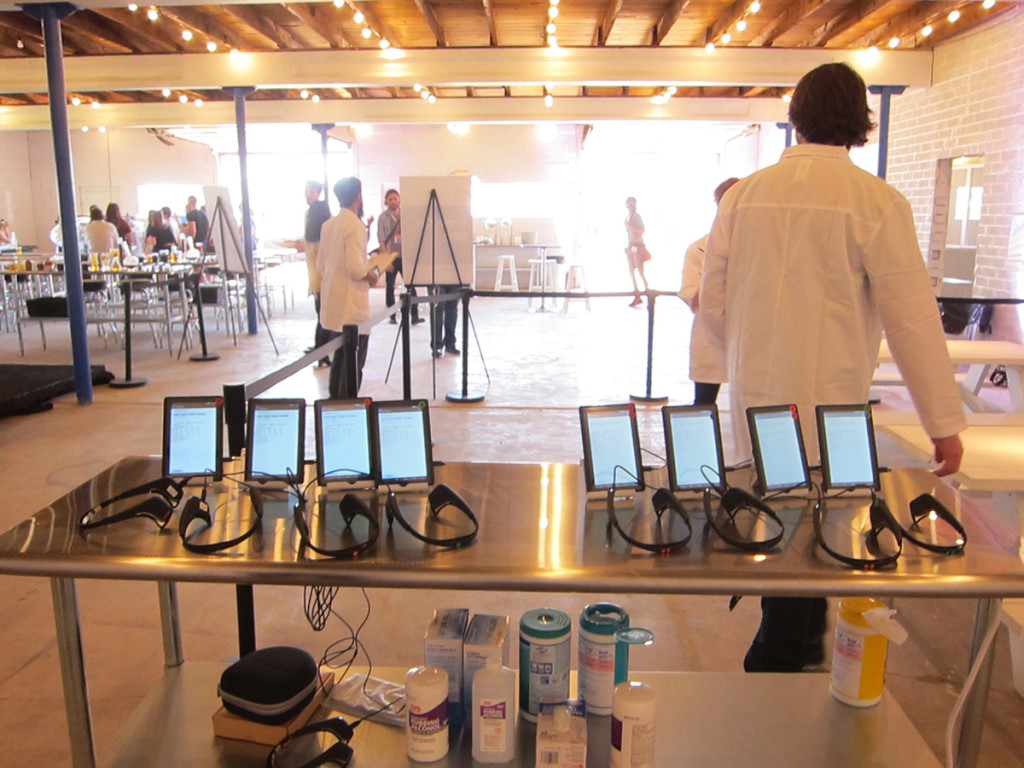 The tablet software that I wrote was based on some of the Android sample code from Muse and would show useful bits of information like the battery life and connection status for the 4 headset sensors. Also check out the “Touching Forehead” value. This simple on/off was invaluable and would let us know if the headset was actually on someone’s head. This way, I could run tables of just 1 person or all 4 people at a time. 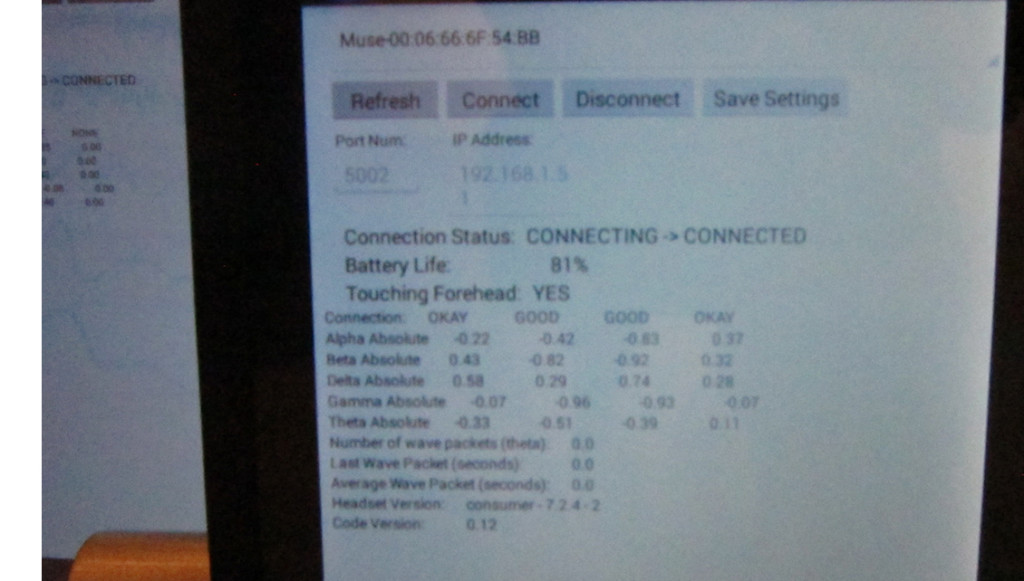 Each headset was assigned to a separate graph color and icon. My software then graphed the real-time composite brainwave index over the course of 5 minutes. The EEG signals are alpha, beta, delta, gamma and theta waves. But, showing all of these would be way too much information, so I produced a composite value of all 5 of these, weighting certain waves such as beta and theta waves (stress and meditation) more than others such as alpha (sleep). 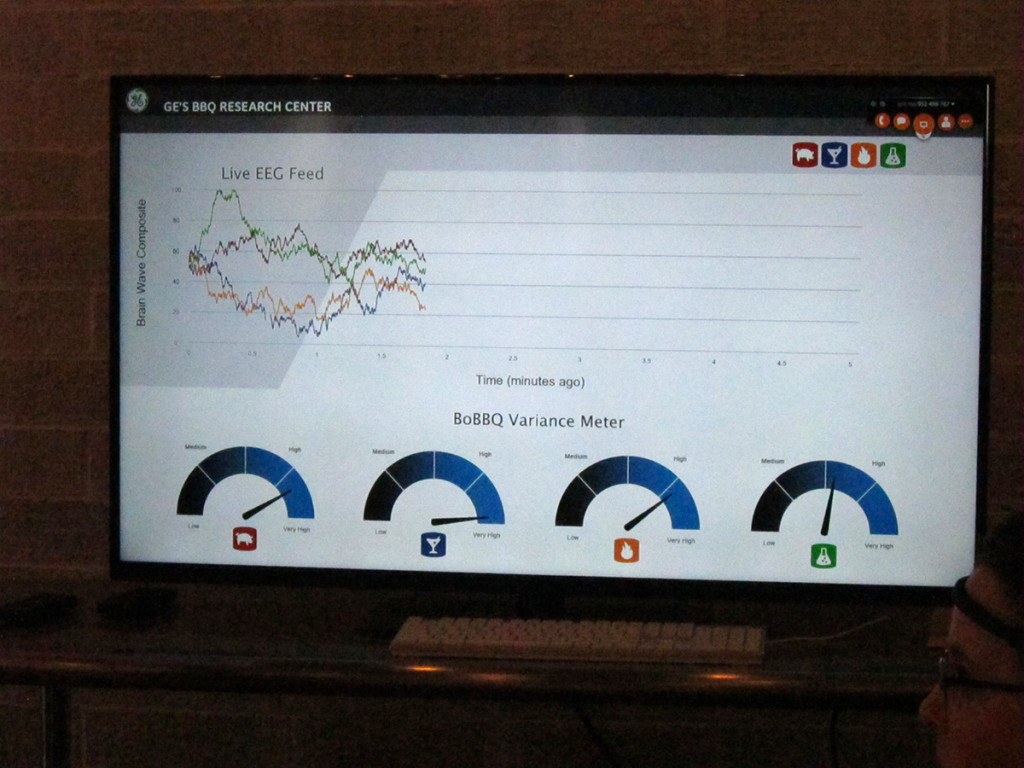 We ran the installation for 3 days. We soon has an efficient setup for registration and social media. You would make a reservation ahead of time and a greeter would fill in the spots on for empty tables. 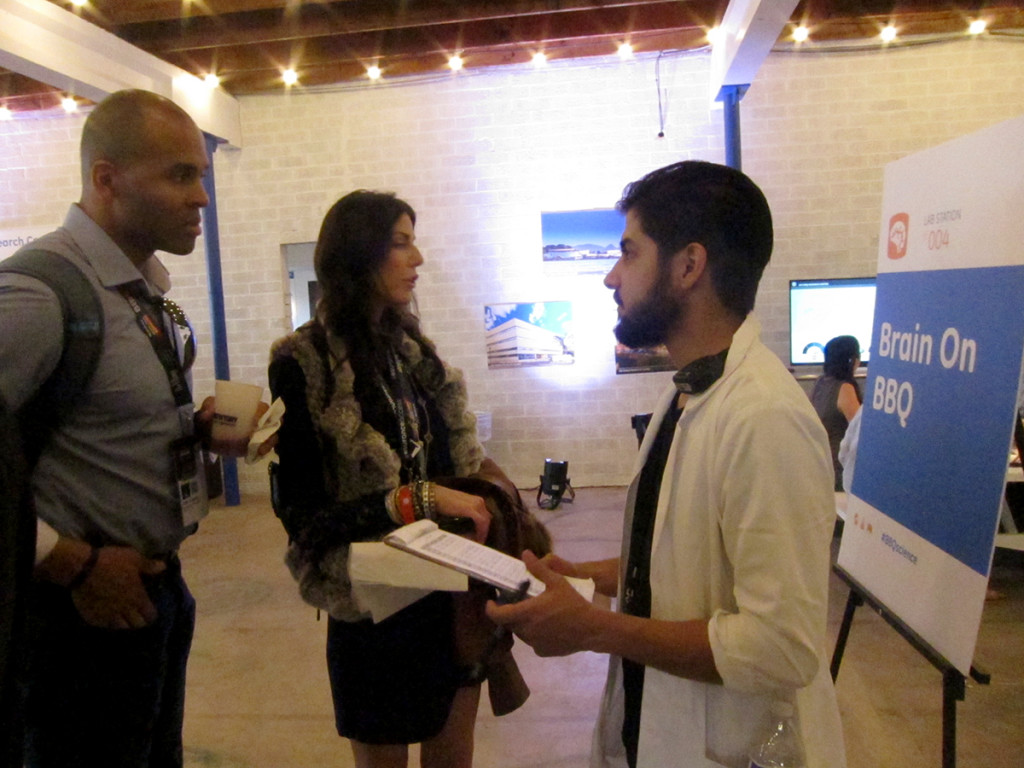 The next lab technician would have everyone digitally sign consent forms and ask for their personal information such as your name and Twitter handle. 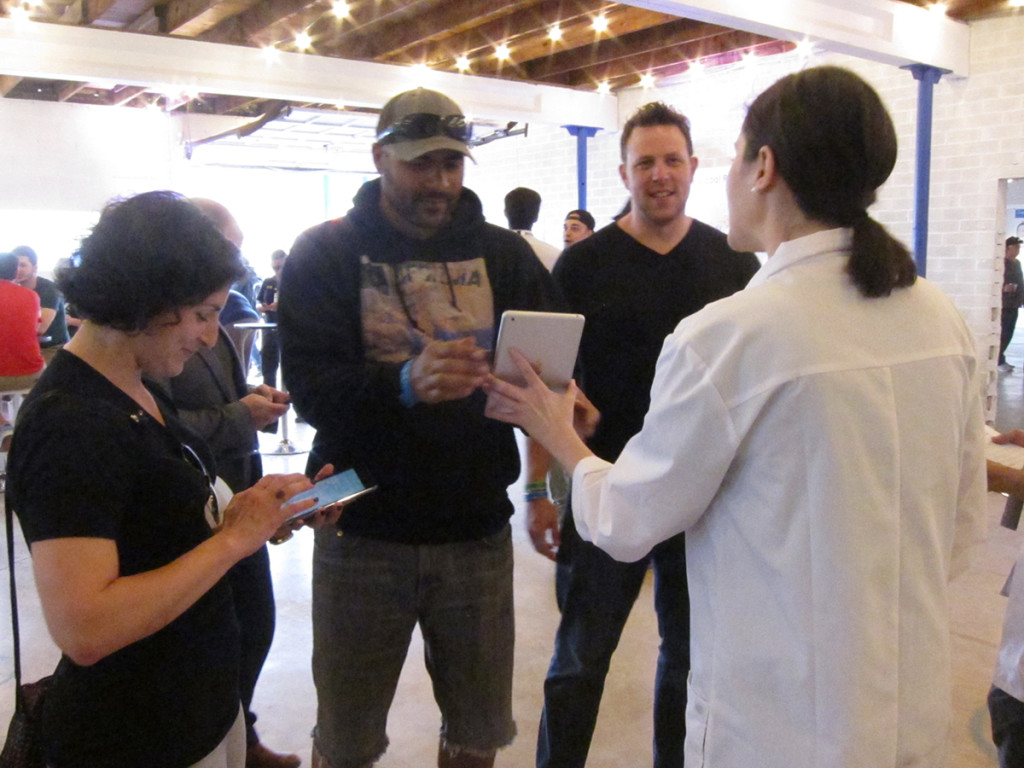 We soon had a reasonably-sized line. 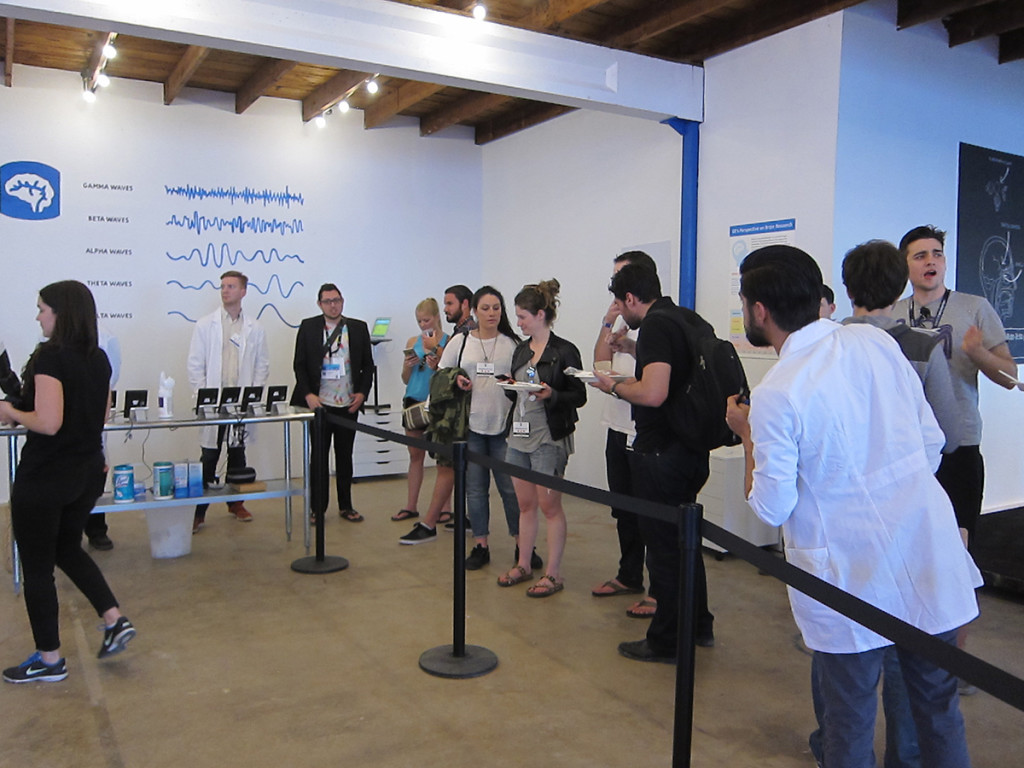 My job was to make sure the technology worked flawlessly. I would clean headsets, check the tablets, do any troubleshooting, as necessary. Fortunately, the installation went off very smoothly. We had just one headset stop working one the 2nd day and on the 3rd day, a drunk guest knocked one of the tablets off the table, shattering it. Of course, we had backups.

After fit all the guests with the headsets and make sure the connections worked, I’d pass the them off to Sean, who talked about EEG signals and answered questions about what the installation was all about. After about 5 minutes, we had people sitting at tables. 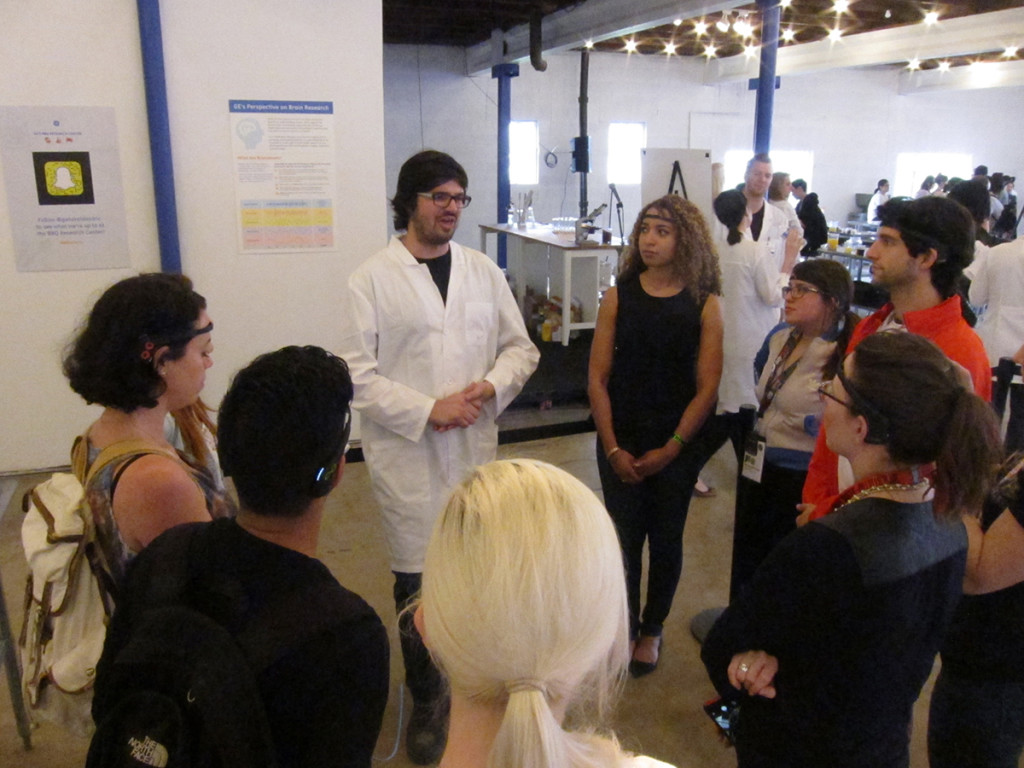 Then, they got served. Food, that is. 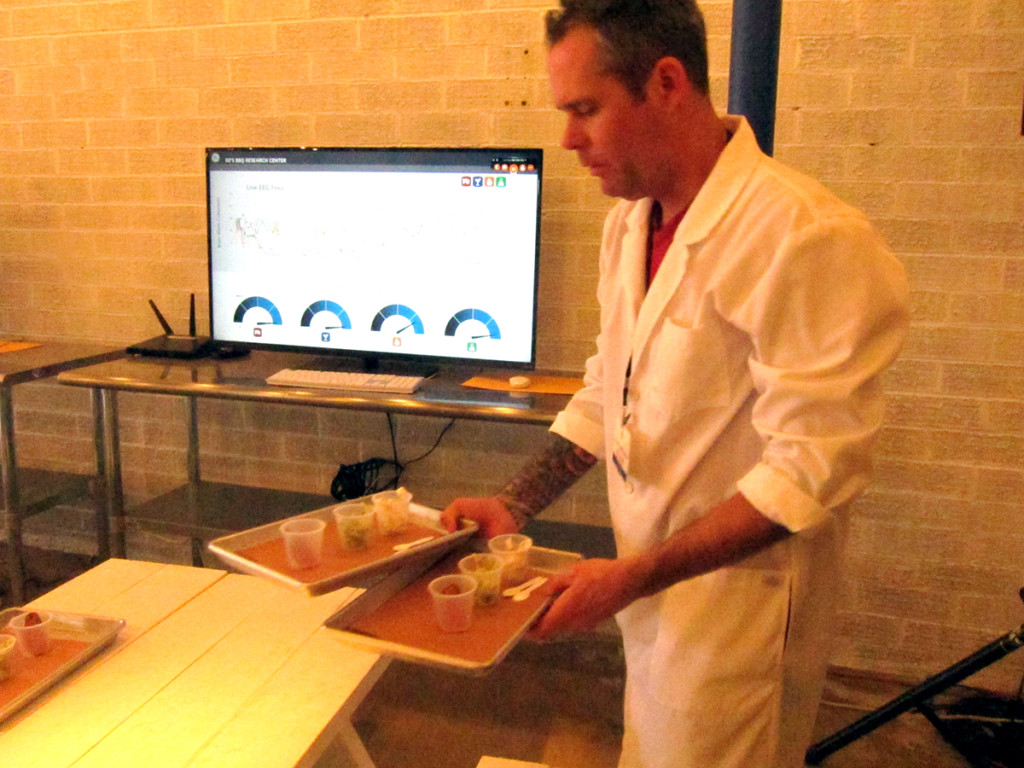 Here is a piece of sausage from the smoker, some coleslaw and a bit of banana cream pudding. 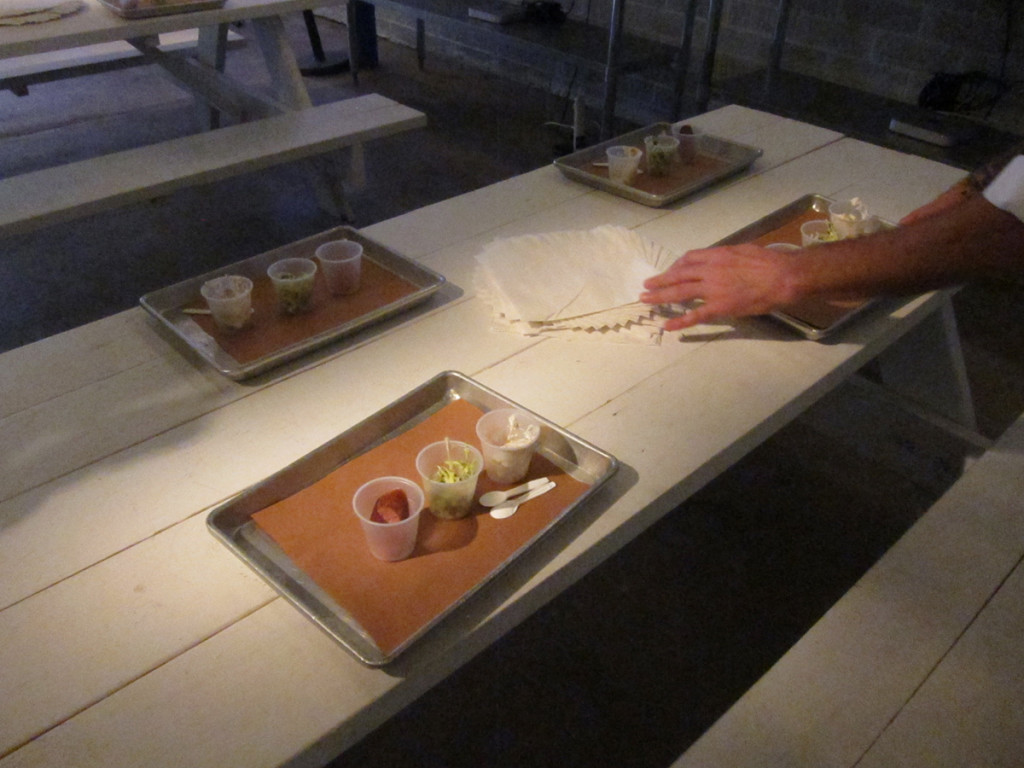 As folks ate, they watched their brainwaves graph in real-time. 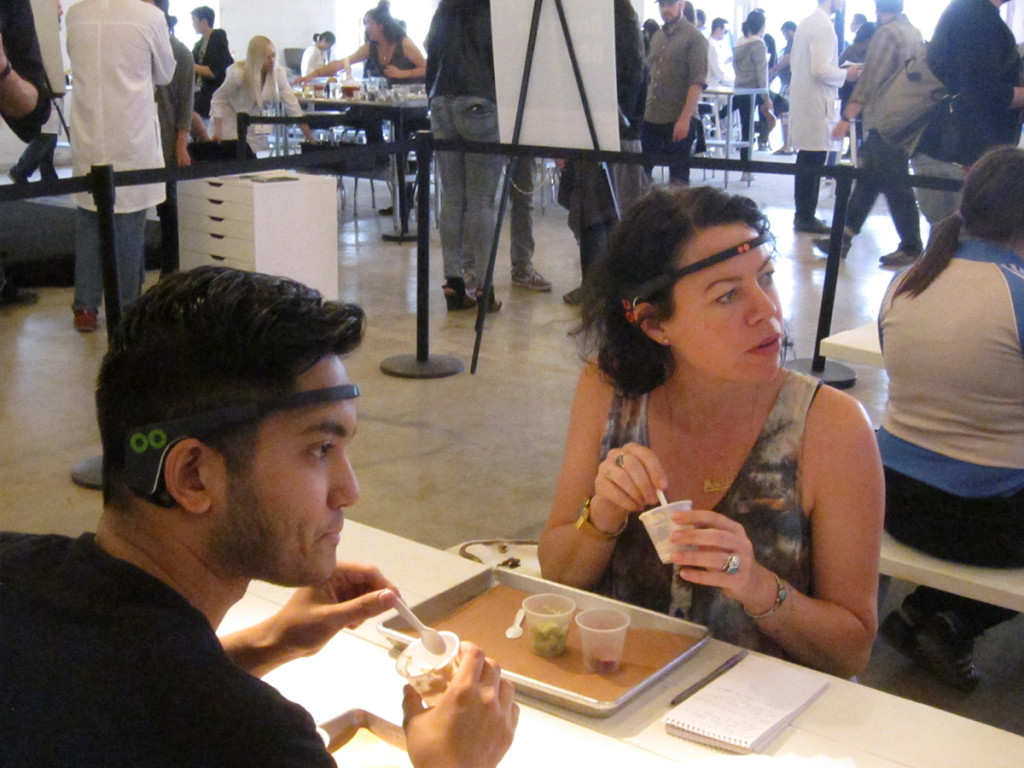 Each headset was marked with the corresponding color on the graph. One dot was for Table A and two for Table B. 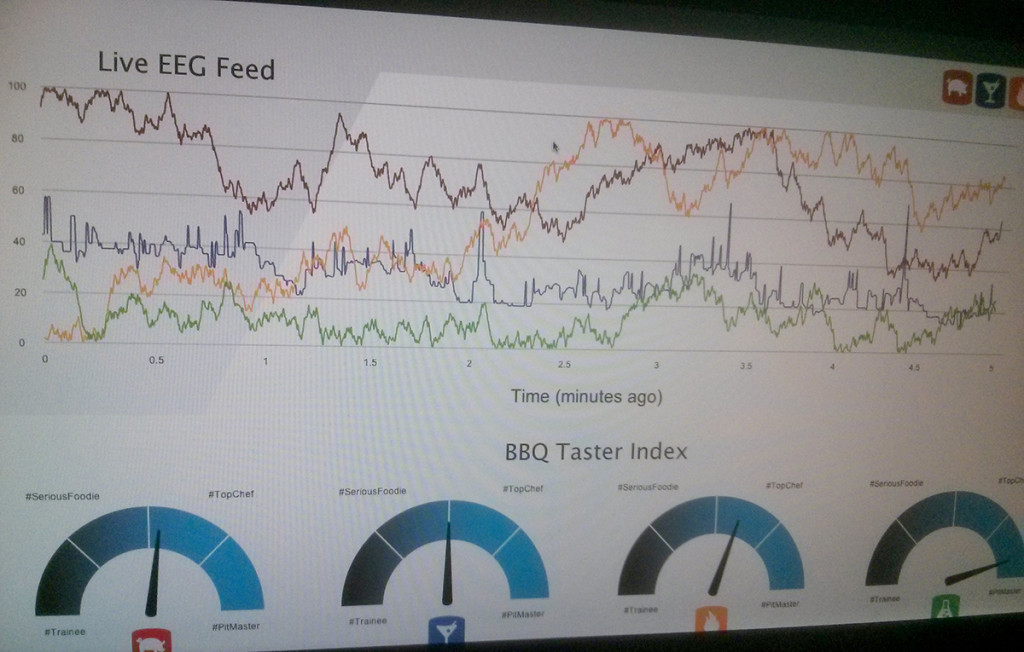 The guests got a kick out of it, that’s for sure. 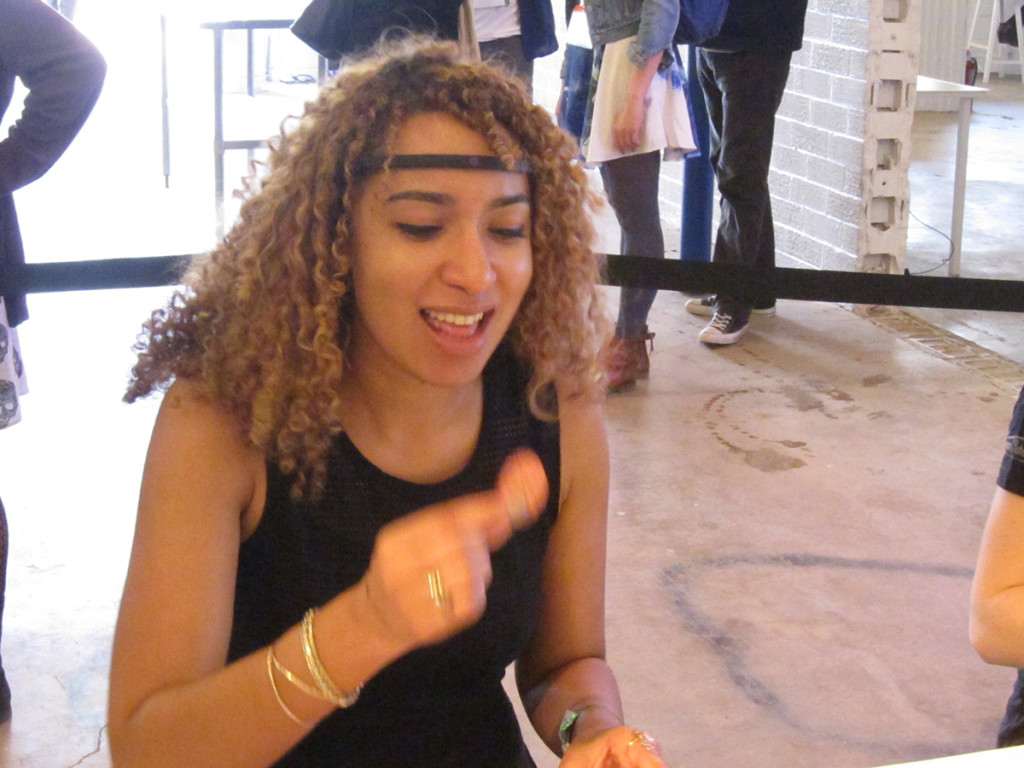 And while they consumed food, the photographer shot closeups of people eating. 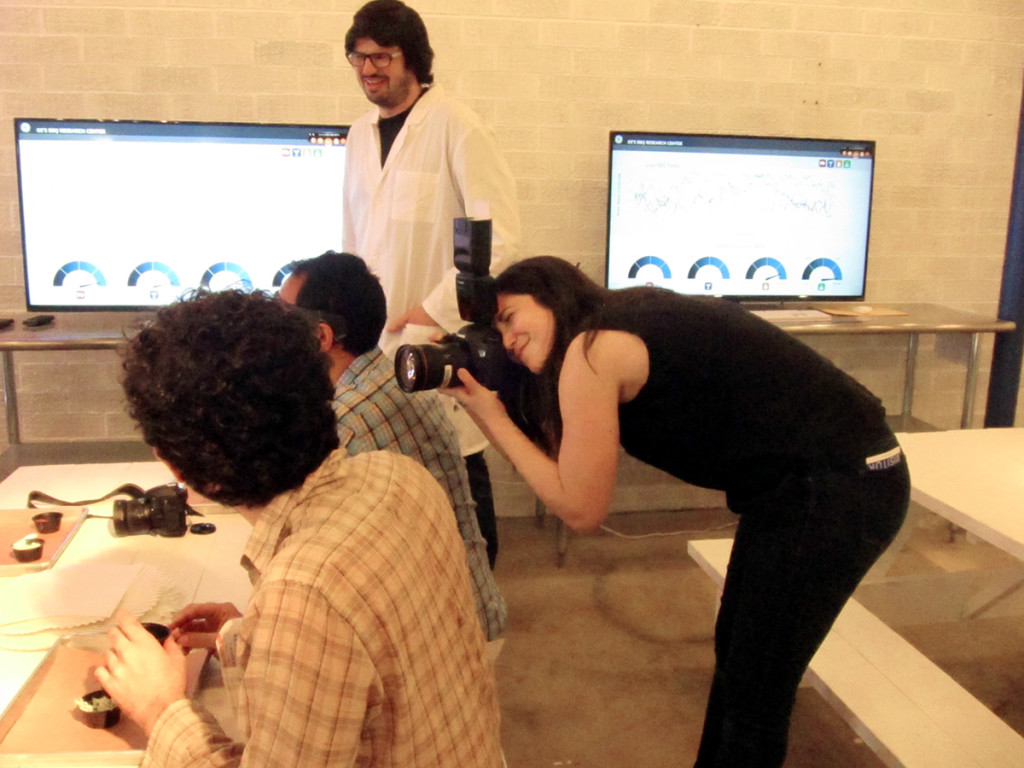 If you chose to be at the EEG Dinner Party, you certainly had to have no fear of the media. 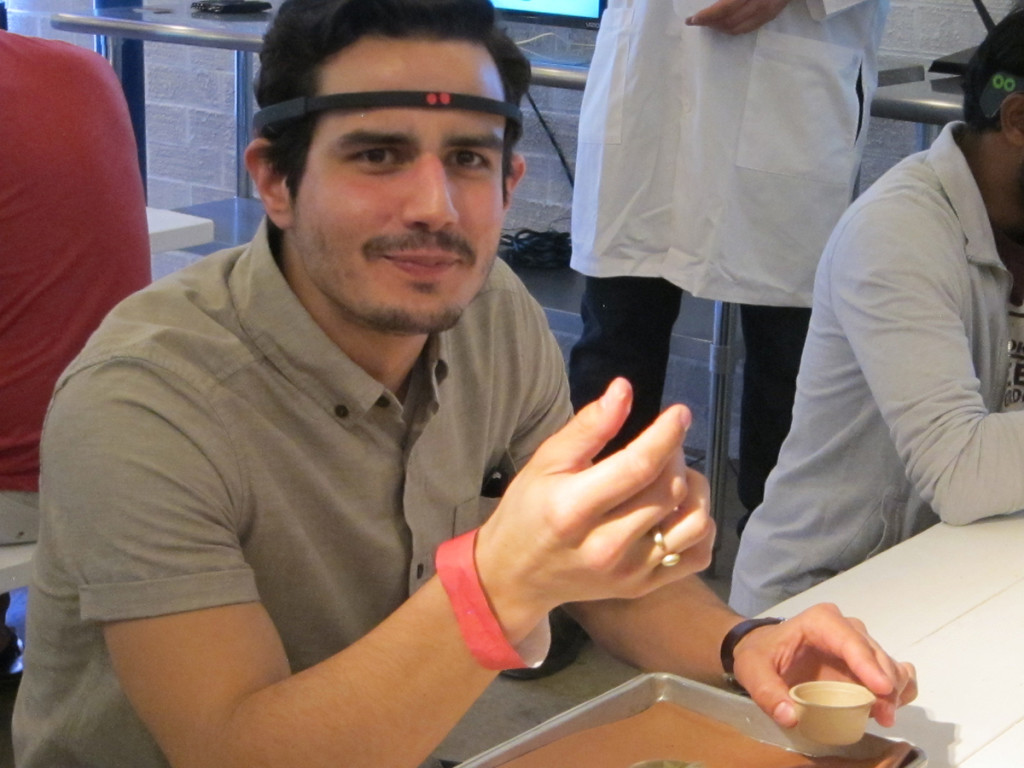 Then, the social media team would do a hand-tracing of the graph and send out an animated image via Twitter, like these. 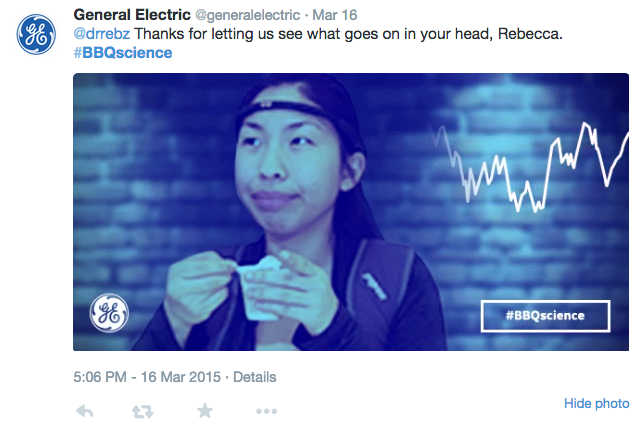 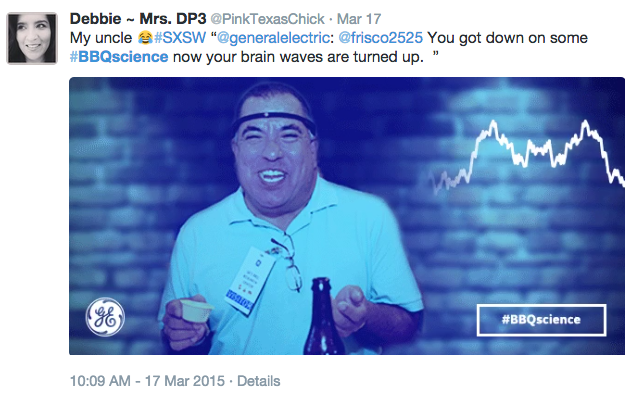 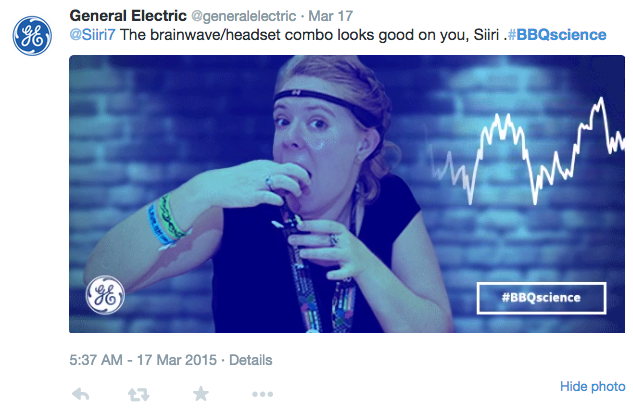 Of course, they ended up getting retweeted. 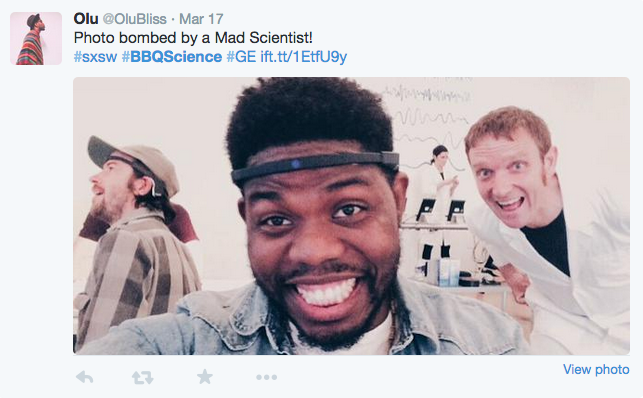 And we had some celebrities! Here is Questlove. 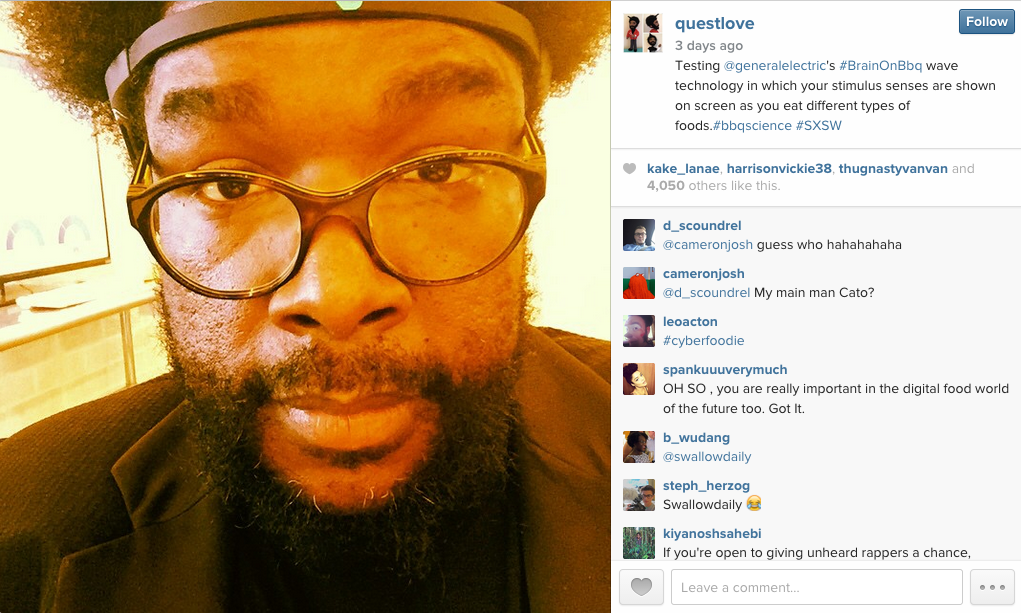 My concluding thoughts on artwork-as-IP: it’s solid paid work. My billable rate is at least 3 times higher than any non-profit work that I do, which translates to a more sustainable art practice. My coding skills got sharper — this was my first Android application. I didn’t feel like I had to dial in the fine creativity and was more of a tech lead on the project. So, overall a success and I’m hoping I can do some future paid gigs with my technology-based artwork.

Panned by 7×7! Water Works, NPR and Imagination
Scroll to top