Last week, I posted an online map of the 67 Emergency Drinking Water Hydrants in San Francisco. It was covered in SFist, got a lot of retweets and coverage.

I felt a semblance of pride in being a “citizen-mapper” and helping the public in case of a dire emergency. I wondered why these maps weren’t more public. I had located the emergency hydrant data from a couple of different places, but nowhere very visible.

Apparently, these hydrants are not for emergency use after all. Who knew? Nowhere could I find a place that said they were discontinued.

Last Friday, the SFPUC contacted SFist and issued this statement (forwarded to me by the reporter, Jay Barmann):

The biggest concern [about getting emergency water from hydrants] is public health and safety. First of all, tapping into a hydrant is dangerous as many are high pressure and can easily cause injury. Some are very high pressure! Second, even the blue water drop hydrants from our old program in 2006 (no longer active) can be contaminated after an earthquake due to back flow, crossed lines, etc. We absolutely do not want the public trying to open these hydrants and they could become sick from drinking the water. They could also tap a non-potable hydrant and become sick if they drink water for fire-fighting use. After an earthquake, we have water quality experts who will assess the safety of hydrants and water from the hydrants before providing it to the public.

AND of course, no way should ANYONE be opening hydrants except SFFD and SFWD; if people are messing with hydrants, this could de-pressurize the system when SFFD needs the water pressure to fight fires, and also will be a further distraction for emergency workers to monitor.

We are in the process of updating our emergency water program… We are also going to be training NERT teams to help assess water after an emergency.

Uh-oh.  Jay wrote: “It had sounded like designer Scott Kildall, who had been mapping the the hydrants, had done a fair amount of research, but apparently not.”

Was I lazy or over-excited? I don’t think so. I re-scoured the web, nowhere did I find a reference to the Blue Drop Hydrant Program being discontinued.

My reference were these two PDFs (links may be changed by municipal agencies after this post). 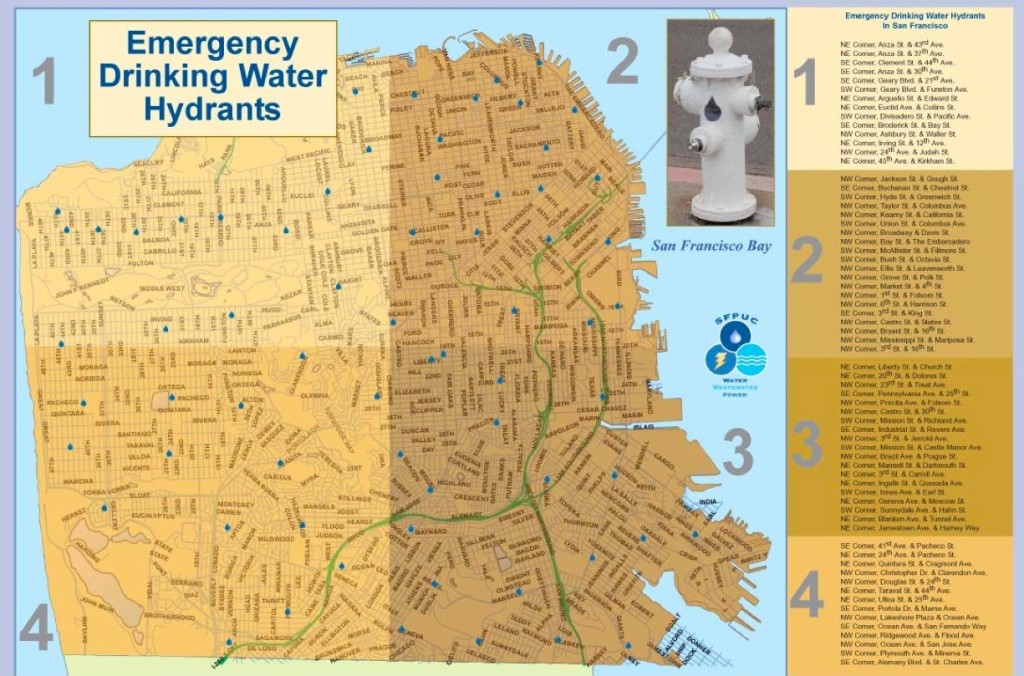 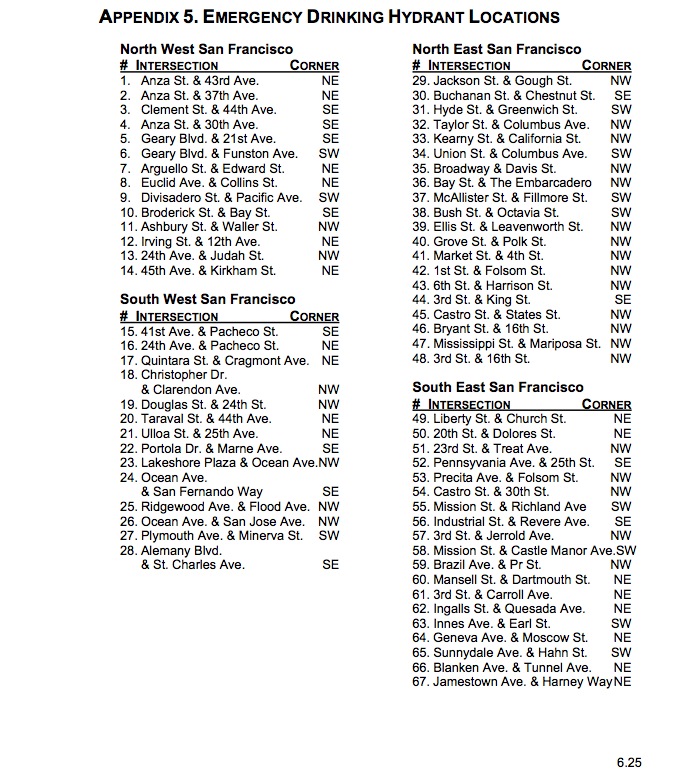 ** I have some questions **
(1) Since nowhere on the web could I find a reference to this program being discontinued, why are these maps still online? Why didn’t the SFPUC make a public announcement that this program was being discontinued? It makes me look bad as a Water Detective, Data Miner, but more importantly there may have been other people relying on thse hydrants. Perhaps.

(2) Why are there still blue drops painted on some of these hydrants? Shouldn’t the SFPUC have repainted all of the blue drop hydrants white to signal that they are no longer in use?

(3) Why did our city spend 1 million dollars several years ago (2006) to set up these emergency hydrants in the first place when they weren’t maintainable? The SFPUC statement says: “even the blue water drop hydrants…can be contaminated after an earthquake due to back flow, crossed lines, etc.”

Did something change between 2006 and 2014? Wouldn’t these lines have always been susceptible to backflow, crossed lines, etc. when this program was initiated? 1 million bucks is a lot of money!

(4) Finally, and the most prescient question is why don’t we have emergency drinking hydrants or some other centralized system?

I *love* the idea of people going to central spots in their neighborhood case they don’t have access to drinking water. Yes, we should have emergency drinking water in our homes. But many people haven’t prepared. Or maybe your basement will collapse and your water will be unavailable. Or maybe you’ll be somewhere else: at work, at a restaurant, who knows?

Look, I’m a huge supporter of city government and want to celebrate the beautiful water infrastructure of San Francisco with my Water Works project, part of  the Creative Code Fellowship with Stamen Design, Gray Area and Autodesk. The SFPUC does very good work. They are very drought-conscious and have great info on their website in general.

It’s unfortunate that these blue drop hydrants were discontinued.

It was an heartening tale of urban planning. I wish the SFPUC had contacted me directly instead of the person who wrote article. I’ll plan to update my map accordingly, perhaps stating that this is a historical map of sorts.

By the way, you can still see the blue drop hydrants on Street View: 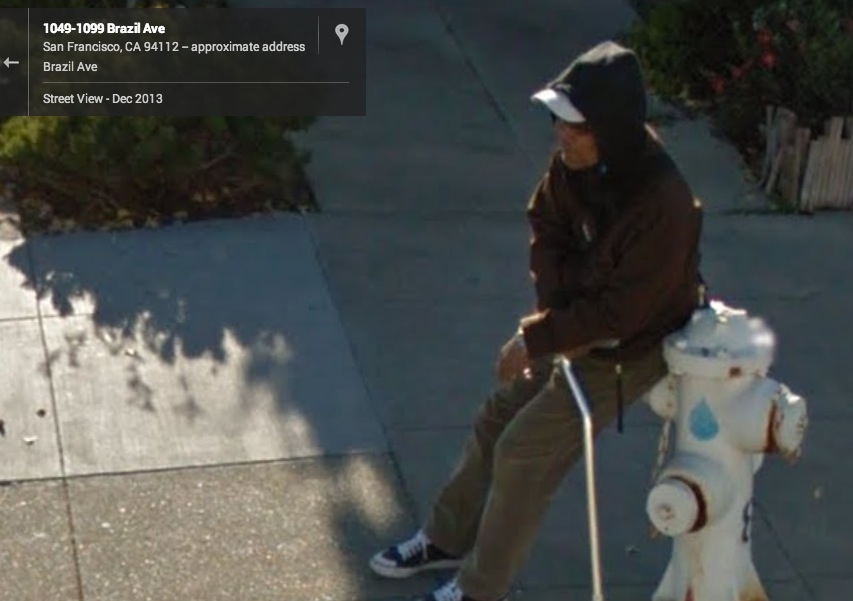 And here’s the Facebook statement by SFPUC — hey, I’m glad they’re informing the public on this one! 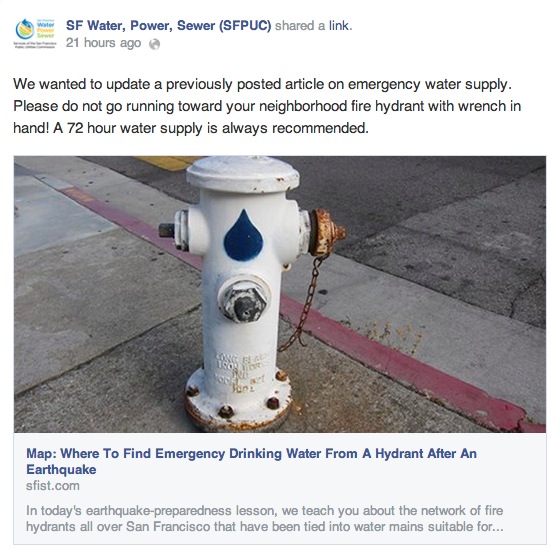