As part of the “2049” project for the Regeneration show at the New York Hall of Science, I will be burying a time capsule called “Imagine 2049” on the grounds of the NYSCI.

I will be asking visitors both locally and remotely to submit inventions that might help people in the year 2049 such as medical devices, personal technologies and ways to sustain the planet. The letters and notes will be buried and opened 36 years from now in the year 2049. 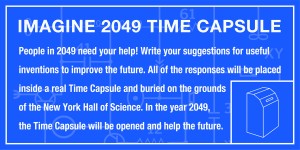 Fortunately for me, both are scheduled to be opened 5000 years in the future, well after the Imagine 2049 Time Capsule.