Learn how to use Augmented Reality with media artist and activist John Craig Freeman! 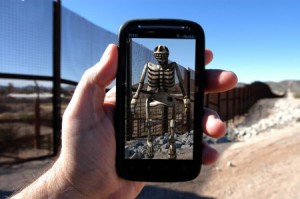 When: Weekend of March 31st-April 1st, 2012
Where: SOMArts, 834 Brannan St., San Francisco
Also: There will be an artist talk by Freeman on March 29th, 7pm as part of the ongoing Upgrade! SF conversations and events.

About the Instructor: John Craig Freeman is a public artist with over twenty years of experience using emergent technologies to produce large-scale public works at sites where the forces of globalization are impacting the lives of individuals in local communities. He has produced work and exhibited around the world including in Xi’an, Belfast, Los Angeles, Beijing, Zurich, New York City, Taipei, São Paulo, Warsaw, Kaliningrad, Miami, Bilbao, Havana, Atlanta, Calgary, Buffalo, Boston, Mexico City, London and San Francisco. Freeman received a Master of Fine Arts degree from the University of Colorado, Boulder in 1990. He is currently an Associate Professor of New Media, at Emerson College (Boston) in the Department of Visual and Media Arts and a Visiting Scholar at the Center for Research in Computing and the Arts, at UC San Diego.

Support for this workshop is provided by Southern Exposure’s Alternative Exposure Grant Program.